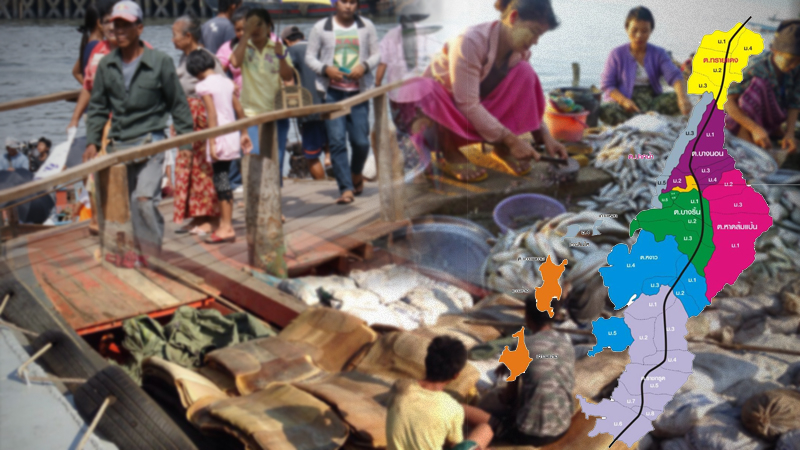 Trade on the Thai-Myanmar border has seen a steep fall in the first 11 months of this year, according to official statistics.

The Office of Provincial Commercial Affairs Ranong also revealed that trade value in each month was lower than the same period year on year of six consecutive years.

The report stated that the trade volume had slumped by over Bt4 billion year on year.

The Office’s director, Wanida Arunothai, said that the trade value in November this year totalled Bt1.83 billion, up by Bt97.65 million or 5.61 per cent over the previous month. The value, however, decreased by Bt51.61 million year on year, contracting 2.71 per cent.

Wanida said Thailand enjoyed a trade surplus in November of Bt345.66 million, up from Bt74.65 or 27.55 per cent from the previous month.

“When compared with the same period of the previous year, the trade surplus is Bt363.17 million,” she said. “Thailand's trade surplus through Ranong province, however, decreased by Bt17.51 million, contracting 4.82 per cent.”

She added trade in November expanded by 27.55 per cent when compared to the previous month.

“Exports grew 8.57 per cent and imports rose 1.57 per cent year on year,” she added. “Thai-Myanmar border trade in Ranong province has remained sluggish for six consecutive months since June due to the overall economy.”

Meanwhile, the president of the Ranong Chamber of Commerce, Theeraphon Chalisarapong, said that cross-border trade in Ranong province is facing trade barriers, resulting in decrease in trade.

“If we consider the Thai-Myanmar trade background, the situation is still good to very good, the expansion of trade channels, and increasing of business partners,” he said. “Therefore, the future trend is good, because sea transportation through the Ranong border is still necessary.”