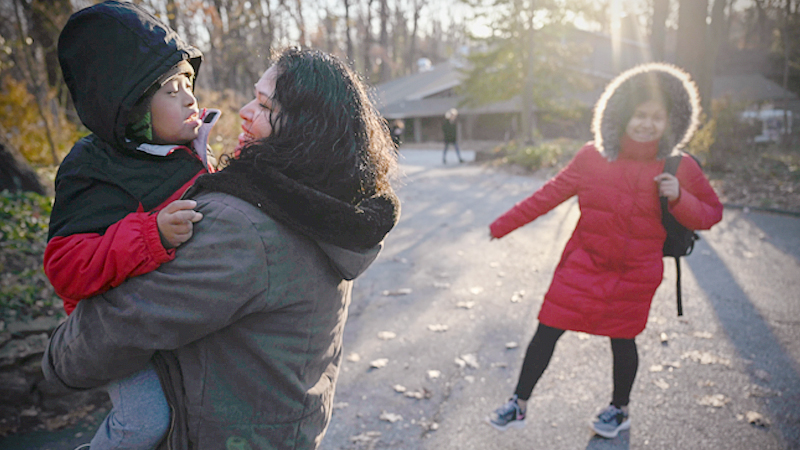 Rosa Gutierez greets her children, John Tojin Gutierrez, 7, left and Maria Salome Guitierrez, after they arrive home at Cedar Lane Unitarian Universalist Church, where they have been seeking sanctuary for the past year. Gutierrez fled to the Bethesda, Maryland, church when she feared she would be deported and separated from her children. MUST CREDIT: Washington Post photo by Michael Robinson Chavez

Next to Rock Creek in Bethesda, Maryland, sits a six-acre church campus shrouded by old cedar trees. For a year and two weeks, this has been Rosa Gutierrez Lopez's home, sanctuary and site of confinement. This year, for the second time, it is where she will spend Christmas.

Gutierrez Lopez, 41, was the first undocumented immigrant in the Washington area to seek protection from deportation at a house of worship - one of the "sensitive location" categories where Immigration and Customs Enforcement agents are discouraged from conducting enforcement activities. 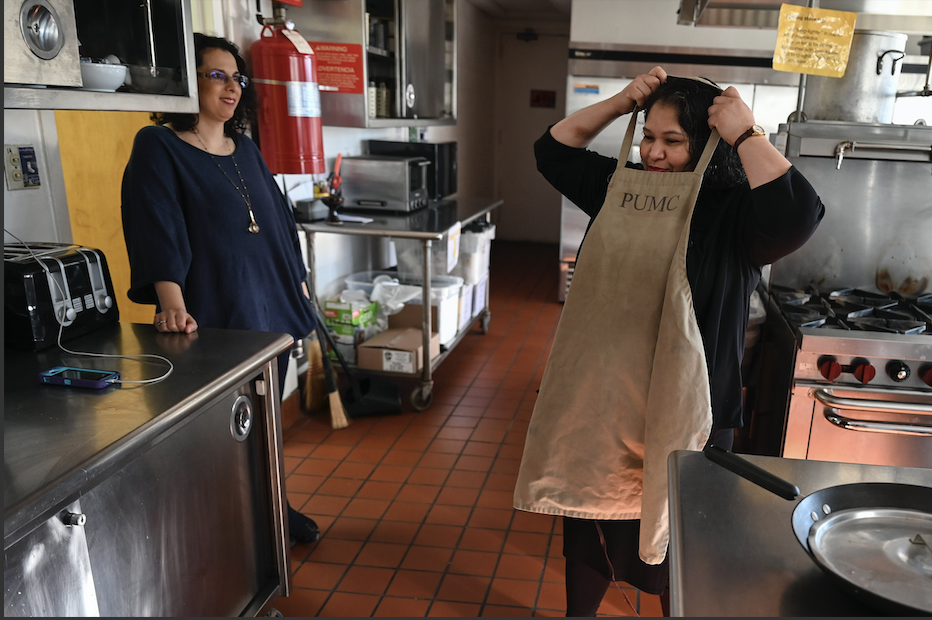 According to the nonprofit Church World Service, there are 49 residents in the United States taking refuge in faith communities. Hundreds of these institutions have designated themselves sanctuaries - a form of protest on the Trump administration's increasing crackdown on undocumented immigrants.

Congregants at Cedar Lane Unitarian Universalist Church had not met Gutierrez Lopez, a Fredericksburg, Virginia, resident, before she arrived at their doorstep one early morning in 2018. And she had not heard of Cedar Lane - had not even known about sanctuary - until several days before her scheduled deportation date: Dec. 10, 2018.

Since then, Lopez has not left the premises, fearful of being arrested and sent back to El Salvador, where she says her relatives have been killed by gang members.

Meanwhile, the church's 1,000 or so members have learned to practice what the Rev. Abhi Janamanchi, the senior minister, calls "the fragile art of hospitality." More than 200 volunteers, from Cedar Lane and 26 other D.C.-area congregations, help facilitate the day-to-day lives and logistics of Gutierrez Lopez and her family.

"It has been an adjustment - both for Rosa and for the community," Janamanchi said. "We can talk about these issues, intellectualize, but to see, actually see . . ."

"It does change us," he continued. "It has changed us."

Over the summer, Gutierrez Lopez's U.S.-born children, ages 12, 10 and 7, moved into the church with her, transferring to schools in the area. Church officials say they asked ICE multiple times to defer her deportation order, and each time, they have received the same response: She needs to submit the application in person, meaning that she needs to leave the church. Lawyers advised against doing so. They recently filed an appeal to reopen her asylum case but have not heard back.

In the new year, Gutierrez Lopez will probably continue relying on the volunteers who help pick up groceries, attend parent-teacher meetings and take the kids out on weekends. There are also others who take on 24-hour "companion" shifts, staying near the family at all times to keep watch and respond to emergencies.

On Christmas Eve, when Gutierrez Lopez goes to sing in the church choir, a volunteer will probably be tasked with looking after her youngest child, John, who has Down syndrome. When John and his siblings, Juan Pablo and Maria Salome, tear open their presents at midnight - a tradition in Latin America - an overnight companion will be nearby.

"People don't understand," said Bilal Askaryar, a senior associate at Church World Service, which monitors sanctuary cases across the country. "Going into sanctuary isn't the end of the story. It's the beginning of a really, really long one."

At weekly video conferences with other immigrants in sanctuary, Gutierrez Lopez has heard stories of those who have been issued $300,000 to $500,000 fines for dodging deportation. Some cry while reading out the letter from ICE, she said. Her advice to them is always the same: "Forget it."

"Please, who has that kind of money?" she said in Spanish during a recent lunch with church staffers. "If I had that money, I'd move to another country."

Those at the table laughed. The comment, they said, is reflective of Gutierrez Lopez's broader attitude toward her situation. Janamanchi calls it "chutzpah," a Yiddish word for "moxie." Gail Schmidt, 72, who tutors Gutierrez Lopez in English, says its her "force of personality."

When the children are at school, Gutierrez Lopez busies herself with yoga, classes, and meetings with activists and lawyers. Recently, when a volunteer pointed out that she had not been in a car for several months, Gutierrez Lopez suggested a joyride - up and down the church's parking lot.

"At the end of the day, this is still confinement, and she knows that more than anyone," Janamanchi said. "But somehow, she manages to find these real moments of joy."

Gutierrez Lopez still has an electronic bracelet from ICE shackled around her ankle. She knows that she may one day receive a notice or, worse, a visit from federal agents, but she is not scared, she said. She is frustrated that her confinement prevents her from speaking out more publicly and helping others at more imminent risk of deportation. At mealtimes, she prays for these immigrants - and for President Donald Trump.

"May he find the compassion he needs . . . to stop the discrimination," she said at lunch.

Cedar Lane congregants voted overwhelmingly in 2017 to designate the church as a sanctuary. When Gutierrez Lopez called a year later, the church had an apartment and bed ready - but little else.

"We built the plane as we were flying it," Janamanchi said. Many of the church's members had long-standing interests in social justice, but these were mostly "theoretical," he added, until this year.

Church leaders decided to take Gutierrez Lopez less than 24 hours after they heard about her case. A day after she arrived, Kathie Bryant, a 72-year-old retiree, joined a five-member core team to figure out how to make it work. Her role is to coordinate the daytime companion shifts that span 8 a.m. to 8 p.m., and in the initial months, she filled many herself.

"This is a brand-new experience for me," Bryant said. "I've taken care of children, grandchildren, my husband - but to have a stranger suddenly in our midst, someone with very real needs. . . . It's brand-new."

Bryant has formed a close relationship with Gutierrez Lopez and her family - the kids greet her with hugs - but a vibrant community has also formed among the volunteers. Most come from the Congregation Action Network, a group of religious institutions that banded together in 2017 to resist the Trump administration's increased immigration enforcement.

One recent evening, Gutierrez Lopez stood over an industrial-size stove in the church kitchen, placing handmade pastelitos - a small Salvadoran turnover - into sizzling oil. The kids were back from school: John lay sprawled out on a piece of cardboard, talking softly at a video game console; Maria and Juan Pablo stood by the large metal refrigerator, looking for soda.

Zellmer, Bryant, Janamanchi and a handful of other volunteers were also around, talking in English and Spanish.

When she moved in, Gutierrez Lopez promised to cook everyone traditional Salvadoran food. She has, Janamanchi said, multiple times. Several weeks ago, she made guacamole and salsa at an event for volunteers. On Christmas, she planned to cook as well.

"Thank you for help me," she said at the volunteer event, giving her first-ever public speech in English. "Thank you for bringing my house here. This, all of us, is my new family."