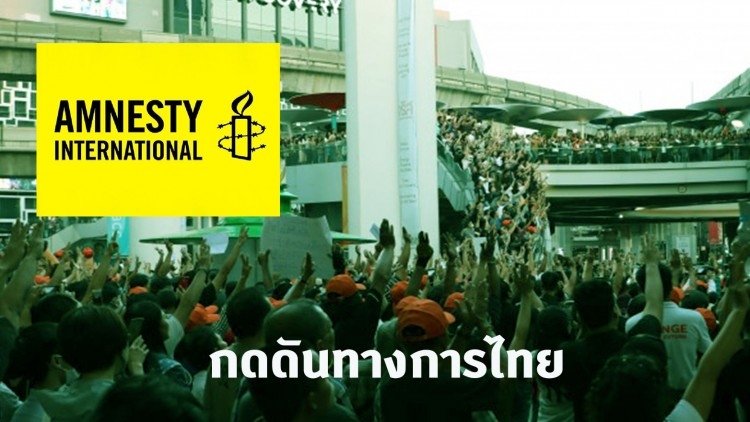 Amnesty International, a UK-based non-governmental organization released a public statement on Tuesday (December 24) urging the Thai government to end the judicial harassment of the political opposition, human rights defenders and activists in Thailand who participated in peaceful protests.

Amnesty International was referring to the one-hour flash mob protest on December 14 at the Pathumwan skywalk in Bangkok, led by Future Forward Party (FWP) leader, Thanathorn Juangroongruangkit, who said that the gathering of his supporters was just a precursor to the “real rally” in January.

After the event, Thanathorn and FWP members were summoned by the authorities for possible violation of laws in organizing the flash mob. Amnesty International therefore urged Thai government to stop using the provisions of the Public Assembly Act that excessively restrict the right to peaceful assembly, and Article 116 – Thailand’s sedition law – which is extensively used to stifle peaceful dissent of activists, human rights defenders, journalist and lawyer.

Thanathorn decided to organize the event after the Election Commission petitioned the Constitutional Court to dissolve Future Forward Party over Thanathorn's Bt191-million loan, which it alleged was illegal for a political party. On November 20, the Constitutional Court unseated Thanathorn as a member of Parliament. The court ruled that he had registered to run in the March election while still holding shares in a media company, in violation of the law.

Amnesty International calls for an end to judicial harassment of the political opposition, human rights defenders and activists in Thailand, as authorities began new criminal proceedings against members of the Future Forward Party and activists because of their recent peaceful protests.

The charges came after tens of thousands of Thais took to the streets on the evening of 14 December for a one-hour flash mob protest in Bangkok, as well as in Chiang Mai, Khon Kaen, and other provinces in northern and northeastern Thailand. These peaceful protests followed the Election Commission’s announcement, on 11 December, that it would recommend that the Constitutional Court order the Future Forward Party’s dissolution.

On the day of the protest, police charged party leader Thanathorn Juangroongruangkit and others with unlawful gathering in public and unlawful use of speakers under the Public Assembly Law.

On Monday, 16 December, Sonthiya Sawasdee, an MP for the majority Palang Pracharath Party, filed a lawsuit against four Future Forward members – leader Thanathorn Juangroongruangkit, spokesperson Pannika Wanich, secretary Piyabutr Saengkanokkul and MP Pita Limjaroenrat. The suit accused the defendants of failing to notify authorities of the gathering, organizing a gathering within a 150 metre of the Royal Court and blocking access to public places; sedition under national security-related Section 116 of the Criminal Code; and violation of the royal institution under Article 6 of the Thai Constitution. If convicted, the party members would face a maximum of seven years’ imprisonment.

In Chiang Mai, the administrator of the Liberal Assembly of Chiang Mai University for Democracy Facebook page–a separate group promoting the protest – was also charged with failure to submit a protest notice to authorities 24 hours prior to the event. This provision under the Public Assembly Law carries a maximum fine of THB 10,000 (approx. USD 3,300) and has been repeatedly used by the authorities to intervene and suppress gatherings throughout Thailand since its enactment under the military government in 2015.

Amnesty International calls on the authorities to stop using the provisions of the Public Assembly Act that excessively restrict the right to peaceful assembly, and Article 116 – Thailand’s sedition law –which is extensively used to stifle peaceful dissent of activists, human rights defenders, journalist and lawyer. These provisions should be repealed or amended to be in line with Thailand’s international human rights obligations and commitments. The authorities must fully respect, protect, promote and fulfil the rights to freedom of expression, peaceful assembly and association. 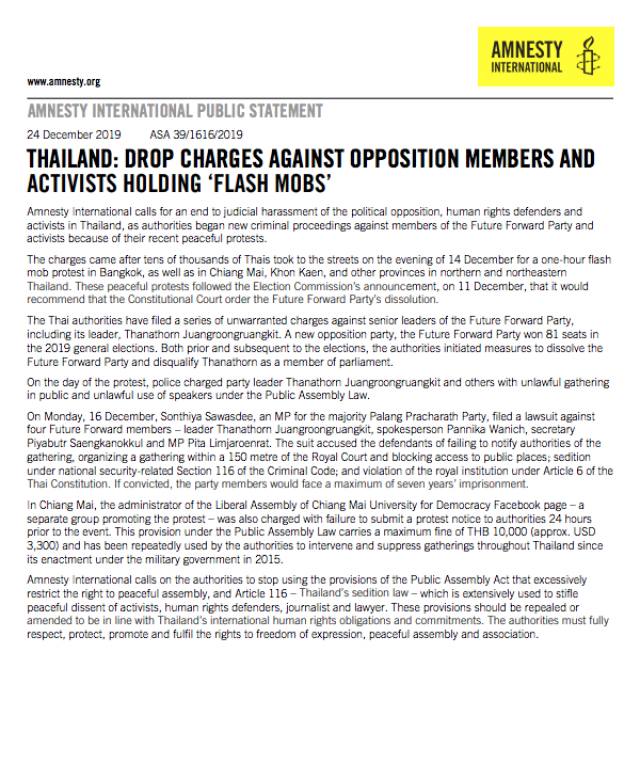