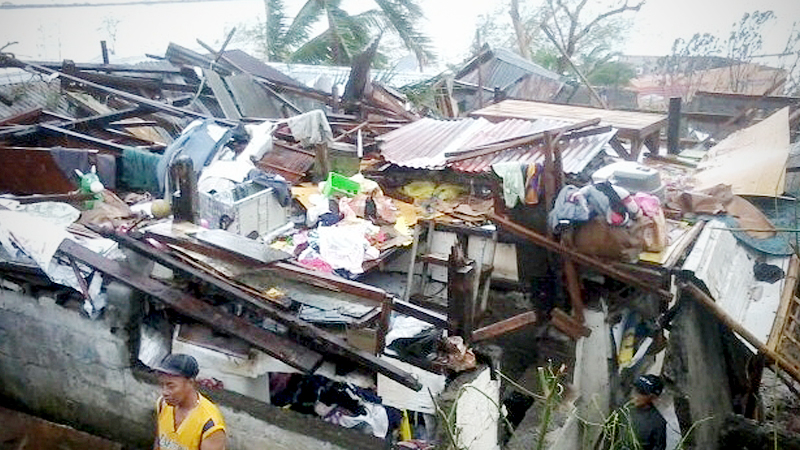 Typhoon “Ursula” (international name: Phanfone) slightly weakened on Thursday as it moved away from land after wreaking havoc across the central Philippines on Christmas Day, killing 24 people.

Thousands of people remained in evacuation centers, where they celebrated Christmas as Ursula tore roofs off houses, toppled trees and electric posts, and caused flooding in remote villages as it swept across central Philippines on Wednesday.

Though much weaker, Ursula tracked a similar path as Supertyphoon “Yolanda” (international name: Haiyan), the country’s deadliest storm on record, which left more than 7,300 people dead or missing in 2013.

With the internet and cellphone networks still cut off in some badly hit areas, a full assessment of storm damage was not immediately possible on Thursday.

But at least 20 people had been confirmed killed in villages and towns in central Visayas, disaster officials said.

Most of the deaths reported by officials were due to drowning, falling trees and accidental electrocution.

The fatalities included three in Leyte and Southern Leyte, four in Capiz and nine in Iloilo. Among the dead were a 13-year-old boy who was electrocuted, a man killed by a flying tree branch and another killed in a car accident.

Six people were reported missing in Western Visayas. Reports of more fatalities and missing were still being verified on Thursday as government agencies conducted an assessment of damage in worst-hit areas in northern Panay Island.

Ursula hit land in Salcedo town, Eastern Samar, late on Tuesday and made six more landfalls as it blew west across central Philippines.

More than 58,000 people were evacuated from their homes before the storm, and they had “noche buena,” the traditional midnight repast to celebrate Christmas, at the evacuation centers.

In the Bicol Region, more than 9,000 people remained in evacuation centers in Masbate and Albay provinces on Thursday, according to civil defense officials.

More than 15,000 people failed to make it home for Christmas, as they were stranded at shuttered ports after the Coast Guard suspended shipping to avoid maritime accidents.

Domestic airlines canceled scores of flights, including services to the airport in Kalibo, Aklan province, which the Civil Aviation Authority of the Philippines reported on Thursday as “heavily damaged.”

The damage to the Kalibo airport stranded tourists on the world-famous Boracay Island, where ferry services were still not working on Thursday even though the typhoon had passed, according to police in Malay, the northernmost town in Panay. Boracay is part of the town.

Ursula’s monster winds leveled houses in Oriental Mindoro province, where a tornado was also reported, and blew the roof off a public market in Occidental Mindoro. In Romblon, the towns of Santa Fe and San Jose remained without communication lines on Thursday. Santa Fe is on the southern tip of Tablas Island, while San Jose is on Carabao Island, which is near Boracay.

National Grid Corp. of the Philippines said restoration efforts continued on Thursday to bring back its downed transmission lines to service.

Knocked out by the storm was the grid operator’s 69-kilovolt transmission line, which delivers power to electric cooperatives in Capiz, Aklan, Eastern Samar, Leyte and Biliran.

Also downed by Ursula was the company’s 138-kV line, cutting electricity to the entire province of Aklan.