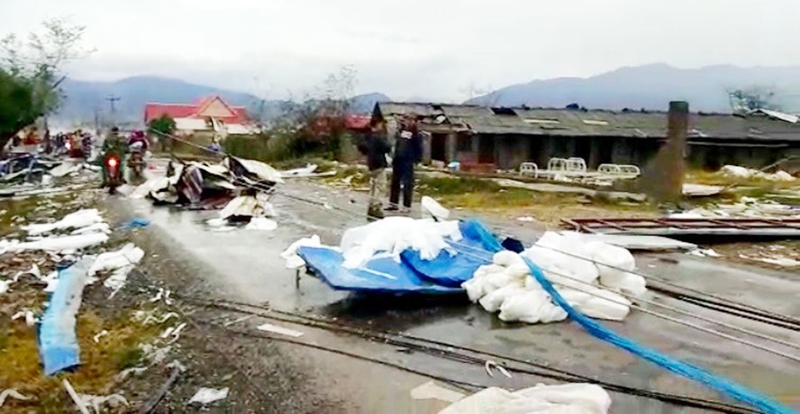 VIENTIANE - Electricity poles and cables, houses, other buildings and some farmland suffered varying degrees of damage when a squall passed through Sing district in Luang Namtha province on December 28.

Strong winds and hail lashed roofs, some of which were torn off and blown to the ground, with residents receiving assistance to carry out repairs.

Fortunately, there were no reports of injury and local authorities are calculating the cost of the damage, an official in charge at the province’s Meteorology and Hydrology Department said.

Seven electricity poles and the cables they carried were brought down in the middle of a road in Sing district. The road remained impassable for a couple of days and power in the area was cut.

However, the poles were re-erected on Monday after the winds eased, the official said.

The total number of households affected was unknown but local authorities provided aid to those in need by helping them to repair their homes.

The public is urged to take care and be alert to the possibility of sudden weather changes, with strong winds, low temperatures and hail all possible.

This year, tropical storms brought wind and torrential rain to many parts of the country, with persistent heavy downpours in August and September.

At least 175,000 households in 1,466 villages of 43 districts in the nation’s southern and central provinces were affected by the storm.

Floodwaters submerged at least 151,000 hectares of farmland, 251 hectares of vegetable plots and 3,266 fishponds, and some 252km of roads were severely affected by the floods.