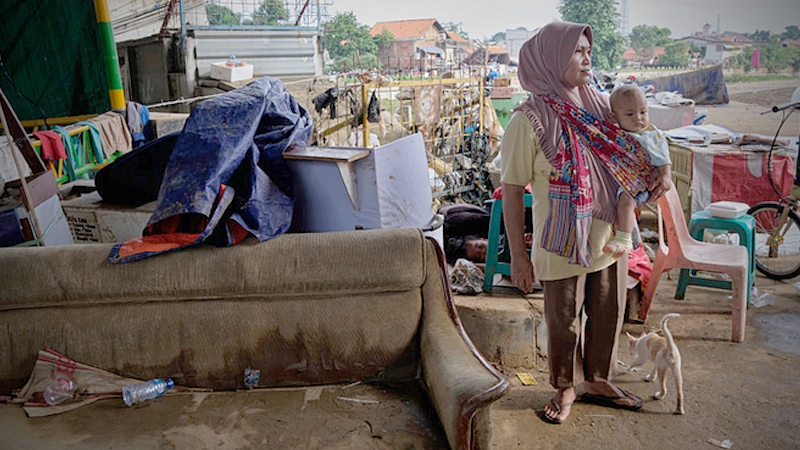 Massive Floods Hit Indonesia's Capital City JAKARTA, INDONESIA - JANUARY 03: An Indonesian woman stands next to salvaged furniture under a highway bridge after being displaced from her home in a flooded neighborhood on January 3, 2020 in Jakarta, Indonesia. Flooding caused by heavy rainfall has left at least 43 people dead and hundreds of thousands displaced from their homes. With more rain forecast, the authorities are using the technique of cloud seeding in an attempt to ease flooding in the capital. (Photo by Ed Wray/Getty Images)

At least 42 people have died from the New Year's Day flooding in Indonesia, and hundreds of thousands were evacuated, as the greater Jakarta area suffered the most intense rain in 24 years.

More than 400,000 people, mostly from Bekasi, east of Jakarta, fled their homes, the National Board for Disaster Management said. Some people in evacuation centers have returned to their houses as flood water subsides and power is turned back on, according to Kompas TV.

As many as 17 people drowned while 12 were killed by landslides, according to BNPB. The agency's tally of 43 victims includes one missing person. Rainfall on New Year's eve was the most in 24 years, according to the nation's weather agency, surpassing the calamities in 2013 and 2007 that also led to widespread flooding.

Power in 85% of the affected areas has been restored, PT Perusahaan Listrik Negara said on Friday. Operations at Halim Perdanakusuma, the city's second-biggest airport, returned to normal on Thursday.

Still, parts of Jakarta and surrounding areas remain flooded and without electricity after rainfall of as much as 377 milliliters a day since New Year's eve. The weather agency expects the adverse weather to persist in the next two weeks.

The economic cost from the calamity could reach 16 trillion rupiah ($1.15 billion) and inflation could pick up, Wellian Wiranto, an economist at Oversea-Chinese Banking Corp. in Singapore, wrote in a note on Friday.

PT Indah Kiat Pulp & Paper, a unit of the Sinar Mas Group, said on Friday that the smallest of its three factories was affected by floods. The plant and the assets are insured, the company told the stock exchange.

President Joko Widodo ordered government agencies on Thursday to prioritize security and rescue measures. The disaster mitigation agency said it will implement weather modification on Friday to reduce the intensity of rain in the Jakarta area.

The government will deploy almost 300 personnel to assess how it can prevent another severe flooding as the weather agency forecasts heavy rain on Jan. 11 to Jan. 15, Public Works and Housing Minister Basuki Hadimuljono told reporters on Friday.

The new capital that Indonesia will build on the island of Borneo will be flood proof, Hadimuljono said.

"While the government may be even more keen to shift its capital city now, the flood is a reminder that the host of issues facing Jakarta - whose metropolitan area is home to 30 million Indonesians - remain acute," Wiranto said.