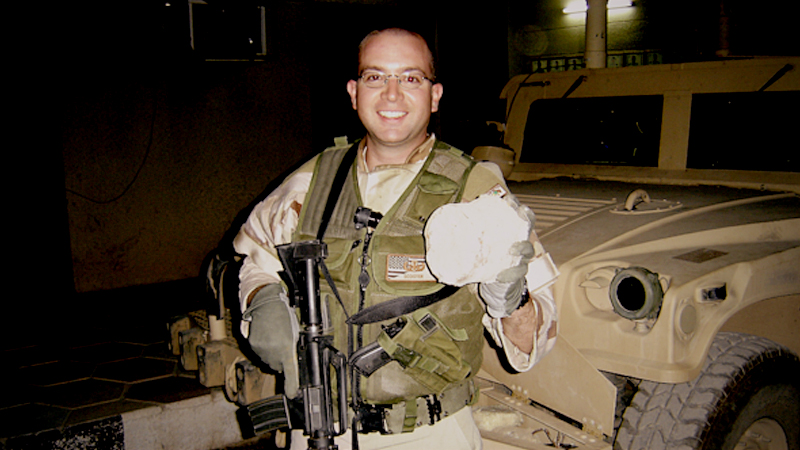 Brian Castner combed over the armored vehicle, mostly intact aside from entry and exit holes rimmed with molten copper that had since cooled.

The U.S. soldiers who had been inside were medevaced near Kirkuk that summer in 2006, leaving the Air Force bomb technician alone with the vehicle. Pools of blood simmered under the Iraqi sun, near what one soldier left behind.

"There was still one foot left in the Humvee," Castner said.

But it also refocused attention on Soleimani's legacy in Iraq, where sophisticated weapons and tactics he oversaw menaced U.S. troops for years, leaving a trail of dead and wounded service members.

The vehicle that Castner inspected was eviscerated by an explosively formed penetrator (EFP), a weapon of Iranian engineering that was salted across battlefields wherever Iranian-backed Shiite militias and fighters gathered, such as Kirkuk and Baghdad's Sadr City, he told The Washington Post on Friday.

The weapons, compact but potent, are deployed against armored vehicles in a way similar to traditional IEDs but are much deadlier and more effective, Castner said. But they are also more complex and difficult to produce.

Shaped like a coffee can but a little smaller, with a slightly concave end, the device is packed with plastic explosives that turn a copper plate into molten slugs that barrel through several inches of armor, sending elongated shards tumbling through bodies and vehicles, and producing entry and exit holes similar to gunshots.

"They were really bad," Castner said, and by far the most-dreaded explosive device he encountered because of their deadly efficiency.

EFPs killed at least 196 U.S. troops and wounded nearly 900 between 2005 and 2011, defense officials revealed in 2015, and Castner said a high number of amputations throughout the war were the direct result of the weapons. In the 2006 attack, slugs took both legs off a soldier and one from a gunner, he wrote in his memoir, "The Long Walk."

The copper slugs, which form into a tadpole shape, can reach Mach 6, or 2,000 meters per second, The Post previously reported. By comparison, a .50-caliber round fired from a sniper rifle has a muzzle velocity of less than 900 meters a second.

Shaped charges have roots in World War II, but their variants, EFPs, were employed by Hezbollah as early as the 1990s against Israelis before migrating to Iraq in 2004, according to the U.S. Army's history of the war.

Soleimani's Quds Force provided EFP training and logistics to militants in Iraq, along with far-reaching supply routes and factories inside the country, the history said, where knowledge and tips on their construction filled CD-ROMs circulated among bombmakers.

Many EFPs were concealed in foam blocks made to look like curbs and rocks, with a telltale indicator of a passive infrared lens peeking through that earned the nickname the "Eye of Allah" from U.S. troops.

Iranian-backed bombmakers were also creative in their defeat of U.S. countermeasures, Castner said.

The infrared sensor, operating in a manner similar to the safety beam used for garage doors, is used to trigger the explosion. Devices called "rhino" horns were attached to U.S. vehicles to set off the EFPs before the targets drew alongside, but bombmakers would revise their design to account for the horns and revamp the geometry of the array to make sure the slugs passed through drivers, passenger compartments and engines, he said.

"We honestly did not believe that these guys were capable of doing this kind of stuff," one senior defense official told The Post in 2007, speaking of the Iranians. "We underestimated them."

The United States spent billions of dollars to curtail the threat of IEDs, but the killing continued long after measures such as radio signal jammers and other equipment saturated the country. The number of EFP attacks peaked in 2008, Military Times reported.

Iran was responsible for at least 603 U.S. deaths in Iraq, defense officials have said, or about a sixth of all fatalities. Hundreds of EFP victims and their family members are seeking damages from Iran in federal court for its role in deploying the weapon, Military Times reported.

Quds Force activity in Iraq reached further than marbling roads with EFPs, and Soleimani's influence was imprinted on various Shiite militias that fought U.S. troops, such as Muqtada al-Sadr's Mahdi Army, which the cleric called on to reactivate in the wake of Soleimani's death.

One of the most daring insurgent operations of the war occurred in January 2007 in Karbala, south of Baghdad, and resulted in the deaths of five U.S. soldiers. Militants in U.S.-style uniforms, carrying forged ID cards and using passable English entered a combined U.S.-Iraqi base in a column of SUVs.

A U.S. soldier was killed there, and four others were abducted and driven miles away. Three were later found dead in or near one of the abandoned SUVs, and the other died on the way to a hospital, the Associated Press reported in 2007.

"The precision of the attack, the equipment used and the possible use of explosives to destroy the military vehicles in the compound suggests that the attack was well rehearsed prior to execution," a defense spokesman later said.