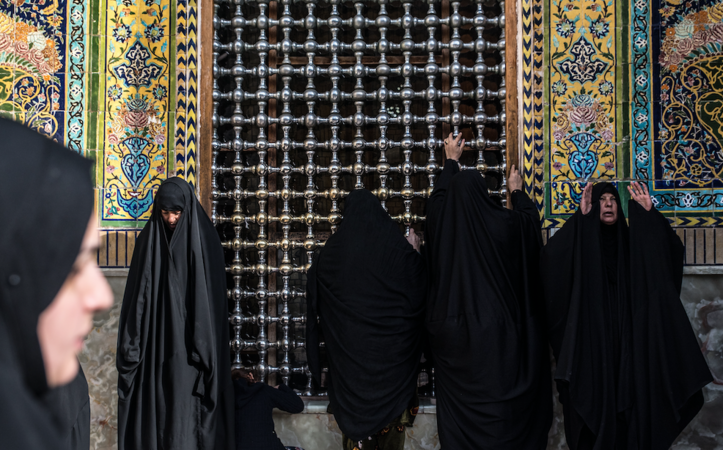 Pilgrims pray at the Shrine of Imam Ali in Najaf, Iraq, on Feb. 14, 2019. MUST CREDIT: Photo for Washington Post by Emilienne Malfatto

The funeral procession for Iranian Maj. Gen. Qasem Soleimani began Saturday in Baghdad, where he was killed a day earlier by a U.S. drone strike.

The next stops for Soleimani's body were the Iraqi cities of Najaf and Karbala, sites that are holy for Shiite Muslims. Soleimani's burial was scheduled for Tuesday in Kerman, his hometown in southeastern Iran, state media in Iran reported.

Najaf is a center for learning and pilgrimage site for Shiites, who make up about two-thirds of Iraqi and the dominant branch of Islam in Iran.

Each year, thousands of Iranians, as well as other religious pilgrims, travel to Najaf to visit the golden-domed shrine of Imam Ali, one of the founding leaders in Islam and highly revered by Shiites. Ali was the cousin and son-in-law of the prophet Muhammad. Shiites consider Ali, who was killed in 661 by a member of a rival sect, as the rightful successor to the prophet.

The city, and the clerics based there, has also been a quiet battleground for Iran in its efforts to extend political, economic, religious and military influence over Iraq, as The Post's Erin Cunningham and Mustafa Salim reported last year.

"In Najaf's dusty warrens, Iran has bankrolled schools and charities, built elaborate mosques and nurtured links with religious scholars in a bid to undermine the local clergy, who have long been fiercely independent," they wrote. "Clerics tied to Iran are promoting its particular brand of state-sponsored Shiite theology in the city's seminaries and have been maneuvering to install one of their own as Iraq's "marja," or supreme religious authority, Iraqi political operatives say."

That position is currently held by Grand Ayatollah Ali Sistani, 89, Iraq's most influential cleric who has opposed some of Iran's core teachings around religious oversight of state affairs.

In November, during the height of protests against the Iraq's political establishment - including its links to Iran - protesters set fire to the Iranian consulate in Najaf.

Karbala is another sacred city in Shiite Islam, revered as the burial place of Imam Hussein. In the late 7th century, Hussein was killed in a battle that marked a doctrinal schism in Islam between Sunni and Shiite Muslims. His death is mourned and memorialized yearly in Shiite tradition known as Muharram, named after the month he was killed.

Karbala is a major pilgrimage site, with the mosque built in Imam Hussein's memory the main destination. Today the mosque is ornately adorned, but the elaborate renovations are relatively new. Under Saddam Hussein's Sunni-led rule, Shiite sites were marginalized.

In the violence and civil war that followed the U.S.-led invasion of Iraq in 2003, Karbala also was a battleground. In 2007, an attack against coalition troops killed five U.S. soldiers stationed there. U.S. officials have blamed Soleimani and his Quds Force for orchestrating it.