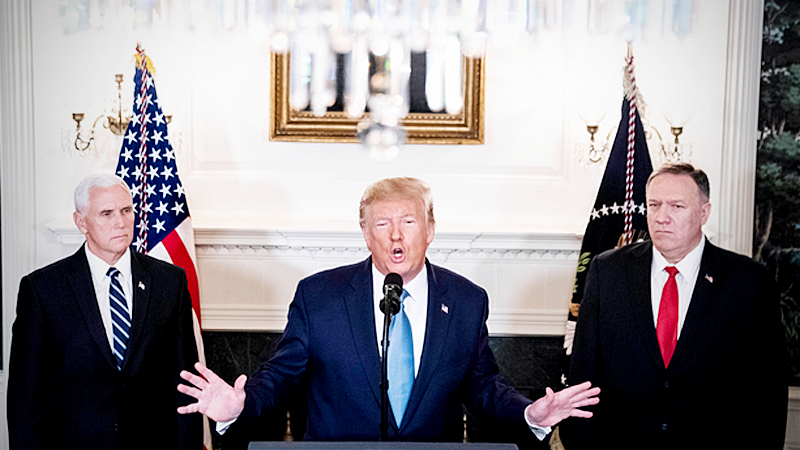 President Donald Trump is flanked by Vice President Mike Pence and Secretary of State Mike Pompeo at an announcement in October 2019. MUST CREDIT: Washington Post photo by Jabin Botsford

WASHINGTON - Secretary of State Mike Pompeo woke on Tuesday to a 4 a.m. call alerting him to a large protest outside the U.S. Embassy in Baghdad.

As demonstrators began hurling molotov cocktails at the heavily fortified compound, Pompeo grappled with the new security threat to his diplomats in phone calls starting at 4:30 a.m. with Defense Secretary Mark Esper, Chairman of the Joint Chiefs of Staff Gen. Mark Milley and Matthew Tueller, the U.S. ambassador to Iraq, according to U.S. officials.

Pompeo had lost a similar high-stakes deliberation last summer when Trump declined to retaliate militarily against Iran after it downed a U.S. surveillance drone, an outcome that left Pompeo "morose," according to one U.S. official. But recent changes to Trump's national security team and the whims of a president anxious about being viewed as hesitant in the face of Iranian aggression created an opening for Pompeo to press for the kind of action he had long been advocating.

The greenlighting of the airstrike near Baghdad International Airport represents a bureaucratic victory for Pompeo, but it also carries serious risks: another protracted regional war in the Middle East; retaliatory assassinations of U.S. personnel stationed around the world; an interruption in the battle against the Islamic State; the closure of diplomatic pathways to containing Iran's nuclear program; and a major backlash in Iraq, whose parliament voted on Sunday to expel all U.S. troops from the country.

For Pompeo, whose political ambitions are a source of constant speculation, the death of U.S. diplomats would be particularly damaging given his unyielding criticisms of former secretary of state Hillary Clinton after the killing of the U.S. ambassador to Libya and other American personnel in Benghazi in 2012.

But none of those considerations stopped Pompeo from pushing for the targeted strike, U.S. officials said, underscoring a fixation on Iran that spans 10 years of government service from Congress to the CIA to the State Department.

"We took a bad guy off the battlefield. We made the right decision," Pompeo told CNN. "I'm proud of the effort that President Trump undertook."

Pompeo first spoke with Trump about killing Soleimani months ago, said a senior U.S. official, but neither the president nor Pentagon officials were willing to countenance such an operation.

For more than a year, defense officials warned that the administration's campaign of economic sanctions against Iran had increased tensions with Tehran requiring a bigger and bigger share of military resources in the Middle East when many at the Pentagon wanted to redeploy their firepower to East Asia.

Trump, too, sought to draw down from the Middle East as he promised from the opening days of his presidential campaign. But that mind-set shifted on Dec. 27 when 30 rockets hit a joint U.S.-Iraqi base outside Kirkuk, killing an American civilian contractor and injuring service members.

On Dec. 29, Pompeo, Esper and Milley traveled to one of the president's private clubs in Florida, where the two military officials presented possible responses to Iranian aggression, including the option of killing Soleimani, senior U.S. officials said.

Trump's decision to target Soleimani came as a surprise and a shock to some officials briefed on his decision, given the Pentagon's long-standing concerns about escalation and the president's aversion to using military force against Iran.

One significant factor was the "lockstep" coordination for the operation between Pompeo and Esper, both graduates in the same class at the U.S. Military Academy, who deliberated ahead of the briefing with Trump, senior U.S. officials said. Pence also endorsed the decision, but he did not attend the meeting in Florida.

"Taking out Soleimani would not have happened under [former secretary of defense Jim] Mattis," said a White House official, who argued that Mattis's Pentagon was risk-averse. "Mattis was opposed to all of this. It's not a hit on Mattis, it's just his predisposition. Milley and Esper are different. Now you've got a cohesive national security team and you've got a secretary of state and defense secretary who've known each other their whole adult lives."

In the days since the strike, Pompeo has become the voice of the administration on the matter, speaking to allies and making the public case for the operation. Trump chose Pompeo to appear on all of the Sunday news shows because he "sticks to the line" and "never gives an inch," an administration official said.

But critics inside and outside the administration have questioned Pompeo's justification for the strike based on his claims that "dozens if not hundreds" of American lives were at risk.

Lawmakers left classified briefings with U.S. intelligence officials on Friday, saying they heard nothing to suggest that the threat posed by the proxy forces guided by Soleimani had changed substantially in recent months.

When repeatedly pressed on Sunday about the imminent nature of the threats, whether it was days or weeks away, or whether they had been foiled by the U.S. airstrike, Pompeo dismissed the questions.

"If you're an American in the region, days and weeks - this is not something that's relevant," Pompeo told CNN.

Some defense officials said Pompeo's claims of an imminent and direct threat were overstated, and they would prefer that he make the case based on the killing of the American contractor and previous Iranian provocations.

Critics have also questioned how an imminent attack would be foiled by killing Soleimani, who would not have carried out the strike himself.

"If the attack was going to take place when Soleimani was alive, it is difficult to comprehend why it wouldn't take place now that he is dead," said Robert Malley, the president of the International Crisis Group and a former Obama administration official.

After the strike, Pompeo held back-to-back phone calls with his counterparts around the globe but received a chilly reception from European allies, many of whom fear that the attack puts their embassies in Iran and Iraq in jeopardy and has now eliminated the chance to keep a lid on Iran's nuclear program.

"We have woken up to a more dangerous world," said France's Europe minister, Amelie de Montchalin.

Two European diplomats familiar with the calls said Pompeo expected European leaders to champion the U.S. strike publicly even though they were never consulted on the decision.

"The U.S. has not helped the Iran situation, and now they want everyone to cheerlead this," one diplomat said.

"Our position over the past few years has been about defending the JCPOA," said the diplomat, referring to the 2015 Iran nuclear deal.

On Sunday, Iran announced that it was suspending all limits of the nuclear deal, including on uranium enrichment, research and development, and enlarging its stockpile of nuclear fuel. Britain, France and Germany, as well as Russia and China, were original signatories of that deal with the United States and Iran, and they opposed Trump's decision to withdraw from the pact.

"No one trusts what Trump will do next, so it's hard to get behind this," said the European diplomat.

Pompeo responded to U.S. allies by saying "the Brits, the French, the Germans all need to understand that what we did - what the Americans did - saved lives in Europe as well," he told Fox News.

"Israel stands with the United States in its just struggle for peace, security and self-defense," he said.

Since his time as CIA director, Pompeo has forged a friendship with Yossi Cohen, the director of the Israeli intelligence service Mossad, said a person familiar with their meetings. The men have spoken about the threat posed by Iran to both Israel and the United States. In a prescient interview in October, Cohen said Soleimani "knows perfectly well that his elimination is not impossible."

Though Democrats have greeted the strike with skepticism, Republican leaders, who have long viewed Pompeo as a reassuring voice in the administration, uniformly praised the decision as the eradication of a terrorist who directed the killing of U.S. soldiers in Iraq after the 2003 U.S.-led invasion.

"Soleimani made it his life's work to take the Iranian revolutionary call for death to America and death to Israel and turn them into action," Senate Majority Leader Mitch McConnell, R-Ky., said.

A critical moment for Pompeo is nearing as he faces growing questions about a potential Senate run, though some GOP insiders say that decision seems to have stalled. Pompeo has kept in touch with Ward Baker, a political consultant who would probably lead the operation, and others in McConnell's orbit, about a bid. But Pompeo hasn't committed one way or the other, people familiar with the conversations said.

Some people close to the secretary say he has mixed feelings about becoming a relatively junior senator from Kansas after leading the State Department and CIA, but there is little doubt in Pompeo's home state that he could win.

At every step of his government career, Pompeo has tried to stake out a maximalist position on Iran that has made him popular among two critical pro-Israel constituencies in Republican politics: conservative Jewish donors and Christian evangelicals.

After Trump tapped Pompeo to lead the CIA, Pompeo quickly set up an Iran Mission Center at the agency to focus intelligence-gathering efforts and operations, elevating Iran's importance as an intelligence target.

At the State Department, he is a voracious consumer of diplomatic notes and reporting on Iran, and he places the country far above other geopolitical and economic hot spots in the world.

"If it's about Iran, he will read it," said one diplomat, referring to the massive flow of paper that crosses Pompeo's desk. "If it's not, good luck."