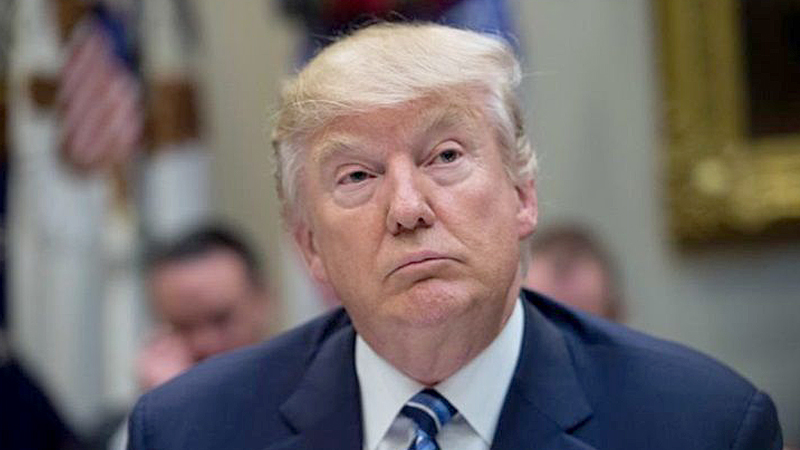 WEST PALM BEACH, Fla. - Amid deepening tensions in the Middle East, President Donald Trump's threat to order attacks against sites in Iran has prompted fresh concerns over the legality of doing so and left the administration facing questions about whether U.S. officials are considering such a move.

On Twitter late Saturday, Trump leveled a new warning against Iran, saying the United States is targeting 52 Iranian sites and that some of those are "a very high level & important to Iran & the Iranian culture."

"Those targets, and Iran itself, WILL BE HIT VERY FAST AND VERY HARD," Trump tweeted. "The USA wants no more threats!"

"ISIS targets cultural sites. The Taliban destroys cultural sites. The United States of America should not join this list," tweeted Michael McFaul, who served as the U.S. ambassador to Russia under the Obama administration. "Please @DeptofDefense @StateDept, roll back this horrific statement by @realDonaldTrump & make clear that we will not target Iranian cultural sites."

"Targeting civilians and cultural sites is what terrorists do. It's a war crime," tweeted Sen. Chris Murphy, D-Conn., a member of the Foreign Relations Committee. "Trump is stumbling into a war of choice. A war entirely of his making. A war that will get thousands of Americans killed. Congress must stop him."

Trump's threats and tough talk are emblematic of a president who has flouted the tenets of international and U.S. law on war crimes. He has insisted that enhanced interrogation tactics such as waterboarding work, suggested killing terrorist families to fight the Islamic State and two months ago cleared three members of the U.S. armed services accused or convicted of war crimes over objections from senior military officials.

One top official facing questions was Secretary of State Mike Pompeo, who appeared on Sunday shows to discuss the death of Maj. Gen. Qasem Soleimani, the commander of the Islamic Revolutionary Guard Corps' elite Quds Force, who was killed early Friday in Baghdad by a U.S. drone strike.

On CNN's "State of the Union," Pompeo did not directly respond when asked whether cultural centers in Iran would be considered fair targets.

"We're going to do the things that are right and the things that are consistent with American lives," said Pompeo, a graduate of the U.S. Military Academy. "If the Iranian leadership makes a bad decision, we hope that they won't. But when they do, America will respond."

In a separate interview on CBS's "Face the Nation," Pompeo said Trump's reference to the 52 potential target sites in Iran was "entirely consistent" with the administration's message of de-escalation.

"Iranian leadership needs to understand that attacking Americans is not cost-free," Pompeo said during that interview. "Setting out conditions that say these are our expectations, these are the things that America is expecting from you and if you don't do them, the cost will be clear and direct."

The 1954 Hague Convention for the Protection of Cultural Property bans the targeting of cultural sites with military action; there is a provision that allows for a waiver due to "military necessity." Iran has 24 locations on the U.N. list of cultural world heritage sites.

Former U.S. national security officials said the Pentagon would not target cultural property because it would violate domestic and international laws.

"It would be a war crime. DOD has very professional planners who take their obligations and fidelity to law seriously," said Kelly Magsamen, a former official at the National Security Council and the Pentagon who is now at the Center for American Progress, a liberal think tank. "Any military planner, any U.S. soldier would know that. The fact that the president of the United States doesn't know that is profoundly frightening to me. If he does know it and he's still saying it, that's even worse."

David Lapan, a longtime U.S. military official who also served as spokesman for the Department of Homeland Security in 2017, agreed that the U.S. military would not be considering such an attack.

"When you're talking about cultural sites, it can mean any number of things. But they're not military targets," said Lapan, now at the Bipartisan Policy Center in Washington.

Trump has endorsed lethal actions defined as war crimes by international and U.S. laws and widely condemned as crimes against humanity.

As a candidate and in his first months in office, Trump said enhanced interrogation methods, such as waterboarding, is an effective tactic to elicit information - practices at odds with the Geneva Conventions, the U.N. Convention Against Torture and the U.S. Detainee Treatment Act of 2005.

"I happen to feel that it does work," the president said in January 2017, referring to "torture or waterboarding or however you want to define it - enhanced interrogation I guess would be a word."

Trump also said during a December 2015 appearance on "Fox and Friends" that one way to win the fight against the Islamic State is to "take out their families."

More recently, Trump overruled military leaders and cleared three members of the armed forces who had been accused or convicted of war crimes. In November, Trump ordered full pardons to former Army 1st Lt. Clint Lorance, who was serving a 19-year sentence for the murder of two civilians, and Maj. Mathew Golsteyn, a former Special Forces officer who was facing murder charges for killing an Afghan detainee suspected of being a Taliban bombmaker.

The president also ordered the Navy to restore Chief Petty Officer Edward Gallagher to his previous rank. Gallagher had been acquitted of murder and convicted of posing with the corpse of an Islamic State fighter in Iraq.

The killing of Soleimani has also sparked a new debate within the Democratic presidential field about how to characterize the death of the Iranian military leader. Sens. Bernie Sanders, I-Vt., and Elizabeth Warren, D-Mass., have termed the killing as an "assassination" - a word that others in the race have avoided or even criticized more-liberal candidates for using.

"Donald Trump has ordered the killing of a government official of Iran, a high military leader in Iran, and in doing so has escalated an attack on Iran, and increased the likelihood that we will end up in another war in the Middle East," Warren said Saturday while campaigning in Manchester, Iowa.

Speaking Sunday on CNN, former South Bend, Indiana, mayor Pete Buttigieg said he was "not interested in the terminology, I'm interested in the consequences" when asked about the use of the word. But in North Carolina on Friday, former New York mayor Mike Bloomberg called the phrase "outrageous" as it related to Soleimani, noting that the Iranian leader was someone "who had an awful lot of blood on his hands."

Whether Soleimani's killing could be called an assassination is subject to debate, according to legal experts. A Reagan-era executive order prohibits the executive branch from carrying out an assassination, though that term itself is undefined in U.S. law, said Ashley Deeks, a law professor at the University of Virginia.

But the United States has long held that targeting someone who poses an imminent threat - as the Trump administration has described Soleimani - would be considered self-defense, not an assassination, she added. Much of it would depend on the intelligence undergirding the strike.

One might believe Soleimani's death was an assassination if he or she believed the United States was not in an armed conflict with Iran and that intelligence did not support the idea of an imminent attack, "then we should apply peacetime rules," Deeks said.