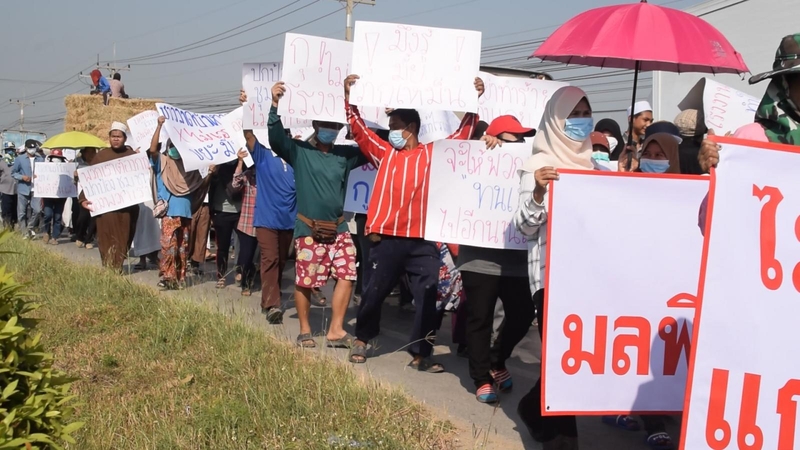 More than three hundred people in Ayutthaya’s Lat Bua Luang sub-district have assembled since Monday (January 6) at a factory giving off an unpleasant odour, requesting the facility to stop operations that are causing the acrid smell.

The Zea Fee Industry factory provides an industrial-waste disposal service. The odour, which is produced during the vulcanisation process, has reportedly been a problem for local people for approximately six to seven years.

People recently approached the Administrative Court, requesting an order for the factory to cease operation and “improve” the smell. The factory has itself appealed against the case, meanwhile continuing its operations.

The unresolved problem forced locals to gather at the factory’s entrance yesterday (January 6). They decided to stay put there, setting up tents and mobile toilets and bringing in provisions.

“If no negotiations take place, we will pressure relevant officials by blocking nearby roads,” one of the protesters warned.

Stop Global Warming Association president Srisuwan Janya visited Lat Bua Luang to see the situation for himself. He later said he too would file a case with the Supreme Administrative Court for an order instructing the factory to cease its operations.

One of the protesters said the odour causes burning in the throat and nose and is suffocating people who smell it.

“One villager’s father died from an allergy caused by the smell,” he even claimed. “I want the factory to stop its production or stop producing that odour from today,” he insisted.