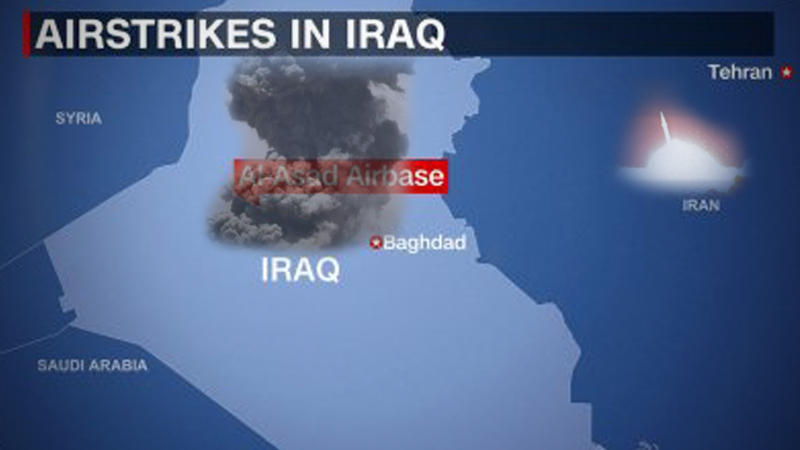 WASHINGTON - Iranian forces have launched more than a dozen ballistic missiles against two military bases in Iraq, the Pentagon said Tuesday evening, marking the most significant Iranian attack in the growing conflict between Iran and the United States.

Al Asad air base in western Iraq, which houses some American troops, was hit by at least six rockets about midnight Wednesday, according to a U.S. defense official familiar with the situation.

White House press secretary Stephanie Grisham said officials are aware of reports of attacks on U.S. facilities in Iraq, and added that President Donald Trump was "monitoring the situation closely."

The attack marks the most significant act of aggression in the growing conflict between the United States and Iran.

The strike comes as U.S. officials have defended Trump's decision to kill Maj. Gen. Qasem Soleimani, the commander of Iran's elite Quds Force, in an airstrike in Baghdad last week, Iranian leaders stepped up calls Tuesday for revenge against the United States.The calls for retaliation came as Iranian authorities prepared to bury Soleimani in his hometown of Kerman, a southeastern city. Early on Tuesday, authorities were forced to suspend the burial proceedings after a stampede killed dozens of mourners.

The attack was launched about 5:30 p.m. Washington time, the Pentagon said.

"It is clear these missiles were launched from Iran and targeted at least two Iraqi military bases hosting U.S. military and coalition personnel," the statement said. Al Asad air base in western Iraq and at least one facility in Erbil were targeted.

"As we evaluate the situation and our response, we will take all necessary measures to protect and defend U.S. personnel, partners, and allies in the region," the statement said. "Due to the dynamic nature of the situation, we will continue to provide updates as they become available."

"They're still in bunker mode," the official said.

The base, in Iraq's western Anbar province, houses some American troops. Trump on Sunday called it "extraordinarily expensive," threatening the Iraqi government with sanctions if the United States is told to withdraw all of its troops from Iraq and the government in Baghdad does not pay for it.

It was not immediately clear where on the base the rockets landed or if anyone was harmed. It would appear to mark one of the most aggressive attacks on U.S. forces in Iraq since the Iranian-backed militia Kataib Hezbollah launched 31 rockets at a base near Kirkuk on Dec. 27, killing a contractor and wounding several U.S. troops.