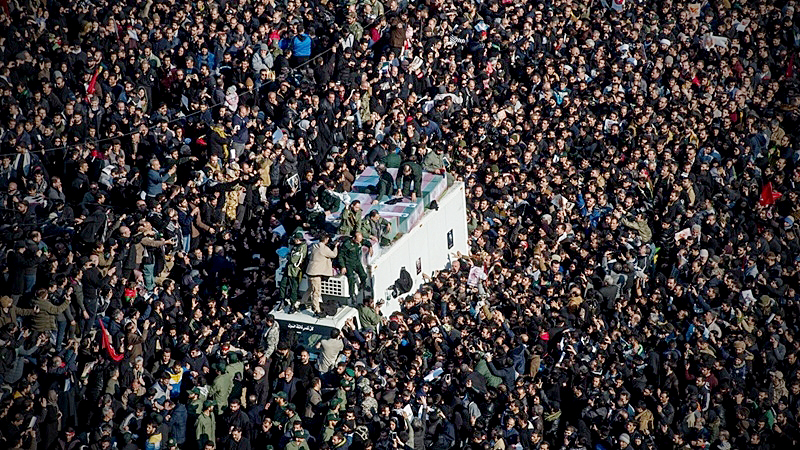 Mourners surround the coffins of Iranian General Qassem Soleimani and others killed in the U.S. airstrike during a funeral ceremony in Tehran on Jan. 6, 2020. MUST CREDIT: Bloomberg photo by Ali Mohammadi.

Iran apparently intended to avoid U.S. casualties when it launched more than a dozen missiles at U.S.-Iraqi airbases in retaliation for an American airstrike that killed a top Iranian general, according to U.S. officials with knowledge of the matter.

U.S. assessments of the strikes indicate Iran may have been aiming at unpopulated areas of the sprawling Al Asad airbase, because precision guided missiles struck sandy areas, said one of the officials, who spoke on condition of anonymity because the information wasn't yet publicly announced. The absence of U.S. casualties could mitigate the potential for a dramatic escalation.

The Islamic Revolutionary Guard Corps claimed responsibility for the barrage, which the Pentagon said was launched from Iran, and warned that additional operations were being prepared. At the same time, there were signs that both sides wanted to pull back from the brink of conflict, with Iran's foreign minister saying his country didn't wish to go to war, and Trump pronouncing that "All is well."

The Pentagon said the three bases that were struck had already been on high alert, and Iraq said it had received prior warning from Iran of an assault. No U.S. or Iraqi casualties were reported.

Stocks dropped and oil rose, though crude later pared gains on the reassuring signals. Major tanker companies, however, including Petrobas Brasileiro and the National Shipping Co. of Saudi Arabia, suspended sailing through the Straits of Hormuz, a major oil waterway, Dow Jones reported.

Some sort of response had been expected to the killing last week of Qassem Soleimani, who ran Iran's proxy operations across the Middle East and was killed in a drone strike near the airport in the Iraqi capital, Baghdad. While Tehran doesn't want outright war with the U.S., there was growing pressure at home to react. The balancing act was to do so without tipping things into a conflict that no one has appetite for.

Supreme Leader Ayatollah Ali Khamenei described the attacks on the bases as a "crushing response."

"Last night, they got a slap in the face," he said on state television. He again demanded that the U.S. presence in the region come to an end, a sign that Tehran's ultimate goal remains to push the U.S. military out of Iraq.

Foreign Minister Mohammad Javad Zarif sounded more conciliatory. The government "concluded proportionate measures in self-defense" after the Soleimani strike, he said on Twitter. "We do not seek escalation or war, but will defend ourselves against any aggression."

Iran has for years operated a carefully calibrated strategy of attacks, often via proxies, in the Middle East, that preserves its influence without drawing major retaliation. Crippled by economic sanctions, it can ill afford an outright war.

Iran "needed to do something quick," said Kamran Bokhari, founding director of the Center for Global Policy in Washington. "This is a placeholder move and a low-cost one."

One White House official, who spoke on condition of anonymity, said the early thinking was the missile strike was a perfunctory move that would let Iran retaliate without incurring a potentially devastating U.S. counter-assault. Trump is scheduled to make a statement later Wednesday.

Tensions between Iran and the U.S. have soared under Trump, who walked away from Iran's 2015 nuclear deal with world powers, approved by his predecessor. Since then, Iran has retreated from limitations on its nuclear program.

Iran's attack sent futures on the S&P 500 Index down as much as 1.7% before paring losses. Gold initially advanced to the highest since 2013, though those gains were trimmed along with an advance in oil, which at one point surged above $65 a barrel.

The Iraqi prime minister's office said it received verbal notice from Iran before the strike. It said 22 missiles entered Iraqi airspace early Wednesday, and 17 hit Ayn al-Asad, a key U.S. facility in the country that's been visited by both Trump and Vice President Mike Pence.

The tensions disrupted flights, with U.S. aviation regulators issuing new restrictions barring civilian traffic over Iraq, Iran, the Persian Gulf and the Gulf of Oman. Adding to the turmoil, a Boeing 737 passenger jet bound for Ukraine crashed shortly after takeoff in Iran, killing all 176 people on board, with Iran's media reporting it was due to a technical problem.

World leaders urged restraint, and Turkey indicated it's willing to mediate between the U.S. and Iran. Ankara has cordial relations with eastern neighbor Iran, and enjoys warm ties with Trump, despite severe strains with Congress over a Russian missile purchase.

Trump has shown restraint in previous attacks in the region blamed on Iran that didn't kill any U.S. citizens. But Iran's quick claim of responsibility and the targeting of U.S. military outposts make some sort of retaliation more likely.

"The next question is, does the U.S. react or overreact to this," said Jarrett Blanc, a senior fellow at the Carnegie Endowment for International Peace and a former State Department coordinator for Iran nuclear implementation.

Iran is believed to have the region's largest stockpile of short-range ballistic missiles, and a large number of American military and diplomatic facilities in the region were seen as potential targets for reprisals. Another option is Iranian proxies.

"As we evaluate the situation and our response, we will take all necessary measures to protect and defend U.S. personnel, partners, and allies in the region," according to a Pentagon statement.

The U.S. had vowed a quick and overwhelming response to any Iranian attacks and over the past week deployed about 3,500 soldiers from the 82nd Airborne to Kuwait and three Navy ships with about 2,200 Marines to the Persian Gulf region.

Tensions between the U.S. and Iran soared following a Dec. 27 rocket assault on an Iraqi base that killed an American contractor. The U.S. blamed Kataib Hezbollah, an Iraqi militia closely associated with Iran.

On Dec. 29, U.S. aircraft struck five bases in Iraq and Syria used by Kataib Hezbollah. Two days later, dozens of Iraqi militiamen and their supporters stormed the U.S. embassy complex in Baghdad. The U.S. responded with the drone strike on Soleimani.