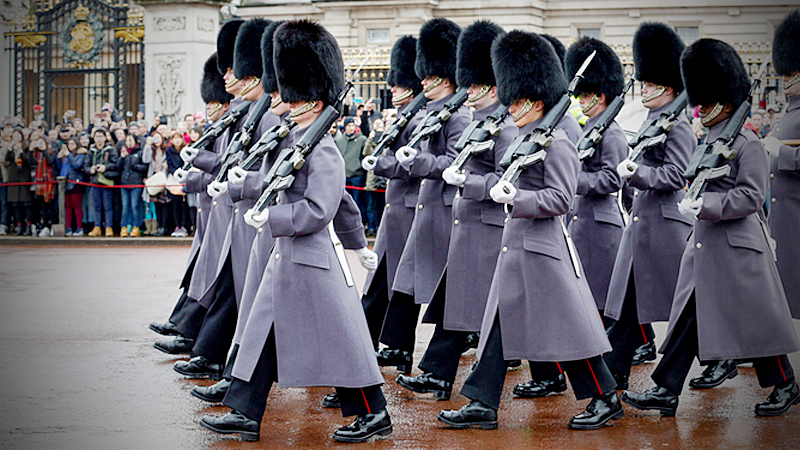 Coldstream Guards march after the Changing the Guard ceremony at Buckingham Palace in London on March 3, 2017. MUST CREDIT: Bloomberg photo by Luke MacGregor.

Prince Harry and Meghan Markle are cutting financial ties to Buckingham Palace, part of the couple's surprise decision to "step back" as senior royals.

Their new website -- sussexroyal.com -- details the "working model" for the duke and duchess, noting their royal duties will no longer be partly funded by the queen. That means they'll be freed from restrictions against earning income.

"They value the ability to earn a professional income, which in the current structure they are prohibited from doing," the website explains. "For this reason they have made the choice to become members of the Royal Family with financial independence."

Before their marriage, the Duchess of Sussex, 38, was a television actor in the U.S. while Prince Harry, 35, had served in the British Armed Forces. Their earning power could be significant, with the pair expected to secure six-figure speaking fees.

But creating such a structure may prove tricky. Royal finances have long been contentious and an announcement Wednesday from Buckingham Palace suggests details haven't been finalized.

"Discussions with the Duke and Duchess of Sussex are at an early stage," according to the statement. "We understand their desire to take a different approach, but these are complicated issues that will take time to work through."

Since 2012, the queen's official duties have been partly funded through a system known as the Sovereign Grant. That provides the monarch with a quarter of the profits from the Crown Estate, which owns London property, the U.K. seabed as well as forests, wind farms and the Windsor Estate. The Crown Estate had net assets of more than 14 billion pounds ($18.3 billion) at end of the fiscal year on March 31. The money is used to cover palace upkeep, payroll and other costs of the Royal Family.

Even if the pair sever those ties, their office will hardly be financially independent from the wider monarchy.

Just 5% of the costs of the official duties of the Sussex household is supported by payments from the Sovereign Grant. The rest is covered by the Duchy of Cornwall, a private estate that funds the private and official expenditures of the Prince of Wales, Harry's father. The Duchy had net assets of 933 million pounds at the end of the last fiscal year, in which it generated income of 21 million pounds, according to an annual report.

The couple are already independently wealthy, with Prince Harry's personal wealth estimated at 30 million pounds, thanks to his share of his mother's estate and his great-grandmother's legacy, the Times of London reported.

Despite any new income, the additional wealth the couple accumulate probably will remain a fraction of the queen's personal fortune of about $400 million, according to an analysis by the Bloomberg Billionaires Index. That was largely inherited from her family and includes one of the world's most valuable stamp collections.

While that's dwarfed by the $20 billion fortune of Jim Ratcliffe, Britain's richest person, the Royal Family remains one of the nation's most valuable institutions with a net worth of 68 billion pounds, according to a 2017 report by Brand Finance, a brand valuation and strategy consulting firm. The figure includes contributions to the economy through tourism and miscellany such as the effect of royal babies on fashion brands.