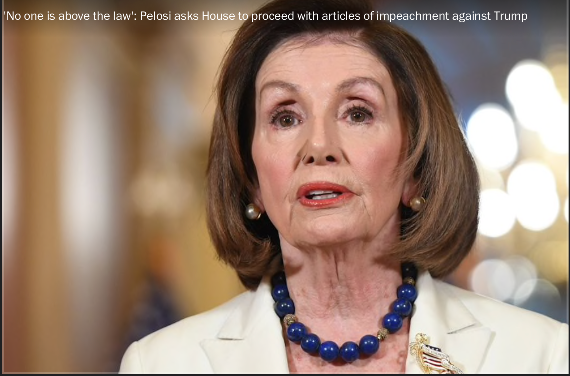 WASHINGTON - House Speaker Nancy Pelosi announced Friday that the House next week will consider a resolution to appoint impeachment managers and transmit articles of impeachment to the Senate, setting the stage for a historic trial of President Donald Trump.

Her announcement, in a letter to Democratic colleagues, came shortly after the House ended its work week without taking a vote on the matter.

"I have asked Judiciary Committee Chairman Jerry Nadler to be prepared to bring to the Floor next week a resolution to appoint managers and transmit articles of impeachment to the Senate," Pelosi, D-Calif., said in the letter.

A day earlier, Pelosi continued to insist that Senate Majority Leader Mitch McConnell, R-Ky., should release a resolution laying out rules of a trial before the articles were transmitted.

The House voted on Dec. 18 to impeach Trump on two charges - abuse of power and obstruction of Congress.

The crux of the Democrats' case is the allegation that Trump tried to leverage a White House meeting and military aid, sought by Ukraine to combat Russian military aggression, to pressure Ukrainian President Volodymyr Zelensky to launch an investigation of former vice president Joe Biden and his son Hunter Biden, as well as a probe of an unfounded theory that Kyiv conspired with Democrats to interfere in the 2016 presidential election.

Pelosi said in her letter that she would consult with colleagues on how to proceed during a House Democratic caucus meeting on Tuesday. But she not indicate which day the vote might occur.

Pelosi has held the articles for more than three weeks as Democrats sought guarantees about the scope of a Senate trial, including witnesses.

McConnell has rebuffed Democratic requests to guarantee certain witnesses will appear at an impeachment trial. Instead, he has said senators should vote on whether to hear from witnesses after hearing opening statements from House impeachment managers and lawyers for Trump and having an opportunity to submit questions to both sides.

House Intelligence Committee Chairman Adam Schiff, D-Calif., on Friday shared a video clip from two decades ago in which McConnell talked about the importance of witnesses in President Bill Clinton's impeachment trial.

"A Senate trial should be like any other trial," Schiff said in a tweet in which he shared the clip. "Senators should hear from witnesses. Senators should see the documents. Only then can they make the best possible decision regarding the President's misconduct. Once upon a time, Mitch McConnell felt the same."

The clip is from a McConnell appearance on "Larry King Live" on CNN.

"Last I heard, when you have a trial, you get witnesses, right?" Sanders, a Democratic presidential candidate, said during an appearance on NBC's "Today" show. "It is astounding to me that we have Mitch McConnell, the Republican leader, trying to prevent witnesses, some of whom want to testify, from being present in the trial."

Meanwhile, Trump mocked Pelosi on Friday for allegedly getting the idea to delay sending the articles of impeachment to the Senate from a tactic that John Dean, counsel to President Richard Nixon during Watergate, suggested on CNN.

The anecdote, which appeared in a Time magazine profile of Pelosi, was attributed to an aide who suggested that Dean sparked the idea of holding onto the articles as a way to force McConnell's hand.

Trump, a regular viewer of cable news who often repeats what he hears on Fox News, responded to a tweet about it from conservative commentator Mollie Hemingway.

Trump shared that tweet and added of Pelosi: "She will go down as perhaps the least successful Speaker in U.S. History!"