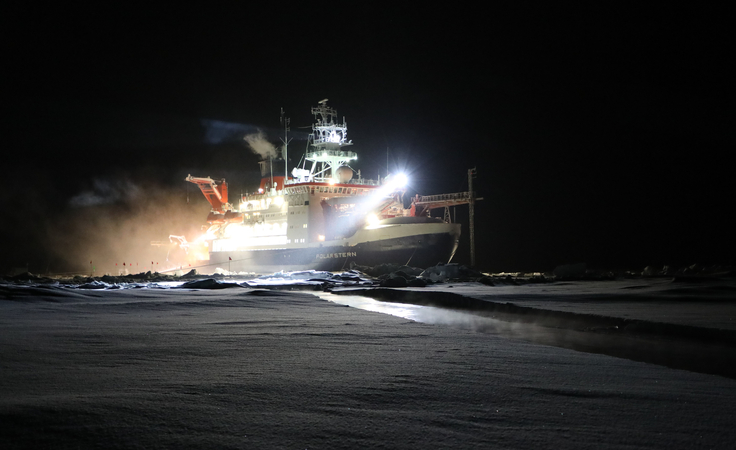 A crack opened up in the ice alongside the research vessel Polarstern. Researchers on the MOSAiC mission are struggling to cope with more fragile and easily fractured ice, a consequence of climate change. MUST CREDIT: Matthew Shupe/Colorado-Boulder/NOAA/CIRES

Not long after the Arctic sun set for the final time last year, a ferocious storm descended on the isolated, icebound crew of the research vessel Polarstern. 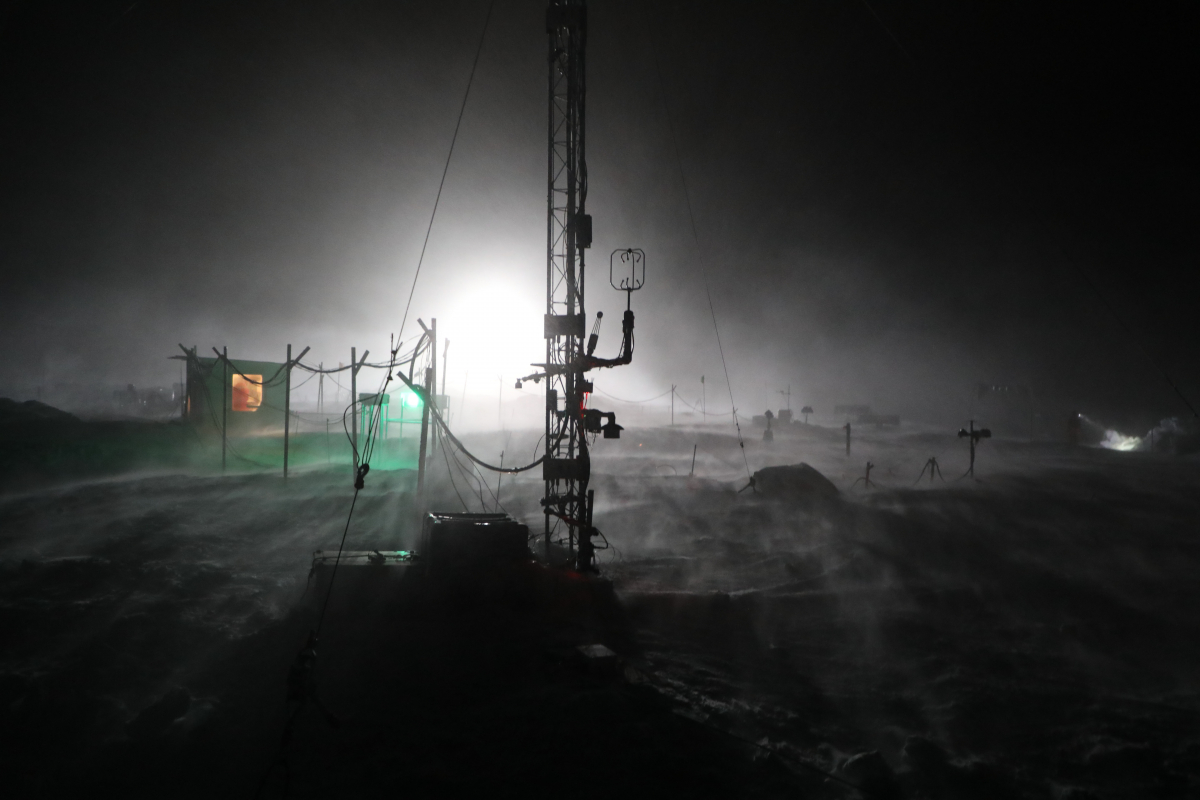 The polar night filled with the gunshot cracks of fracturing ice and the howls of 60-mph winds. The ship heaved, power cables snapped and a 100-foot meteorology tower toppled. A tremendous fissure opened in the floe to which the Polarstern was fixed, exposing the ocean waves. Researchers scrambled onto the ice to retrieve and restore their instruments.

Hundreds of miles from the nearest source of help, the scientists were both unnerved and utterly exhilarated. This was exactly the sort of drama they were seeking when they set out to document climate change at the top of the world.

The Multidisciplinary drifting Observatory for the Study of Arctic Climate (MOSAiC), which began in late September, is the biggest Arctic research expedition in history. A rotating cast of more than 300 researchers will spend a year stuck in the sea ice aboard the Polarstern, moving only at the speed of the ice's natural drift. Their goal is to understand the complex and rapidly changing Arctic system before it collapses. What they discover could help forecast the future of the entire globe.

Participants in the first leg of the voyage recently returned to land , bringing backstories of bears, brittle ice and a polar landscape that was even more unstable than anticipated. In some of their first interviews since leaving the ship, they said they were stunned and occasionally stymied by the very melting they hope to understand.

"The Arctic is the epicenter of global warming," said Markus Rex, an atmospheric scientist at Germany's Alfred Wegener Institute and leader of the 17-nation, $134 million expedition. "We have had to constantly adapt to the changing ice environment, and we will continue to do so. But it is hard to predict what is going to happen next."

For millennia, the constant cap of ice that covers the North Pole has provided vital protection for the planet. Sea ice reflects at least two-thirds of light back into the atmosphere, whereas open ocean absorbs almost all of the sun's heat.

But the sea ice is shrinking. The amount of ice in summertime - when its reflective powers are most vital - is about 3 million square miles smaller than it was in 1980. At the current rate of decline, year-round ice could vanish in a couple of decades, destabilizing global weather patterns and accelerating the pace of warming.

As they intentionally drift with the ice pack across the North Pole, MOSAiC researchers are racing against that rapid change to better understand the workings of the frozen Arctic - before it is gone.

"We are teetering on the edge of feasibility," said Matthew Shupe, an atmospheric scientist at the Cooperative Institute for Research in Environmental Sciences and co-coordinator for the MOSAiC expedition.

Shupe, who two weeks ago returned to land - and cellphone reception - after a 2.5-month stint aboard the Polarstern, said the start of the expedition was characterized by constant struggle with fragile and easily fractured sea ice. New cracks and fissures form in the ice daily, throwing the carefully-coordinated camp into disarray.

These conditions are manageable - for now. But in the Arctic of the near future, when ice is even scarcer, "this kind of project . . . setting up a ice camp for a whole year, is not going to be possible," Shupe said.

MOSAiC began after a summer of record-breaking heat in the Arctic; about 800,000 square miles more open water was exposed in the middle of September than is typical for that time of year. Even Shupe, a veteran of polar expeditions, said he was surprised by the scarcity of older, thicker ice. The crew of the Polarstern struggled for weeks to find a floe to support their drift expedition, which depends on wedging the ship into ice that will last long enough to carry it across the North Pole.

Finally, on a frozen mass riddled with dark melt pools, satellite images revealed a patch of thick white ice. The MOSAiC team named this stable area "the Fortress" and began to establish camp.

The square-mile floe "is not perfect," said Rex, who spoke to The Washington Post in December over a feeble phone connection from the bridge of the Polarstern. "It is thin and keeps breaking, like all the other floes here in the new Arctic."

One day in October, while working to set up a meteorology tower near the ship, Shupe and his colleagues heard a "grumble" from below. The scientists looked at each other, then at the ice, where a narrow, dark crack was racing toward the horizon. A shiver of awed recognition went through the group, as they felt the environment change beneath their feet.

"It is so cool to be embedded right in the middle of this new Arctic state," Shupe said. "That's exactly why we want to be here."

But the moving ice pulls on power cables and crushes sensors. Shoveled pathways to various research stations are frequently rerouted to circumvent weak spots in the floe. Once, researchers had to kayak across a 150-foot-wide expanse of open water when a crack separated them from their instruments.

Detailed observations with a fleet of high-tech instruments have revealed subtler changes to the ice. Though heat energy typically moves from the relatively warm ocean to the frigid air during the winter months, instruments showed energy going in both directions.

"We don't know yet what it means," Shupe said. "And boy, I have no idea what's going to happen next."

The unpredictability of the system makes it difficult to predict the fate of MOSAiC as it drifts with the ice pack across the North Pole.

Melinda Webster, a sea ice geophysicist at the University of Alaska, will be heading to the Polarstern in June, when pools of turquoise meltwater make Swiss cheese out of the disintegrating ice.

"By the time I leave the Polarstern in mid-August," she said, "there is a possibility that the ice at the MOSAiC site could be completely melted."

The instability of the ice compounds the hazards that have always been a part of Arctic expeditions. There are polar bears that must be warded off by armed guards who patrol the camp's perimeter. Curious bears can also imperil experiments; Shupe suspects one was responsible for yanking and chewing on the cables of an atmospheric flux station, damaging the instruments.

Then there is the cold, bitter and unrelenting. With the onset of the six-month polar night, temperatures are well below zero degrees, and wind chill can make it feel like minus-50. Scientists' exhalations condense in their face masks, then freeze, forming ice crystals that irritate the skin. Frostbite is a constant threat.

But the splendid desolation of the polar landscape compensates for its challenges, Shupe said. Just two days after he had returned home to Colorado, he found himself reliving "magical moments" from the voyage: the way swirls of blowing snow were illuminated by the ship's floodlights; clambering over car-sized blocks of ice so compressed they gleamed blue; and the sheets of ice that sloshed atop the surging waves in an almost psychedelic display.

"I tried to capture these moments, to memorize them," he said. "These are experiences you can only find in the Arctic."

It is not clear how much longer they will last.