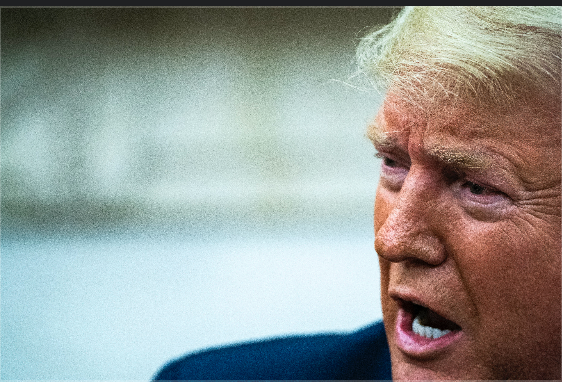 WASHINGTON - President Donald Trump said on Friday that a senior Iranian general killed by a U.S. drone strike had been planning attacks on four U.S. embassies, a claim made to justify the decision but that was at odds with intelligence assessments from senior officials in Trump's administration.

Trump and his top advisers have been under intensifying pressure from lawmakers in both parties to share more details about the intelligence they say showed Qasem Soleimani, the head of Iran's elite Quds Force, was planning imminent attacks against U.S. personnel in the Middle East. On Trump's orders, Soleimani was killed last week in a drone strike, prompting Iran to fire a volley of ballistic missiles this week at bases in Iraq housing U.S. soldiers.

In an interview with Fox News' Laura Ingraham, excerpts of which were released Friday afternoon, Trump expanded on comments from a day earlier, when he initially told reporters that Soleimani's forces "were looking to blow up our embassy" in Baghdad. He later said at a rally in Toledo, Ohio, that "Soleimani was actively planning new attacks, and he was looking very seriously at our embassies, and not just the embassy in Baghdad."

"Did [Soleimani] have large-scale attacks planned for other embassies?" Ingraham asked. "And if those were planned, why can't we reveal that to the American people? Wouldn't that help your case?"

"I can reveal that I believe it probably would've been four embassies," Trump said.

But a senior administration official and a senior defense official, speaking on the condition of anonymity to discuss classified information, said they were only aware of vague intelligence about a plot against the embassy in Baghdad and that the information did not suggest a fully formed plot. Neither official said there were threats against multiple embassies.

The senior defense official did not directly contradict Trump but said there was concern that there might be an attempt to place a bomb at the Baghdad embassy, a heavily fortified structure in a secure area of the Iraqi capital.

The senior administration official said that Trump has been fixated on not allowing an attack on a U.S. diplomatic facility, out of fear of being compared unfavorably to his predecessor.

Trump is "totally obsessed with not letting something like Benghazi happen to him," the official said, referring to the 2012 attack on a U.S. facility in Libya that has achieved totemic status among Trump allies, who see it as evidence of former president Barack Obama's alleged weakness in the face of terrorism.

The embassy in Baghdad did not receive an alert commensurate to the threat Trump described, said a person familiar with the situation, who was not authorized to comment publicly. When the U.S. government has specific information about threats to embassies, warnings or alerts are often sent to embassy personnel to be vigilant.

The State Department did not respond to questions about whether alerts were conveyed to the four embassies Trump claimed were in danger.

Trump's comments are likely to fuel calls for his administration to release more classified intelligence to lawmakers, who have fumed that the administration has withheld basic information about the president's rationale for military action against one of Iran's most senior leaders. Administration officials have offered shifting explanations for what prompted the decision to target Soleimani, at times describing the threat he posed as "imminent," while also suggesting the timeline could have been days or weeks.

Some lawmakers who received a classified briefing on Wednesday said they heard nothing about a threat to U.S. embassies from Soleimani.

"I feel like I would have remembered if they would have presented that kind of intel at the briefing," Sen. Chris Murphy, D-Conn., said in an interview Friday. "It sounds to me like the administration is panicking a little bit about the soundness of their rationale and deciding to share information with Fox News that they aren't willing to share with Congress."

Murphy said the briefers - who included Secretary of State Mike Pompeo, Defense Secretary Mark Esper, CIA Director Gina Haspel, and Chairman of the Joint Chiefs Gen. Mark Milley - mentioned the Baghdad embassy only in the context of protests that occurred there in late December following a U.S. strike on a militia group that had killed a U.S. citizen in a rocket attack.

"Had they presented threats about four embassies, there would have been a very different disposition from senators coming out of that briefing," Murphy said.

Speaking of the president, he added: "I don't trust what he said."

Sen. Mike Lee, R-Utah, had earlier blasted the officials for what he described as a deficient presentation that was more concerned with talking points than evidence.

"What I found so distressing about the briefing is one of the messages we received from the briefers was, 'Do not debate, do not discuss the issue of the appropriateness of further military intervention against Iran,' and that if you do, 'You will be emboldening Iran,' " Lee told reporters on Thursday.

At the White House on Friday, Pompeo was pressed about the intelligence and affirmed Trump's claim at the rally that embassies were in danger.

"We had specific information on an imminent threat, and those threats included attacks on U.S. embassies period full stop," Pompeo told reporters at a briefing on new sanctions being levied on Iran for its missile attack.

Spokespeople for the CIA and the Office of the Director of National Intelligence declined to comment.

Pompeo was also questioned about whether he had undercut the administration's own arguments when he said on Thursday that although the Iranian attack was imminent, he did not know where or when it would happen.

"We told them about the imminent threat," he said. "All of the intelligence that we've briefed, that you've heard today, I assure you, in an unclassified setting, we provide in the classified setting as well."

That ran counter to statements from several Democratic senators who attended the Wednesday briefing, who said they were not given that information from administration officials.

Sen. Christopher Coons, D-Del., speaking on CNN, said the administration did not offer any hard evidence to senators that Soleimani had been targeting the U.S. Embassy in Baghdad. Sen. Tom Udall, D-N.M., made similar comments during an MSNBC interview.

"We did not hear about blowing up the embassy yesterday in that briefing, and I sat through it from beginning to end," Sen. Edward Markey, D-Mass., said on MSNBC. "And, so, if that was the threat, if it was imminent, if it was going to happen within a couple of days, they had every opportunity for 75 minutes to let us know that. And that would have cast all of this in a different light because we had so many diplomatic and military personnel who would have been in danger."

Murphy said that the administration officials were repeatedly asked about the nature of the intelligence but declined to offer more specifics.

"I came out of that briefing with the belief that they were just going to kill Soleimani as sending a message to the Iranians. They suggested they had authority to do that without an imminent threat," Murphy said. "They were getting very specific questions about an imminent threat, and they weren't able to answer the questions."