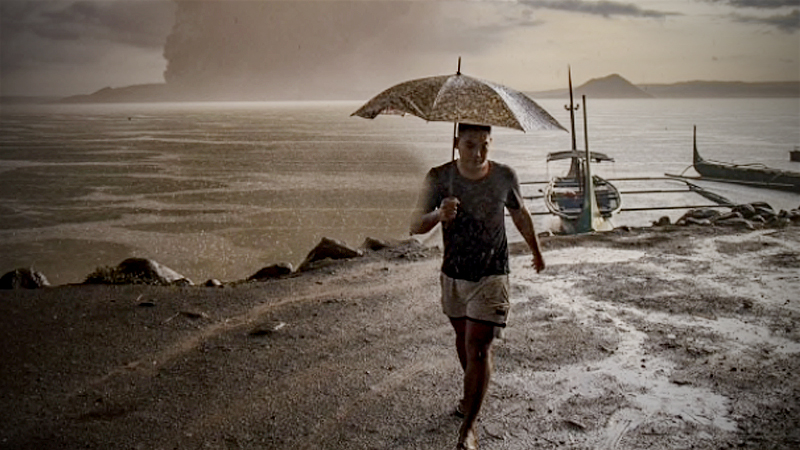 Taal volcano eruption forces thousands to seek safer ground in the Philippines. MANILA, Philippines - An erupting volcano spewed lava into the air and spread ash across the Philippines on Monday, as desperate residents packed up their belongings and waited for help, while others fled so quickly they left behind their sandals.

In one town, officials had to abandon evacuation centers and rework their plans after its location was deemed too risky.

Thousands have sought safer ground as the Taal volcano erupts for the first time since 1977, blowing clouds of ash as far away as Manila, 60 miles to the north. Officials have warned that the volcano, which sits on an island in a lake and is among the Philippines' most active, could reach a hazardous "Level 5" incident - involving an ongoing magma eruption - within hours or days.

The volcano's ructions intensified on Sunday, prompting the provincial government in Batangas to declare a state of calamity. There have been no confirmed reports of casualties so far.

Manila's airport resumed partial operations on Monday after being closed for about a day, affecting hundreds of flights. President Rodrigo Duterte had been delayed in returning to Manila from his hometown of Davao, but was able to make the trip Monday, his spokesman told the AP.

Face masks were in short supply across the capital. Government offices and schools closed early, and some suspended Tuesday classes as well, Reuters reported.

In the lakeside town of Taal, where a mandatory evacuation order is in force, Mayor Pong Mercado said Monday his government had to abandon 11 evacuation centers and move to a larger city as it was too close to the volcano. Under a gray sky and with frequent tremors jolting the ground, many residents gathered their belongings and waited to be rescued.

"The traffic [is at] a turtle's pace because of the ashfall. It's thick, almost zero visibility," said Mercado. "It's okay for now because it's daytime - it will be harder to see at night."

Evacuees without cars were making their way out by foot on muddy roads, their children and pets in tow. Some also ushered out their livestock, while farmers lamented to the local press that the loss of their animals would affect their livelihood.

At a school-turned-shelter in the town of Bauan, church volunteer Gia Pauline Fabie, 24, estimated that more than 60 evacuees had arrived, some from Taal. She said there were a lot of children - one of whom she noticed had lost a flip-flop during the rush of evacuation.

"When they arrived, the first thing they asked for were toiletries because they wanted to take a bath," said Fabie.

Church workers were scouring the town and collecting people without anywhere else to stay the night.

Taal is among more than 20 active volcanoes in the Philippines, which sits on the Pacific Ring of Fire. According to the NASA Earth Observatory, Taal consists of multiple stratovolcanoes. Its primary feature is the three-mile-wide Volcano Island, which has 47 craters and is surrounded by water.

The Philippine Institute of Volcanology and Seismology said magma eruptions occurred in the volcano early Monday, characterized by a lava fountain, lightning and thunder. The volcano produced at least 75 earthquakes.

The eruption interrupted wedding celebrations in Tagaytay City, a hilltop tourist destination that overlooks the lake, making it a popular spot for couples to tie the knot.

John Dan Ramos, 25, was attending his cousin's wedding on Sunday when the guests noticed the column of ash rising in the distance. By the time the wedding ended, about 200 guests found themselves stranded for the night, worried that the ashfall would make it perilous to leave. They ate leftovers and picked their own spots to rest.

"I slept under a table. It was to each his own," said Ramos.

On Monday, with earthquakes increasing, they knew they had to flee. Ramos and his cousins managed to get out by car, navigating steep and slippery roads, he said.

At the lakeside town of Talisay, roughly 15 minutes by boat from the island where the volcano lies, Mariel Ann Gabales, 30, managed to leave late Sunday local time. She and about 10 others, including her grandparents and cousins, got into a van sent by relatives. Clutching packed clothes and their three dogs, they arrived in Lipa City past midnight after a three-hour journey.

Electricity was out, and it was raining. Gabales said they drove slowly through the dark along slippery roads, but noted the sense of community as people tried to help each other.

"The windshields were covered [with ash] - and a lot of strangers would pour and spray water on them to help," she said.

But she heard from friends in the area that many residents had stayed behind, worried about their houses.

"You know how some old [people] can be. Sometimes their houses are more important than their lives," she said. "I hope they get rescued right away."