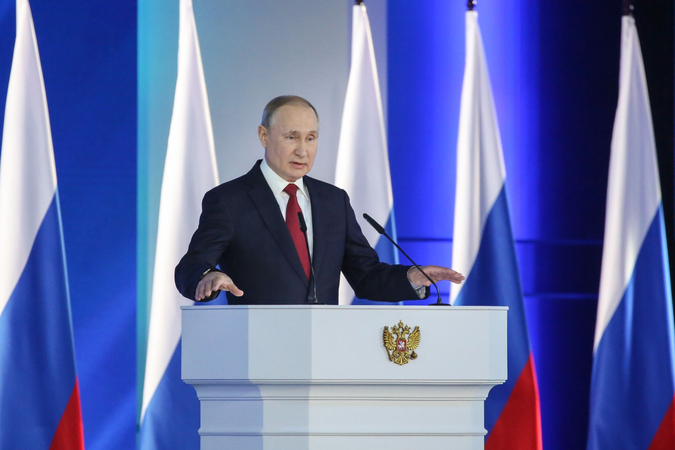 Vladimir Putin, Russia's president, gestures as he speaks during his annual state of the nation address in Moscow, on Jan. 15, 2020. MUST CREDIT: Bloomberg photo by Andrey Rudakov.

Russian Prime Minister Dmitry Medvedev resigned and said President Vladimir Putin will choose a new government hours after the Kremlin leader called for a series of constitutional changes in his annual address.

Medvedev, who became premier in 2012 after stepping down as president to make way for Putin's return to the Kremlin, will take up a new post as deputy chairman of the security council, the Kremlin said. He answers to Putin, who chairs the body as president.

The surprise announcement came just hours after Putin made his annual state-of-the-nation address, pledging as he has in past years to boost living standards and economic growth. Russia has struggled to improve performance on those in recent years amid low oil prices and western sanctions. Medvedev's government has long been criticized for inefficiency and his popularity ratings lag those of the president.

The two men appeared on state television in a choreographed announcement to tell ministers of Medvedev's departure and the resignation of the government. The reforms set out by Putin will mean "fundamental changes" to the constitution, Medvedev said.

"In these circumstances, I think it would be right for the government to resign," Medvedev said. Putin, 67, said the government hasn't fulfilled all of its tasks, though he thanked it for its work.

Medvedev, 54, served four years as president from 2008 when Putin left the Kremlin to comply with constitutional term limits. Seen initially as a standard-bearer for liberal reforms, he surrendered the presidency back to Putin at the end of his first term after they disclosed at a September 2011 congress of the ruling United Russia party that the job-swap had been agreed on years earlier.

He's been among Putin's closest political allies since they worked together in St. Petersburg city council in the early 1990s after the Soviet Union's collapse.