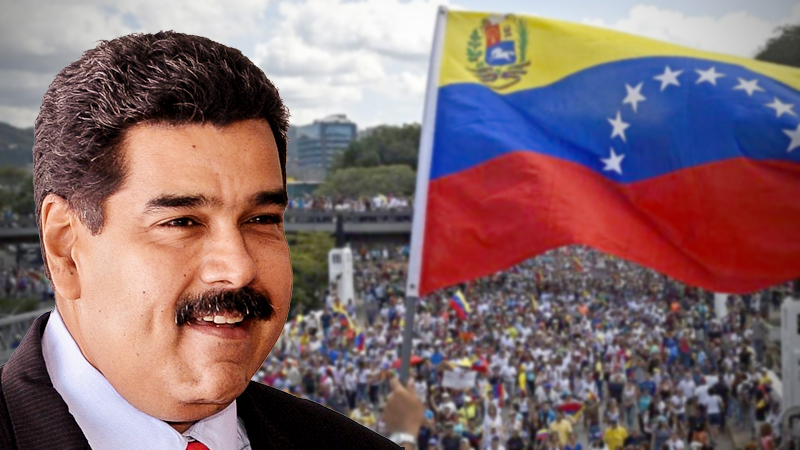 CARACAS, Venezuela - The tug of war over Venezuela's National Assembly intensified Wednesday as pro-government thugs attacked lawmakers allied with opposition leader Juan Guaidó, preventing them from holding a session in the legislative palace.

The socialist government of President Nicolás Maduro has been trying to take over the legislature, the last democratic institution in this increasingly authoritarian, economically moribund nation.

Last week, security forces blocked opposition lawmakers from entering the building for a session to elect legislative leaders. Pro-government lawmakers installed a Maduro ally as leader of the assembly, but Guaidó's majority reconvened in a nearby newspaper office and elected him to a new one-year term. Maduro's move was condemned internationally.

On Wednesday, it was clear the fight wasn't over.

A video shared by Guaidó's spokesman showed men on foot and on motorbikes pursuing a vehicle carrying four opposition lawmakers, hurling stones and battering the car with a traffic cone and pipe. One man smashed the rear window, prompting the car's driver to speed away. No injuries were reported.

Delsa Solórzano, one of the deputies in the car, tweeted that the pro-government gangs known as "colectivos" shot at them as they tried to reach the legislative palace in Caracas. Guaidó later said the vehicle had a bullet hole in the driver's side window.

"They didn't try to stop us. They tried to lynch us," lawmaker Carlos Berrizbeitia said. Journalists trying to report on the attacks were pulled off their motorcycles by armed civilians, who stole their equipment.

The parliamentary session was moved to a theater in a suburb of Caracas called El Hatillo.

The National Assembly is the only government institution controlled by the opposition in this South American nation of 32 million. Its members have declared Maduro a usurper and named Guaidó the country's rightful leader - a claim supported by the United States and more than 50 other countries.

Luis Vicente León, a political analyst and director of the Datanálisis polling agency, said it was clear the government was not going to allow the opposition lawmakers to hold sessions in the legislature.

"What they want is for them to have a parallel operation outside the palace because that takes away their legitimacy," he said.

Maduro, the hand-chosen successor to longtime leader Hugo Chávez upon the socialist's death in 2013, wields extensive control over Venezuela's economy, judiciary and military. But the opposition won a majority in the National Assembly in 2015. Maduro responded by creating his own super-congress, the National Constituent Assembly, two years later, and claiming reelection in a 2018 vote riddled with irregularities.

But the National Assembly remains important. It confers legitimacy on Guaidó and gives the opposition access to millions of dollars in Venezuelan assets abroad. It can refuse to endorse oil and gas contracts in the OPEC nation, creating legal headaches for Russia and other allies of Maduro who want such deals to be enforceable after Maduro is gone.

The assembly was scheduled to meet Tuesday, which would have coincided with a session of the National Constituent Assembly. To avoid a conflict, Guaidó pushed the meeting back a day. But by early Wednesday, security forces and colectivos had surrounded the building, making it clear it would be difficult to convene.

David Smilde, a Venezuela analyst at Tulane University, says the Maduro government has benefited from the confusion surrounding the multiple legislatures. Being blocked from entering the assembly could prompt opposition lawmakers to boycott legislative elections expected this year on the grounds that they'd be unfair.

"That's a very good result for the government," Smilde said. "It means they control the playing field, and within a year they'll be able to claim this space."

Guaidó, who emerged from obscurity a year ago to lead the opposition to Maduro, has struggled through a succession of setbacks to maintain momentum. An effort to push humanitarian aid into the country in February fell flat. His call on the military to rise up against the government in April failed. Negotiations with the government brokered by Norway during the summer went nowhere.

In a brief address to journalists Wednesday, Guaidó accused Maduro's government of using the military and paramilitaries to take over the legislative palace.

"We will not continue to tolerate the dictatorship's attacks," he said.

There was no immediate response from the government. On Tuesday, Maduro said in his annual address to the nation that "this year, 2020, there are elections to elect a new National Assembly, and the people will fix this conflict with their votes, with their political will."