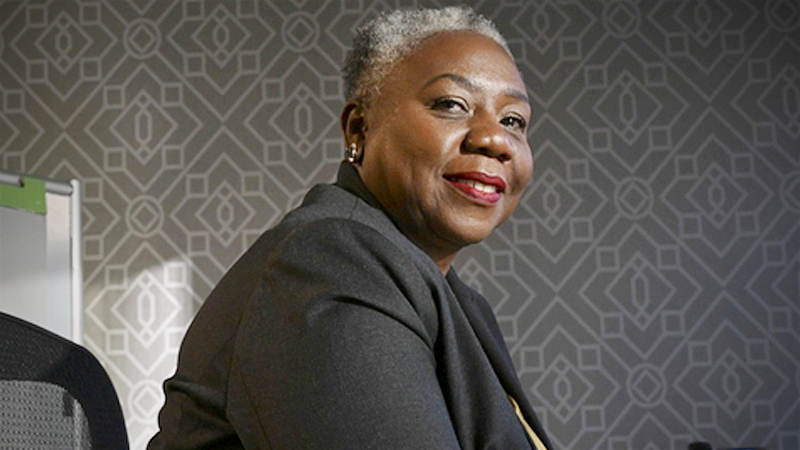 WASHINGTON - I underwent analysis a few weeks ago, and a few things popped out.

"You spread yourself too thin trying to be all things to all people." True.

"You get restless behind a desk all day." True.

You're stubborn, don't give up easily and prefer your own company. All true.

You have unresolved issues with your parents. Who doesn't?

This isn't a psychiatrist or psychic talking. It's handwriting analyst Beverley East, owner of Strokes & Slants, who profiles people through their penmanship - a field known as graphology.

East is also a forensic document examiner who specializes in tracking bank fraud, embezzlement and forgery. She has identified fake marriage licenses and traced a crew of embezzlers who made off with many millions of dollars.

"I love it because I get to unravel the crisis on paper," said East, whom I met at a reception at the Jamaican Embassy. "Each case is different. I bring truth and clarity to contentious situations."

She pulls in a low six-figure income that is augmented by royalty checks from "Finding Mr. Write: A New Slant on Selecting the Perfect Mate," her guide to identifying a new love through handwriting. She is working on her fourth book, "Whose Signature is it Anyway? Complexities of Caribbean Fraud."

East has had multiple careers: from retail to software, consulting to public speaking, forensic investigation to teaching. She's appeared on "Good Morning America" with Diane Sawyer to talk about "Mr. Write."

"I've done a ton of stuff during my working career," East said. "Whatever you do, wherever you do it, you have to be creative."

Forensic document examination accounts for 80 percent of her income. She has offices and residences in Washington, London and Kingston, Jamaica.

"Most of my work now is with large banks and government agencies," she said. "As the economy changes, crime increases in such areas as money laundering, internal fraud and embezzlement. I also get cases with anonymous notes, suicide notes and lot of discrepancies on wills and land transfers in the Caribbean."

Graphology and document examination are very different pursuits. The first focuses on profiling people through handwriting. For example, how someone crosses a 't' can indicate, in theory, whether that person is a daydreamer or strong-willed, a procrastinator or stubborn. Document examination is about verifying authenticity.

Spotting forgeries, she said, "is about comparing strokes to determine whether the writing was random and habitual. You look for too much similarity." Using a microscope, she can tell whether a signature is false because it looks as if it was drawn. When you have 50 documents and the signatures look exactly the same, then it's simulation. The forgers traced it, or they cut and pasted it.

"In the line quality, you can detect pressure patterns and how many times the forger lifted the pen compared to the genuine signature," East said. "A forger may not lift the pen in the same place that the writer lifted the pen because the forgers are concentrating on following the writer's letter formation."

East and her family migrated from Jamaica to London in the 1950s. Her father worked in accounting, and her mother was a seamstress.

East set out to be an interpreter but pivoted to public relations, advertising and marketing after graduating from college. She worked several jobs before landing a consulting gig at a London charity. It was there that she was hired, in part, based on her handwriting analysis.

"When I saw my handwriting report, everything about me was in it," she said. "I was drawn into handwriting analysis and fascinated."

She met her husband in London in the mid-1980s and followed him to Washington, where he practiced law. East continued her handwriting studies through the early 1990s, working with document examiners but staying out of the courtroom spotlight until she felt qualified to be an expert witness.

She's now divorced but credits her ex with encouraging her to tutor, consult and take speaking jobs ("people love British accents"). "My husband said, 'Try this. Try that.' "

When the economy tanked in 2007-2008 and business dried up, she started working her personal network. She spoke to friends, attended parties and receptions, visited people in their homes.

"I did everything," East said. "A lot of small businesses crumble because I don't think a lot of people realize how hard it is to be in a small business and be successful at it."

East's fees start at $900 for such jobs as verifying a will. The big bucks come from government agencies that hire East to follow internal and external money trails.

"That's what I have been able to tap into to make my company successful," she said.

East still receives jobs from companies that want her to evaluate potential hires through their handwriting. And from people who want to know whether they should start a relationship with a certain someone.

Her five-page take on this reporter's handwriting was a fun read but contained a big miss. "Undaunted by the threat of an uncertain paycheck, you would rather do your own thing," she wrote about me.

Not true. I love what I do, but I could not abide the occasionally pride-swallowing ordeal of daily journalism without the paycheck clunking into my bank account every two weeks.