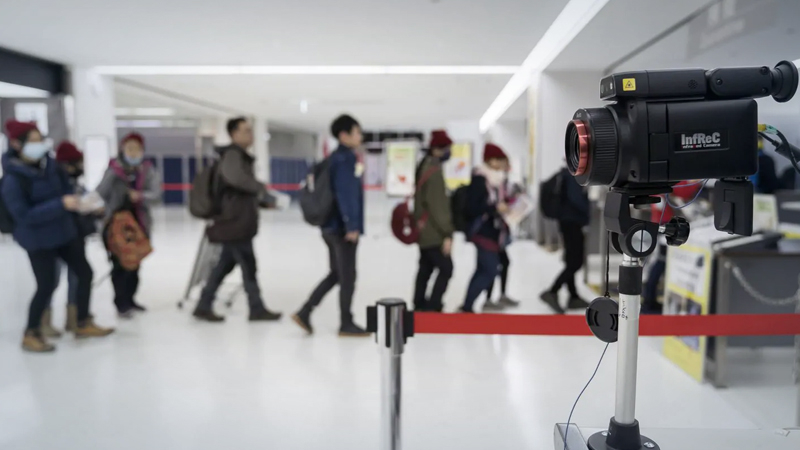 Federal health officials said Friday they will begin screening airline passengers arriving at three U.S. airports for a new virus from central China that has sickened dozens of people with pneumonialike illnesses and killed two.

Starting immediately, the screenings will be conducted at specially designated areas of Los Angeles, San Francisco, and New York's John F. Kennedy international airports. Those airports receive most of the travelers on direct and connecting flights from the central Chinese city of Wuhan, a major transportation and business hub where a cluster of pneumonialike illnesses was first identified last month, officials said. Staff from the Centers for Disease Control and Prevention will administer questionnaires and check for fever and other symptoms.

The announcement comes as millions of people in China are already traveling across the country and overseas for Lunar New Year, which officially starts Jan. 25. There are direct flights several times a week from Wuhan to San Francisco and JFK airports, including one scheduled to arrive Friday in New York at 10 p.m.

Three additional cases have also been reported in other parts of Asia, the most recent Friday in a Chinese tourist who traveled to Bangkok, according to Thai officials. There are no known U.S. cases.

The World Health Organization said in a statement Thursday that additional cases in other countries are likely, given global travel patterns, a sentiment that CDC officials echoed Friday.

"This is a serious situation," said Nancy Messonnier, who oversees CDC's National Center for Immunization and Respiratory Diseases. Referring to previous epidemics of serious and complex respiratory outbreaks caused by new viruses that sickened thousands and killed hundreds around the world in the last two decades, she said it was crucial for the United States to be proactive and prepared.

At the start of an outbreak, the earliest cases tend to be the most severe, she said. "As we do more testing, we're likely to see more cases, and I think we'll see at least a case in the United States," she told reporters during a Friday news briefing. "That's why we're moving forward so quickly with this screening."

About 5,000 people arrive at the three airports weekly, monthly on direct or connecting flights from Wuhan, said Martin Cetron, director of CDC's division of global migration and quarantine. Only JFK and San Francisco airports have direct flights.

About 60,000 to 65,000 people arrive on direct and connecting flights from Wuhan every year in the United States, he said.

The risk to Americans is low, officials said. "But the earlier we detect, the better we can protect," Cetron said.

CDC staff will ask travelers about symptoms, places they have visited in Wuhan, and take temperatures. Suspected cases of illness will be transported safely to pre-designated facilities in those cities, Cetron said. Many will likely end up being referred for further evaluation. That process may take hours and up to day, officials said. Testing for common viruses may only take hours. But testing for the new virus will require that specimens be collected and then sent to CDC. As a result, "it's unlikely [travelers] will make immediate connecting flights," Cetron said.

Travelers who do not have symptoms will be given a card with information about what to do and who to contact if they develop symptoms, he said.CDC officials acknowledged that in the middle of winter, it's far more likely that symptoms will be caused by common winter viruses than the new virus, he said. At airports in Asia, authorities have screened thousands of people before they identified the one or two individual cases, he said.

The three cases outside China include two Chinese tourists who flew to Thailand. The first tourist is in stable condition. The second arrived in Thailand on Monday with a fever, Thai authorities said. The third case is a Chinese resident of Japan whose case was confirmed on Thursday. He has recovered. All three travelers flew from Wuhan.

New information from China late Friday about additional infections among people who had close contact with initial patients, but did not go the animal market believed to be the origin of the outbreak, provides more evidence for human to human transmission. The patient in Japan also had not been to the Wuhan animal market but had "potential close contact with unspecified pneumonia patients in China," according to the Japanese Ministry of Health.

One reason for concern is that the new pathogen is in the family of viruses that includes severe acute respiratory syndrome, or SARS. The SARS epidemic began in China in November 2002 and over eight months, infected more than 8,000 people, killed 774 and sparked mass panic as it spread across more than two dozen countries before it was contained in the summer of 2003.

SARS spread to humans through infected civet cats sold in live animal markets. Most patients in the Wuhan outbreak also worked or had some other exposure to a large live animal and seafood market that Chinese authorities shut down Jan. 1.

The airport screening is the first time such monitoring has been deployed for an infectious disease since the Ebola epidemic in 2014, when officials screened travelers arriving at U.S. airports from three West African countries: Guinea, Liberia and Sierra Leone.

Screening during Ebola took place a week after a man flew from Liberia to Texas and was later diagnosed with Ebola. No cases were detected.

Since Wednesday, passengers at the international airport in Wuhan have been required to pass through electronic temperature sensors at each of its doors, according to the South China Morning Post. Anyone with a temperature over 100 degrees is required to undergo a manual check and if high temperature is confirmed, "spend a period of time in a quarantine facility."

Health officials say they don't yet have enough information to draw conclusions about whether the new virus can spread easily from person to person, or describe its clinical features. The source of the virus also remains unknown.

But the emergence of a new respiratory illness that originated from an animal has raised concerns among health officials and infectious disease experts. If an infected person gets on a plane, "they have the potential to transmit the virus on the way, and the more people who are infected, the more chances the virus has to replicate in people and mutate," said Matt Freiman, a virologist and associate professor at the University of Maryland School of Medicine who studies coronaviruses.

Human coronaviruses, known for their crown-like spikes on their surfaces, cause illnesses of differing severity. Some transmit easily. Novel coronaviruses emerge periodically, with SARS emerging in southern China in 2002 and MERS, or Middle East respiratory syndrome, a decade later.

With cases of the new virus found in Japan and the most recent case in Thailand, there is increased worry of spread to a wider area, Freiman said.

"This also suggests that either animals shedding the virus are still in Wuhan or that there is more human-to-human spread than is recognized," he said. "Both of these scenarios are problematic for control of this new virus."

CDC's Messonnier said "there is some indication that limited person-to-person transmission is happening, including outside China." Based on preliminary information, the incubation period, or time from exposure to the infection and appearance of first symptoms, seems to be between two and 14 days, she said."But we don't have all the information at the level of detail that our scientists would prefer," she said. "We want to see every tidbit. We are more in a waiting mode. Things are still moving fast."

Of 45 confirmed cases in China, most were male, middle-aged and elderly, with early symptoms of fever and cough, Wuhan health authorities said. The patients included a man who worked at the closed market and his wife, who had never visited it. The two who died were both men over 60 with underlying chronic diseases. The first had been a regular customer at the market, but health authorities have not said whether the second had contact with it. Five others are reported to have severe illnesses.

Of the 45 cases, four - all men - were reported late Friday, Wuhan health authorities said. Their condition is stable. In addition, of 17 close contacts of the first confirmed patient in Thailand, at least one has low fever and mild cough, authorities said.

The number of serious illnesses indicate this "is a big worry, this is a legitimate infection and that this is really going to cause problems," Freiman said.

Several countries in Asia have increased surveillance and entry screening at airports and other transport hubs. Suspect cases with pneumonia and recent travel history to Wuhan have been detected in Hong Kong, Macao, Singapore, South Korea and Taiwan.

Analysis of air travel patterns to map the potential spread of the new virus found that the top 20 destinations for travelers from Wuhan are in Asia. Bangkok, Hong Kong, Tokyo and Taipei had the largest volume, according to a study in the Journal of Travel Medicine, based on 2018 travel data.