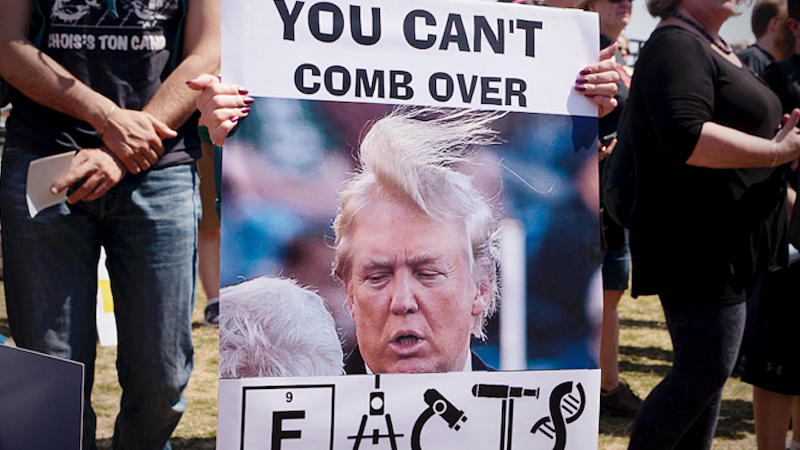 Activists, scientists and others rally on the Mall in 2018 at the March for Science. MUST CREDIT: Washington Post photo by Marvin Joseph.

KANSAS CITY, Mo. - Dozens of government computers sit in a nondescript building here, able to connect to a data model that could help farmers manage the impact of a changing climate on their crops.

But no one in this federal agency would know how to access the model, or, if they did, what to do with the data.

That's because the ambitious federal researcher who created it in Washington quit rather than move when the Agriculture Department relocated his agency to an office park here last fall.

He is one of hundreds of scientists across the federal government who have been forced out, sidelined or muted since President Donald Trump took office.

The exodus has been fueled broadly by administration policies that have diminished the role of science as well as more specific steps, such as the relocation of agencies away from the nation's capital.

While the administration has come under fire for prioritizing the concerns of industry at the expense of science in government decisions, the cumulative effects are just beginning to appear after three years of Trump in the White House.

Some farmers said the USDA staff upheaval has made it harder to access information they need.

Torrential rains last spring dashed the plans of Liz Brownlee, who runs a livestock farm with her husband, to expand her pasture in Crothersville, Indiana. Then an unseasonably dry autumn brought 90-degree days that baked the farmers' seeds.

"With all this uncertainty from climate change, I need the best data possible" to know when to plant, she said. "I'm worried I'm not going to have it."

In the first two years of the Trump administration, more than 1,600 federal scientists left government, according to Office of Personnel Management employment data analyzed by The Washington Post. That represents a 1.5% drop, compared with the 8% increase during the same period in the Obama administration.

One-fifth of the high-level appointee positions in science are vacant - normally filled by experts who shape policy and ensure research integrity.

Of those who departed, the numbers were greatest among social scientists, soil conservationists, hydrologists and experts in the physical sciences - chemistry, geology, astronomy and physics.

At the Environmental Protection Agency, nearly 700 scientists have left in the past three years, according to The Post analysis. The EPA has hired 350 replacements.

Linda Birnbaum, who spent four decades working on toxicology and public health issues at the EPA and National Institutes of Health before retiring in October, said the loss of expertise weakens the government's ability to make sound decisions.

"It's going to take a long time for government science to come back. There's little doubt about that," said Birnbaum, who serves as an adjunct professor at Duke University and the University of North Carolina at Chapel Hill. She added that NIH has remained well-insulated because it enjoys bipartisan support in Congress.

"But when I look at colleagues in other agencies, especially any agency that has any regulatory role, they're decimated," she said.

Trump administration officials dismiss that notion, saying much of the criticism comes from activists outside the federal government.

Interior Secretary David Bernhardt points out that he is the first secretary to enlist a career federal scientist to serve as his scientific adviser.

"I've got an ideas box, I haven't seen that," he said in an interview, referring to complaints that science has been de-emphasized. "I do hear that from advocates and external parties. And, you know, anybody that looks at these things objectively tends to find that they're without merit."

Last year, the environmental group Center for Biological Diversity accused Bernhardt of pushing aside the conclusions reached by career scientists at the U.S. Fish and Wildlife Service regarding how a pesticide affected endangered species. Eight Democratic senators sought an investigation. Interior's inspector general concluded there was "no evidence" Bernhardt abused his position.

As a presidential candidate, Donald Trump called climate change a "hoax." Once in office, he began dismantling much of President Barack Obama's climate plan. He has installed industry figures in regulatory roles and rolled back scores of rules and policies that he considers harmful to the fossil-fuel industry. Trump's actions spurred scientists into the streets, joining protesters for a March for Science rally on the Mall in 2017 and again in 2018.

Many scientists who work for the U.S. government or rely on its funding say the changes brought by the Trump administration are being felt across the country.

After historic rainfall last spring swept away livestock and grain in the Midwest, crop planting was delayed by weeks. Andrew Crane-Droesch, 38, a researcher at the Agriculture Department's Economic Research Service, started work on a data tool that could predict months in advance the impact of, say, heavy rainfall on crop prices or planted fields. He hoped that knowledge could help farmers, commodity traders and government disaster planners prepare.

But when Agriculture Secretary Sonny Perdue moved forward with his controversial plan to relocate the Economic Research Service and the National Institute of Food and Agriculture - two key research agencies - to Kansas City, Crane-Droesch headed for the exit.

He joined two-thirds of affected employees in his division who either retired or found other jobs rather than move to the greater Kansas City region. At the National Institute of Food and Agriculture, which oversees $1.7 billion in scientific funding for researchers, nearly 8 of every 10 employees have left.

Crane-Droesch, who took a health-research job in Philadelphia, said there's no one left at the USDA who has the time or the know-how to run the model he created or to finish the project.

"All that work was for naught, and they nuked the account," he said. "Even if they hired somebody for my portfolio - which I don't think they did - it would take that person quite a while to get up to speed, just as it took me several years."

The move to Kansas City has also meant dozens of reports and millions in research funding have been delayed or scuttled as the Agriculture Department scrambled to keep up with departures.

The agency has been forced to hire back 21 retired employees on temporary contracts, to stanch its losses.

But experts on bee pollination, organic farming, commodity markets and trade are gone, setting back research that has been in process for months or even years.

"They never tried to refute our work; they tried to bury it by getting rid of the people who produced the work," Crane-Droesch said.

To restore the National Institute of Food and Agriculture and the Economic Research Service to their size under the Obama administration, the USDA would have to hire more than 400 people. One USDA official said the department has "well over 150 active recruitments in process between both agencies."

Current and former employees interviewed said they felt the move to Kansas City was intended to diminish research areas such as trade policy, farm income and climate change; Perdue is a climate skeptic who recently described the problem as "weather patterns, frankly."

A USDA spokesman defended the move, saying that Perdue believes the agencies can better serve "customers" - farmers, ranchers, academic institutions and agribusiness - by relocating to Kansas City, "a hub for all things agriculture in America's heartland."

The department estimates it will save $300 million over 15 years from employment and rent in Kansas City.

Some federal researchers said they left the Trump administration after concluding their work was being undermined.

Dan Costa, who worked at the EPA for 34 years before stepping down as director of its air, climate and energy research program in January 2018, said the tipping point for his retirement came when an EPA spokesman undercut a study published in the New England Journal of Medicine that the agency had funded.

The study found that long-term exposure to levels of soot and smog lower than current national standards can cause premature death among older Americans. Such a finding suggests that current standards don't adequately protect public health, which would have implications for industries that pollute. An unidentified EPA spokesman attacked the study in an interview with the Washington Times, an act Costa called "scientifically unethical."

Peter Van Doren, a senior fellow at the libertarian Cato Insitute, said in an interview that scientists need to remember that they don't set policy.

"When nerds and politicians disagree, nerds lose," he said. "Scientists think, 'We are smart, and we ought to decide.' But we don't get to decide."

Elsewhere in the government, political appointees have delayed grants for scientific work.

At Interior's U.S. Geological Survey, Director James Reilly "felt that he needed to personally look at every grant that went out," according to Bernhardt's science adviser William Werkheiser, who served as Reilly's deputy before joining the secretary's office. The process stalled grants at the agency's climate adaptation science centers for more than six months.

The centers fund university research to help wildlife, lands and people adjust to a changing climate.

Robin O'Malley, who retired last month as director of one climate adaptation center, said in an interview that the slowdown in hiring and grant approvals has hampered the centers.

"They haven't said no to us at any time, they've just made it difficult to move forward," he said. "You're up a creek."

Across the government, the administration is scaling back advisory committees that offer input to policymakers from scientists and other experts. Last year, Trump required agencies to eliminate one-third of their advisory panels, with a few exceptions.

Will McClintock, a marine scientist who has helped dozens of countries establish marine sanctuaries, used to serve on the National Oceanic and Atmospheric Administration's Marine Protected Areas federal advisory committee.

After seeing that people were mailing in hand-drawn maps to nominate reserves, McClintock created a Google Maps-like program called SeaSketch that allows fishermen, divers and conservationists to propose sanctuary zones alongside scientists and government officials.

"I'm bringing lots and lots of expertise, for free, to our federal government," said McClintock, a project scientist at the University of California at Santa Barbara who volunteered on the advisory panel. But before NOAA could adopt the software, his federal advisory committee was eliminated.

Some Republicans have supported the executive order to cut advisory committees. "Based on the characterization made by many of my colleagues and their friends in the media, you would think this order was a death blow to science at all the agencies," said Rep. Ralph Norman, R-S.C., to EPA Administrator Andrew Wheeler at a hearing in September. "In reality it just seems like a common sense, nonpartisan way to eliminate wasteful committees."

The Office of Management and Budget declined to estimate the cost savings from cutting the committees. "The administration is always looking for ways to end redundant and out of date programs - this is an open and closed case where taxpayer resources are better used elsewhere," the office said in a statement.

It is unclear whether the USDA relocation will ultimately save taxpayers $300 million over 15 years as promised. For now, employees transferred to Kansas City are working out of an existing USDA office until permanent space is leased.

Earlier this month, the boxy building about six miles outside the city's central business district had the feeling of the first day of school. New hires waited to sign in, get security badges and learn where to park.

"We lost a lot of people, and we're trying to rebuild," said Daniel Hellerstein, an economist who researches the economic impact of soil conservation. Hellerstein was one of the retiring employees who was temporarily hired back but remains in Washington. "It's going to be difficult because the slots we need are fairly skilled, and there's a lot of competition out there for qualified people."

Much of the impact of the federal government's shrinking science capacity will not be felt for years, observers said.

"If we're gone, is the world going to be a worse place?" he mused. "I like to think so. But it's not going to be immediate."