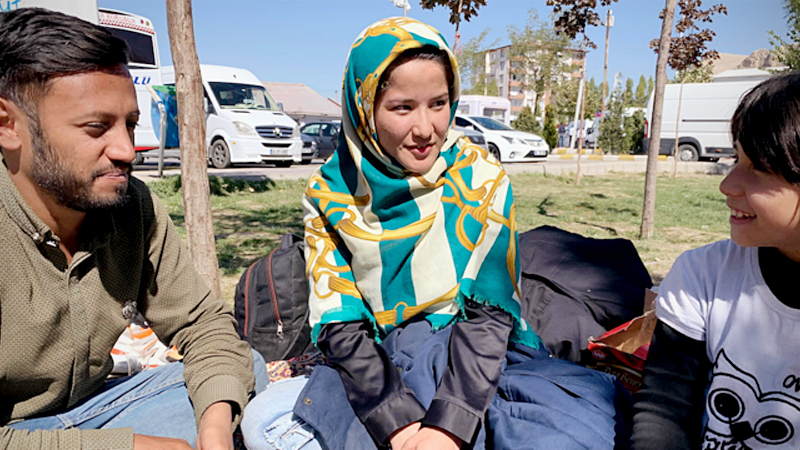 Tamana Ghulami, center, an Afghan refugee who lived for years in Iran, sits with her husband and another relative at the Van bus station. Ghulami, 20, is one of tens of thousands of Afghans who have crossed into Turkey illegally this year, according to government statistics. MUST CREDIT: Washington Post photo by Erin Cunningham

VAN, Turkey - Decades ago, the Soviet invasion of Afghanistan prompted thousands of people to flee to neighboring Iran. Now, many of these refugees are once again seeking a new home in a new land, Turkey, desperate to escape the dire economic conditions fueled by U.S. sanctions on Tehran.

Tens of thousands made the dangerous, cross-border trek last year into Turkey, a U.S. ally that is already heaving under the burden of refugees fleeing unrest on its borders. 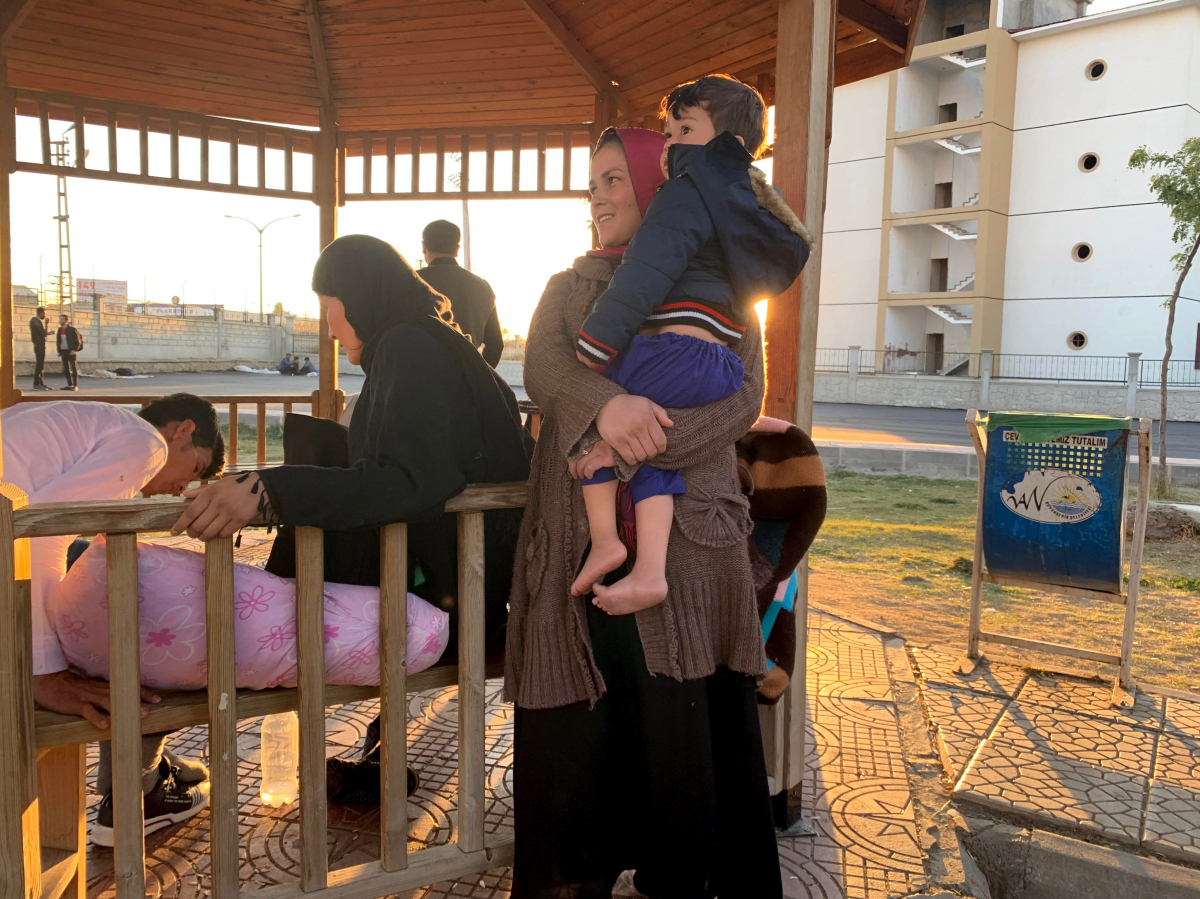 Turkish authorities are grappling with nearly 4 million refugees. This is the world's largest population of displaced people, according to the United Nations, including more than 170,000 registered Afghan refugees. Turkey has struggled to contain the influx even as aid agencies say the number of arrivals from Iran is on the rise. 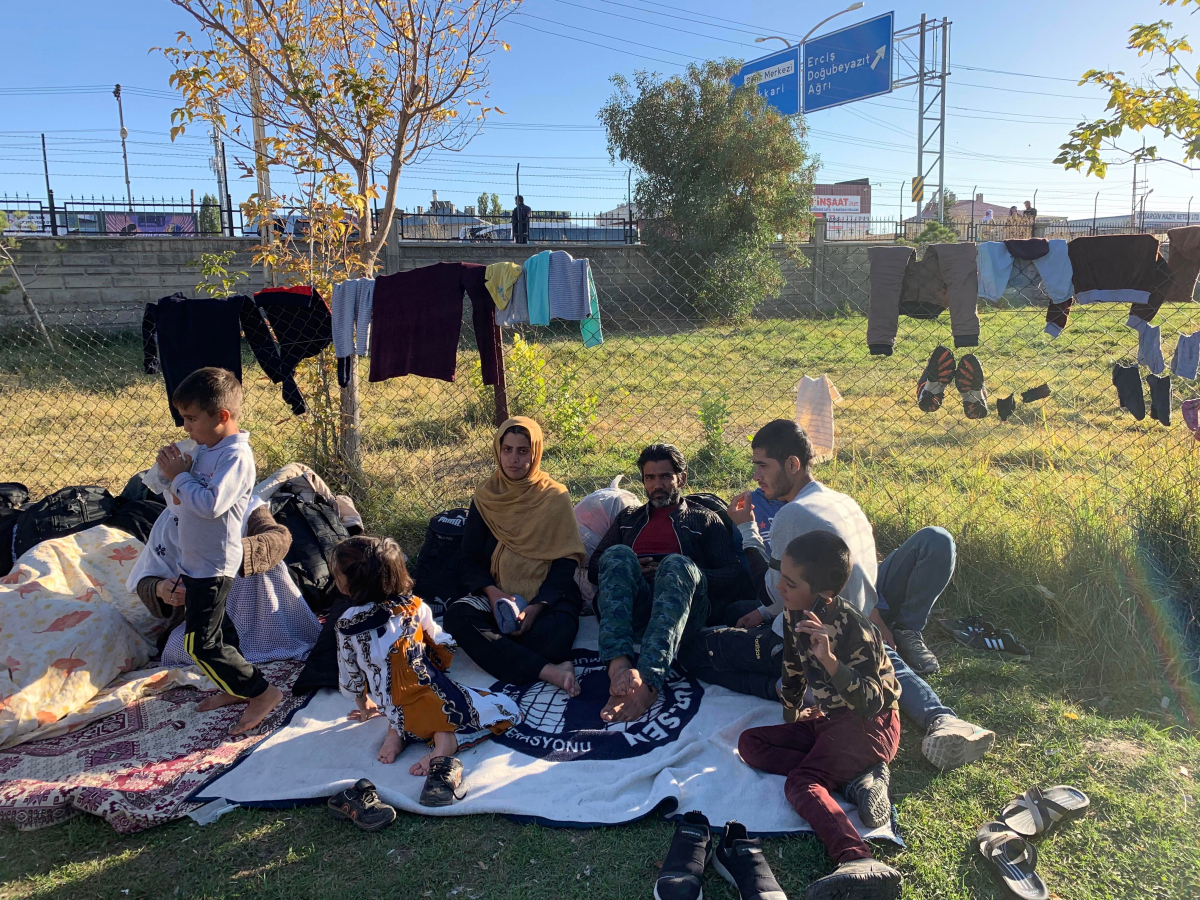 In the eastern Turkish city of Van, about 50 miles west of the Iranian border, a growing number of Afghan refugees are forced to sleep on the streets and in public parks and bus terminals, barred by Turkish authorities from traveling farther. Many of them were either born in Iran or lived there for years.

This fresh crisis is one of the unintended consequences of President Donald Trump's "maximum pressure" campaign, which his administration hopes will compel Tehran to negotiate an end to its nuclear energy and ballistic missile programs.

The strategy includes a broad trade embargo with restrictions on banking transactions, oil exports, supplies to Iran's automotive sector and more. Last month, Iran abruptly raised the price of gas to shore up funds for cash handouts, setting off a wave of nationwide unrest, including in areas with large Afghan communities.

Afghans make up the largest group of people crossing the border illegally into Turkey, according to Interior Ministry data. The government says more than 184,000 undocumented Afghans crossed last year - up from about 100,000 in all of 2018. The government does not distinguish between Afghans who lived in Iran before crossing into Turkey and those who simply transited through Iran.

Many more Afghans have slipped over the border undetected, local refugee aid organizations say, the majority of them fleeing hardship in Iran.

Refugees who have made the journey describe harrowing treks over rugged terrain littered with the corpses of those who perished along the way. Some collapsed from exhaustion or were separated from their families amid the chaos and wandered off in the dark. Others say they were shot at by Turkish or Iranian security forces or abandoned by smugglers charging the equivalent of thousands of dollars to hustle them across.

Ramazan, a man from Afghanistan's Ghazni province who uses only one name, recently arrived with his three children. As they walked through the mountain passages at night, he said, his wife fell from the ridge. He could hear her screams from the canyon, he said, but the smugglers forced them to keep walking.

"We walked for 24 hours. We could see the bodies of people who fell to their deaths. People had broken arms and broken legs. Some of the elderly were left behind," said Maryam Fazly, an Afghan mother of six who said she had lived in Tehran for 10 years.

The soft-spoken widow from northern Afghanistan was sitting forlorn with her children in a grassy lot at the main bus terminal in Van. They had arrived just days earlier, fearing they could no longer survive in Iran.

Police have ordered refugees to squat at the bus station while local authorities prepare to register the new arrivals. Once processed, they are either transferred to another city, moved into a guarded tent camp or, in some cases, deported to Afghanistan, a place many of them have never even seen.

Iran hosts about 1 million Afghan refugees who are registered with the United Nations and permitted to work in certain industries. Afghans began arriving in large numbers following the 1979 Soviet invasion of their country.

Aid agencies and the U.N. say that as many as 3 million Afghans live in Iran, most of whom are undocumented and, therefore, uniquely vulnerable to economic and social strife.

On a recent afternoon at the Van bus station, dozens of Afghan families napped together on woven carpets in the grass while women bathed children in a small fountain and hung laundry on a rusty chain-link fence. One man in a gray suit, an Afghan who said he had lived in Iran for 30 years, wandered the parking lot with a warm kettle, pouring tea for his fellow refugees.

"A lot of Afghans are leaving Iran for Turkey because of the economic situation. Everything got worse for us because of America's new policies toward Iran," said Tamana Ghulami, 20, a refugee who had lived in Tehran with her Afghan husband, an out-of-work tailor.

The couple traveled to Van with relatives who say they left Afghanistan over the summer because of threats from Taliban insurgents in their farming village in the north. The extended family said they sought a more stable life in Turkey or Europe.

"In Iran, there are no jobs and there are even fewer jobs for Afghan refugees," said Ghulami, a turquoise-and-gold-patterned scarf framing her face. "Everything is expensive, and we have no authorization to work. We knew that we wouldn't even be able to afford having children if we stayed there."

Ghulami's tale of poverty and insecurity was echoed by dozens of other refugees at the bus station. In Iran, they said, they had eked out a meager existence as part of a migrant underclass, taking menial jobs as day laborers, farmhands, tailors and blacksmiths. They faced discrimination at work and on the streets, living under the constant threat of deportation and regular abuse by police.

When the United States reimposed sanctions in 2018, Afghans were among the first to suffer the fallout. Imports fell and prices rose, putting basic food items out of reach for many Afghan families. Business owners halted payments to employees or laid off workers, citing the drop in trade.

"I worked in the basement of a shop making shoes. But even as prices grew higher, my salary stayed the same," said Reza Ahmadi, 23. He said he left Afghanistan as a child when the Taliban were in control and had lived in Iran ever since.

"When the sanctions started, our boss stopped paying us on time or he would pay us less than what we were owed. One day I would have work and the next day there would be none," he said. "It was so hard."

According to the Norwegian Refugee Council, the largest of only five international nongovernmental aid agencies working in Iran, even the delivery of aid to Afghan refugees is at risk because banks are refusing to transfer money because of the sanctions.

"We are hitting brick walls on every side," Jan Egeland, the organization's secretary general, said in a statement.

As a result, Egeland said, "the number of Afghans in need has nearly doubled and pushed almost 3 million people into emergency levels of hunger."

Rajaba Rezai, 50, arrived in Iran from Afghanistan's Samangan province as a teenager. Despite Iran's labor restrictions on Afghans, Rezai said, he eventually managed to open a plastics manufacturing workshop in the city of Qom, where he produced rubber sandals sold in local bazaars.

But the Trump administration sanctioned Iran's largest petrochemical holding company and more than three dozen of its subsidiaries. Soon, the synthetic plastic polymer that Rajaba needed to manufacture the shoes became unaffordable. Then, customers stopped placing orders. So, after more than three decades in Iran, Rajaba sold his factory and fled to Turkey with his wife and children.

"We could barely tolerate our lives before, but then we simply could not handle the situation anymore," Rajaba said from his sparse apartment in Van. "I had no money and no life. We decided to escape from this hell."

Rajaba, like the other refugees, described a perilous trip across the border with his wife, who was pregnant at the time.

At a cemetery north of Van, the growing number of freshly dug graves is a testament to the dangers of the journey - and how many are making the trek.

Seyyed Mustafa Hashimi, an Afghan who has lived in Van for more than a decade, oversees the burials. In recent months, authorities have had to expand the cemetery to accommodate the rising number of Afghan refugees dying along the way.

Some of those buried here, on a gentle slope near the central train station, were killed in road accidents as smugglers transported them from the border. Others perished on mountain trails and were retrieved by Turkish forces. Most of them died this year.

Many carried no identification. Their graves include a simple cement marker painted with a mix of numbers and letters.

"If the morgue cannot find their families, either dead or alive, they will call me and I will bury them - without any name, without anything," said Mohammed Hussein Soltani, 34, an Afghan imam who volunteers to wash and prepare the bodies for burial.

"They lost hope in their lives, so they came here," he said. "But there is no solution."