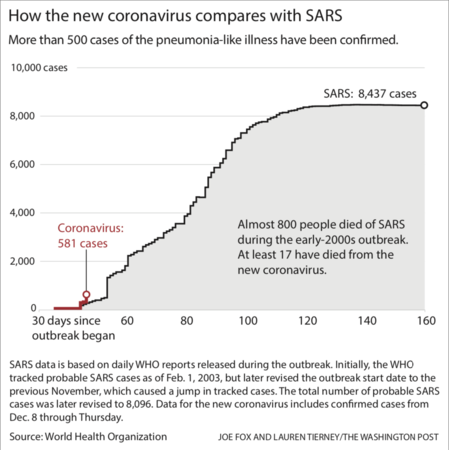 Global health officials have almost as many questions as answers about the mysterious, pneumonia-like virus that originated in China last month and has spread to at least five other countries, including the United States. How exactly is it transmitted? How infectious is it and, most critically, how deadly?

They do know that the new virus is believed to have come from animals sold in a Wuhan market and that it shares many similarities with SARS, the coronavirus that also originated in an animal-to-human transmission in China in 2002, though it does not appear to be as deadly.

Similar to SARS - or severe acute respiratory syndrome, which infected more than 8,000 people and killed nearly 800 before it was mostly contained in 2003 - the new virus spreads through close person-to-person contact. Each infected person seems to spread the virus to about two others, through coughing or sneezing or by leaving germs on a surface that is touched by non-infected people who touch their faces, said Colleen Kraft, who is associate chief medical officer for Emory University Hospital and helped treat the first U.S. Ebola cases in 2014.

The latest report from Chinese health authorities put the death toll from the new coronavirus at 25, with 1,072 suspected cases nationwide.

It is not nearly as infectious as the measles virus, which can live for up to two hours in the air after an infected person coughs or sneezes. Nor does it appear to be anywhere near as deadly as Ebola, which is also much harder to transmit. Ebola is passed largely through direct contact with an infected person's blood or bodily fluids.

Yet Kraft and global health officials from the World Health Organization cautioned that understanding of the novel virus is still evolving and that the way it spreads and infects people could also change over time.

"The transmission is going to be the same as other respiratory viruses," Kraft said. "Whether it's more severe in a person or lasts longer on the surface, those are things that can change. As we learn those things, we can gauge what our panic mode needs to be."

The WHO on Thursday said it was still too early to declare the outbreak an international public health emergency - a step the international body ultimately took for Ebola in 2014 and Zika in 2016.

Coronaviruses range from the common cold to more-severe diseases such as SARS and Middle East respiratory syndrome, or MERS. Some coronaviruses, including this new one, can cause severe symptoms and illnesses, including pneumonia.

Yet because there are still so many unknowns, there are many scenarios of how this virus could spread, said Tom Frieden, former director of the Centers for Disease Control and Prevention.

An unlikely possibility is that it can be transmitted as readily as the common cold and cause severe pneumonia in a small fraction of people, Frieden said. "That seems quite unlikely, but it would be alarming because it could become like a circulating strain of flu all over the world," Frieden said.

Another possibility: The virus spreads like SARS - in other words not as readily as the flu - but causes less severe illness than that sister virus. "That would be concerning but not as alarming, and potentially more controllable," he said.

There is no vaccine or treatment for this coronavirus, but the National Institutes of Health said human trials for a coronavirus vaccine could begin within three months. It is spreading in health-care settings, which officials say is also cause for concern.

"Many things are giving us an advantage, but our disadvantage is the unknown - not fully understanding the disease, its severity and its transmission," Michael Ryan, executive director of the WHO's health emergencies program, said at a news conference Thursday.