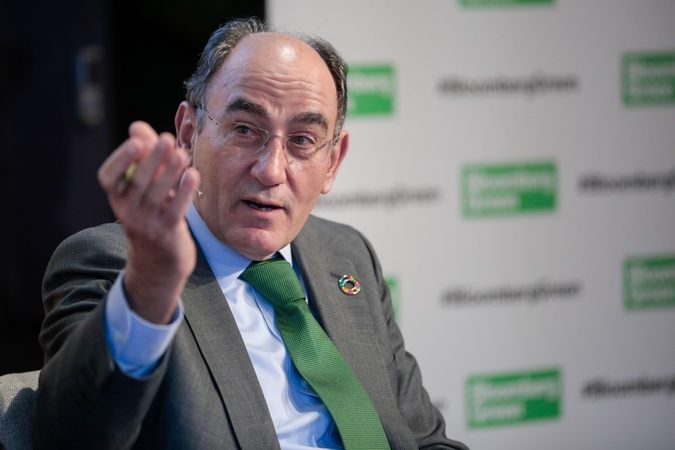 Ignacio Galan, chairman and chief executive officer of IberdrolaA, speaks during a panel session at a Bloomberg event on day two of the World Economic Forum (WEF) in Davos, Switzerland, on Jan. 22, 2020. MUST CREDIT: Bloomberg photo by Jason Alden.

From Galicia in the north to Andalucia in the south - Spain's old coal plants are running out of steam.

The Iberian nation last year cut use of the dirtiest fossil fuel faster than anyone else in western Europe as renewable energy and cleaner natural gas take over. The combustible rock, which has kept the region humming through world wars and economic boom times, is increasingly out of favor with lawmakers and executives under pressure to do more to stop global warming.

"We are in a hurry, we have to move fast, everybody has to move fast,'' Iberdrola Chief Executive Officer Ignacio Galan said on Tuesday at the World Economic Forum in Davos. The Spanish utility plans to permanently shut its two remaining coal-fired power stations this year, replacing them with new wind and solar capacity.

Coal's share in the nation's electricity fell to a four-decade low of less than 5% from 14% a year earlier, according to the nation's grid operator Red Electrica. The sharp drop is yet another sign how the unprecedented surge in renewable power output coupled with the lowest seasonal gas prices in a decade have upended traditional energy economics.

Spain was anticipating exiting the fuel by the end of the decade, while the U.K. will shut all its plants by 2025. Germany last week struck a deal with its biggest power producers.

"The fall in coal generation means Spain could phase out the fuel much faster than the government ever imagined," said Dave Jones, an analyst at non-profit group Sandbag in London.

The nation burned as much as 70% less coal in 2019 than a year earlier, while the level in Germany fell 28%, according to data from S&P Global Platts.

The Spanish government made a start by shutting all coal-mining operations last year after striking a deal with unions to invest 250 million euros ($277.7 million) in impacted regions to enable a smoother transition to a green economy. That allowed a tax on burning natural gas at power plants to be abolished. It had been introduced to prop up the ailing mining industry.

Output is poised to fall further this year as both Iberdrola and Naturgy Energy Group plan to retire their plants this year. Energias de Portugal and Viesgo Holdco will shut their units by the middle of the decade. That would leave Endesa, the biggest producer of power from coal, as the only remaining operator after 2025. The company said that from 2022, its last operating plant will run for less than 10% of its theoretical maximum hours in any given year.

If the utilities stick to earlier statements, then Spain could be entirely without coal as early as 2027.

The prevailing market and political forces working against coal mean that Spanish plants faced a projected loss of 992 million euros in 2019, according to a report from Carbon Tracker, a think tank focusing on the energy transition.

The nation's lead in exiting coal is helped by having some of the best renewable resources in Europe, which, coupled with subsidies, has stimulated more power capacity than needed to keep the lights on.

"Spain is the most oversupplied electricity market in Europe," said Jones. "So it has the capacity to shut coal power plants and not wait for new capacity to come online."

Preliminary analysis from the group showed that the fuel's share of Europe's electricity mix fell by 23% in 2019 from a year earlier and is set to decline further in 2020.

Spain's new coalition government plans to pass a climate law, proposed more than a year ago, saying that all electricity needs to come from renewables by 2050. It also includes plan to reach 74% by 2030. Spain generated 38% of its electricity from green sources last year.

For Jahn Olsen, a London-based analyst at BloombergNEF, coal is unlikely to ever bounce back after the jump in carbon emission costs in Europe over the past couple of years.

"The rationale to keep running coal power plants in Spain just isn't there," he said. "These plants are losing money right now, and they will continue to lose money in the coming years."