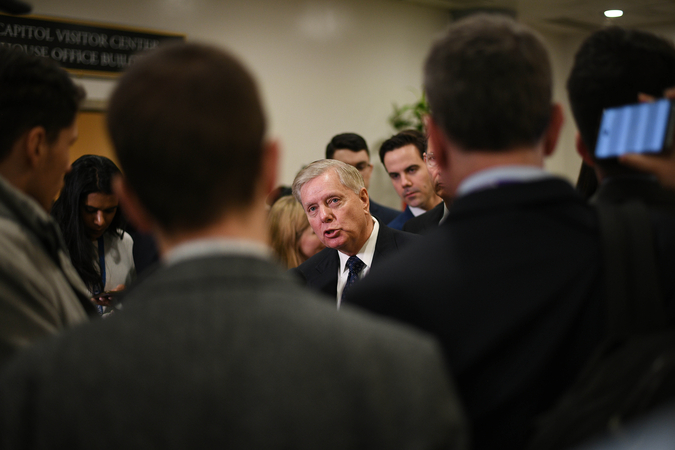 Sen. Lindsey Graham, R-S.C., speaks to reporters after the fifth day of the Senate impeachment trial of President Donald Trump on Saturday, Jan. 25, 2020. MUST CREDIT: Photo for The Washington Post by Astrid Riecken

WASHINGTON - Lawyers for President Donald Trump argued Saturday that he had valid reasons for withholding military aid to Ukraine and that House prosecutors overlooked facts that are more favorable to his case, giving a short preview of the aggressive defense they are expected to mount next week in the Senate impeachment trial.

In a two-hour presentation that reserved their most provocative attacks for Monday, members of Trump's legal team echoed the president's justifications for his actions toward Ukraine and sought to plant doubts about both the prosecutors' case and its lead advocate, Rep. Adam Schiff, D-Calif. 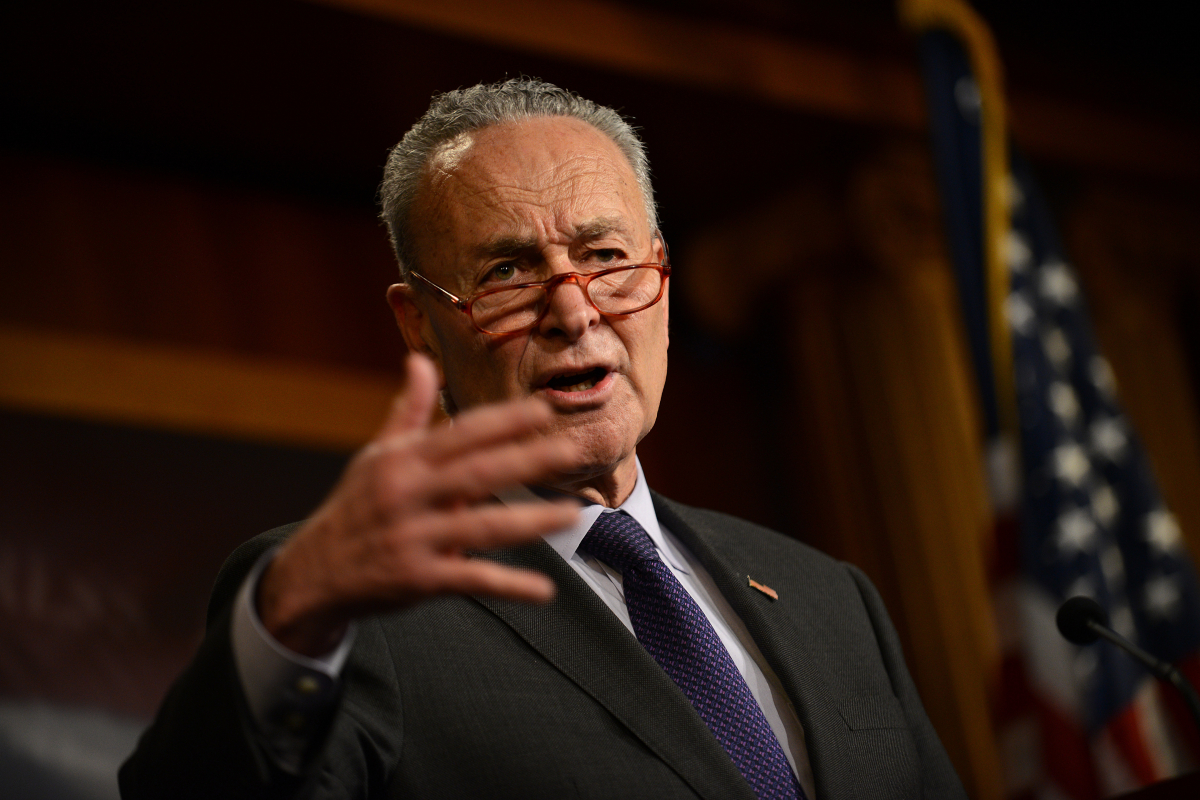 Yet in arguing that the case for Trump's removal was partisan and misleading, lawyers for the president omitted facts, presented claims that lacked context or downplayed evidence gathered by House investigators. Their most sweeping arguments did not specifically defend Trump, but instead framed impeachment as no more than a politically motivated effort to remove him from the ballot in November. 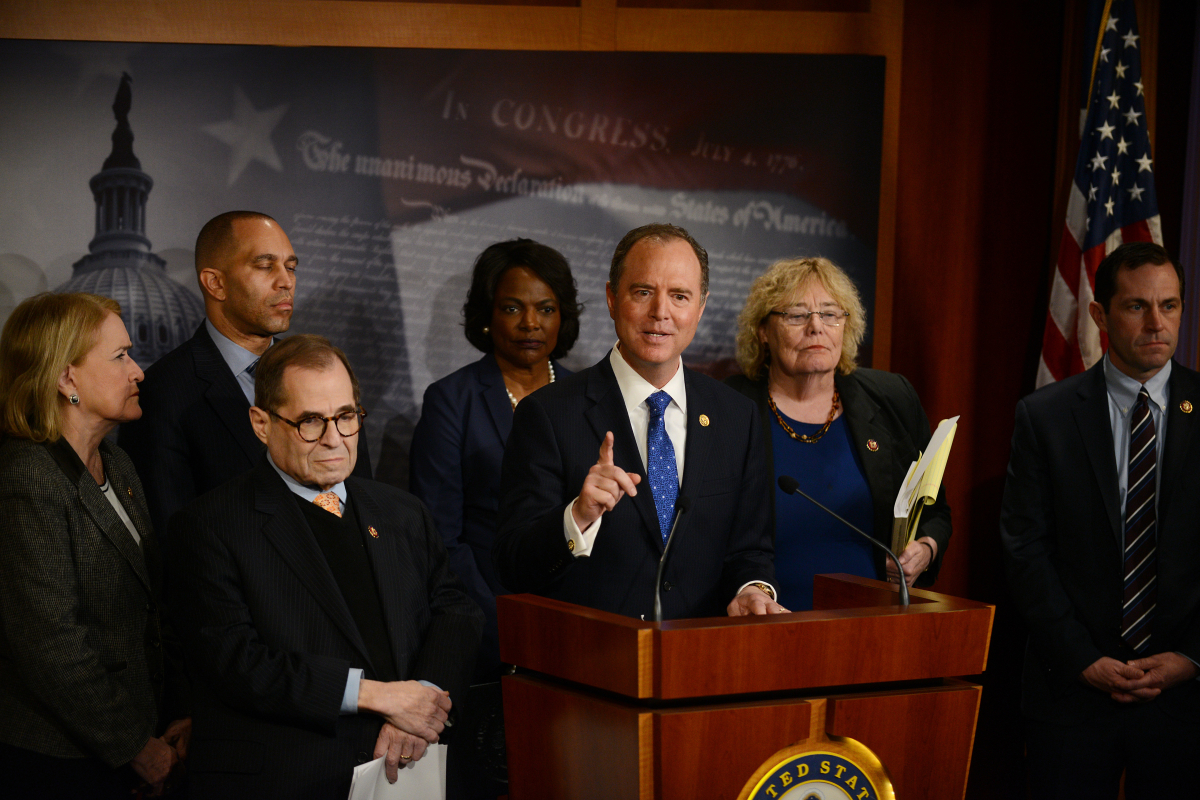 "They're here to perpetrate the most massive interference in an election in American history," said White House counsel Pat Cipollone, who said Trump did "absolutely nothing wrong."

After three days of arguments in favor of Trump's removal from House Democrats, most Senate Republicans rallied behind the president's defense, predicting acquittal. But a small group of closely watched Republicans largely reserved judgment or declined to comment, leaving open the question of whether the trial will include witnesses. Democrats need four Republicans to join them to secure further testimony or evidence.

Trump faces the third presidential impeachment trial in U.S. history amid accusations that he withheld military aid and an Oval Office meeting to pressure Ukraine's leaders into announcing investigations of his political rivals, including former vice president Joe Biden, now a presidential candidate. Trump was impeached by the House in December on charges of abuse of power and obstruction of Congress related to these allegations and his directive that his administration not cooperate with the House's investigation.

His team's opening argument came on a day when more evidence emerged outside the Senate: A video was released showing Trump ordering the firing of Marie Yovanovitch, the U.S. ambassador to Ukraine, at a 2018 donor dinner. His order came minutes after Ukrainian American business executive Lev Parnas criticized her as an impediment.

Yovanovitch was removed more than a year later. Parnas is now under indictment on campaign-finance charges, and the video was released by Parnas' attorney.

At the end of a marathon week of presentations before the Senate, Trump's lawyers began speaking at 10 a.m. and ended by noon, allowing senators to return home for a short period before the trial resumes at 1 p.m. on Monday. The next session is expected to include full-throated attacks on Biden and his son Hunter, who served on the board of Ukrainian gas company Burisma while his father was in office and has become a target for criticism by Republicans. The intent is to argue that Trump was justified in seeking investigations into the Bidens despite the Ukrainian government never accusing them of any wrongdoing.

On Tuesday, Chief Justice John Roberts Jr., chastised both the House managers and the president's defense team for using overheated rhetoric as they debated ground rules for the trial. But when Trump's lawyers took the podium on Saturday to begin rebutting the managers' case, their tone was largely subdued.

"We are going to be very respectful of your time," Cipollones said in his opening remarks. "You heard the House managers speak for nearly 24 hours over three days. We don't anticipate using that much time."

The lawyers painted Trump as having sincere concerns about corruption in Ukraine, despite evidence to the contrary, and suggested he was justified in doubting the intelligence community's conclusion that Russia, not Ukraine, interfered in the 2016 presidential election.

In taking this approach, the lawyers landed repeatedly on themes that matter to Trump, including what he has described as his "perfect" July 25 phone call with Ukrainian President Volodymyr Zelensky, special counsel Robert Mueller III's report and omissions and errors by the FBI in documents submitted to the Foreign Intelligence Surveillance Court during the 2016 investigation of the Trump campaign and Russian interference in the election.

Because of that case, Trump attorney Jay Sekulow argued, the president had reason not to "blindly trust some of the advice he was being given" by intelligence officials.

Taken together, the lawyers' remarks laid the foundation for a defense of Trump's unconventional foreign policy toward Ukraine, led by his personal attorney Rudy Giuliani; and an attempt to shore up Trump's claim that by seeking investigations of the Bidens, he was working to fight corruption, not undermine a political opponent who he might face in November.

Focusing on the July 25 call, deputy White House counsel Michael Purpura suggested that witnesses who expressed concerns about it were politically motivated and said Trump's conversation with Zelensky reflected the administration's "legitimate concerns about corruption" in Ukraine.

A rough transcript released by the White House shows the president did not mention "corruption" or a general concern about the issue - only a theory about Ukrainian influence in the 2016 election that has been discredited and his request that Kyiv scrutinize the Bidens.

Purpura also spent considerable time claiming that Ukraine did not learn about the hold on military aid until late August.

"There can't be a threat without the person knowing he's being threatened," he said.

While two Trump administration officials - Pentagon official Laura Cooper and State Department official Catherine Croft - testified that they believed that Ukrainians knew about the hold before that time, Purpura argued that others' testimony was more credible.

The second part of the defense's presentation sought to raise doubts about the legal and constitutional validity of the impeachment inquiry. Deputy White House counsel Patrick Philbin also mentioned the anonymous whistleblower, whose report helped launch the impeachment probe, and the House's decision not to investigate them.

"Motivations, bias, reasons for wanting to bring this complaint could be relevant," Philbin said. "But there wasn't any inquiry into that."

The details of the whistleblower's memo were confirmed by the rough transcript of the July 25 call released by the White House and by the evidence gathered during the House investigation.

In several moments, Trump's lawyers attacked Schiff, the chairman of the House Intelligence Committee who has helped to lead the impeachment inquiry.

Philbin noted that Schiff had once mischaracterized his staff's dealings with the whistleblower. Purpura also showed a video clip of Schiff parodying dialogue from the July 25 call during a House hearing, a dramatic embellishment that Trump and his allies say obliterates Schiff's credibility.

"We can shrug it off and say we were making light or a joke. But that was in a hearing in the United States House of Representatives discussing the removal of the president of the United States from office," Purpura said. "There are very few things, if any, that can be as grave and as serious."

Senators already allied with Trump declared the presentation a slam-dunk.

"In two hours, the White House counsel entirely shredded the case by the House managers," Sen. Joni Ernst, R-Iowa, told reporters, echoing several other Republicans who used a form of the word shred to characterize the effect of the lawyers' arguments.

But moderate Republican senators - whose votes will determine whether additional evidence is sought in the trial - did not share detailed opinions on the presentation or the possible need for witnesses.

"I think it's very likely I'll be in favor of witnesses, but I haven't made a decision finally yet and I won't until both side's opening arguments are done," Sen. Mitt Romney, R-Utah, told reporters on Capitol Hill.

"I thought for the most part, the House managers were effective, and I thought the president's attorneys this morning were very effective," Sen. Lamar Alexander, R-Tenn., told CBS News.

A handful of moderate Democratic senators - who could prove pivotal if they choose to side with Republicans - declared witnesses necessary to the process.

"I thought they did a good job in presenting the defense for the president," Sen. Joe Manchin III, D-W.Va., said. "[But] the most important thing I took away from today was they made very clear that there's not one witness that we've heard from . . . that had direct contact with the president."

Sen. Doug Jones, D-Ala., said he was "stunned" that Trump's lawyers argued at one point that cross examination is essential to due process, even as the White House bars witnesses from testifying on Trump's dealings with Ukraine.

"They American people deserve the truth. They deserve the whole truth," Jones said. "We're not getting it."

The House managers were not permitted to speak during Saturday's session - though they drew some attention around 9:50 a.m. as part of a procession transferring their 28,578-page trial record across the Capitol to the Senate.

"They don't contest the basic architecture of the scheme," Schiff said at a news conference after the presentation by Trump's lawyers. "They do not contest that the president solicited a foreign nation to interfere in our election, to help him cheat. I think they acknowledged by not even contesting this that the facts are overwhelming."

In his closing, Cipollone shifted the charges facing the president onto Democrats - a strategy often employed by Trump himself.

"It would be a completely irresponsible abuse of power to do what they're asking you do - to stop an election, to interfere in an election, and to remove the president of the United States from the ballot," he said. "Let the people decide for themselves."