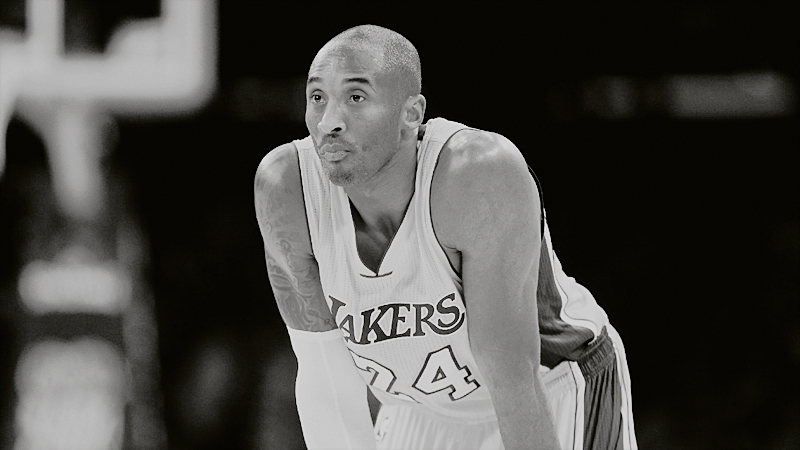 Kobe Bryant, a five-time National Basketball Association champion and global sports icon who retired in 2016 before adding an Academy Award to his considerable trophy case two years later, died Sunday in a helicopter crash northwest of Los Angeles. He was 41.

The aircraft, which also carried Bryant's 13-year-old daughter, Gianna, and seven others, crashed and burst into flames near Calabasas, California, late Sunday morning. There were no survivors. Bryant, whose home and post-NBA film and publishing offices were in the Orange County suburbs of southern Los Angeles, traveled frequently via helicopter.

Bryant's wife, Vanessa, and three other daughters were not aboard the aircraft, which was reportedly on the way to a youth basketball tournament in which Gianna, known as Gigi, would be playing.

The incident sent shock waves throughout the sports and pop culture worlds, and several NBA teams took 24- and eight-second violations during Sunday's games to commemorate Bryant's jersey numbers with the Los Angeles Lakers.

"Words can't describe the pain I'm feeling," former NBA superstar Michael Jordan said in a statement Sunday afternoon. "I loved Kobe - he was like a little brother to me. We used to talk often, and I will miss those conversations very much. He was a fierce competitor, one of the greats of the game and a creative force."

"Kobe was a legend on the court and just getting started in what would have been just as meaningful a second act," said former president Barack Obama, who along with former first lady Michelle Obama, Bryant referred to as friends in 2018. "To lose Gianna is even more heartbreaking to us as parents."

In sports and in life, Bryant was an individual whose tirelessness and competitive drive were as notable as his versatility and ambition.

Known late in his career by the nickname "Black Mamba," Bryant was one of the smoothest and most dangerous shooters in a league previously dominated by Jordan, Earvin "Magic" Johnson and Larry Bird. When those players retired or their talents faded, Bryant took up their mantle. The 6-f00t-6 shooting guard was named to the NBA's all-star team in 18 of his 20 seasons, all with the Lakers, and he twice led the league in scoring. He scored 81 points during a game in 2006, the second-highest total in a game in league history.

He and Shaquille O'Neal led the Lakers to three consecutive championships, from 2000 to 2002, though perhaps more impressive was Bryant's ability to push the Lakers back into the league's championship ranks after the departures of O'Neal and Coach Phil Jackson, who had guided Jordan's Chicago Bulls to six championships during the 1990s.

Bryant, who was one of the first players to skip college basketball and declare himself eligible for the NBA draft in 1996, modeled his game after Jordan and saw himself as the heir apparent - and occasional rival - to the former Bulls superstar.

"I was thinking in my mind: I didn't care," Bryant said in 2017 during a podcast hosted by Geno Auriemma, the 11-time national championship coach of the University of Connecticut women's basketball team. "I'm going to destroy this guy. I don't care if I'm 18; I'm coming for blood."

Indeed, Bryant's voracious competitiveness could strike some as aloofness, and his reputation as a teammate and sports role model were matters of controversy. He famously clashed with O'Neal, orchestrating the fun-loving center's trade from Los Angeles in 2004 because Bryant occasionally viewed him as lazy.

Bryant's image had already changed a year earlier, when an employee of a Colorado resort accused him of sexually assaulting her. Although charges were eventually dropped, a civil settlement was reached, and Bryant's image as a clean-cut cultural darling was tarnished.

He would spend the next decade rebuilding his image not just as a detail-oriented perfectionist but as a person obsessed with greatness and achievement overall. He became a mentor of famous young NBA players and anonymous youngsters interested in basketball's finer points. He coached Gianna's teams and would occasionally lose himself in extolling her prowess on the court, where she showed instincts and devotion that reminded him of himself.

Gianna will "be standing next to me," Bryant said during a 2018 appearance on "Jimmy Kimmel Live," "and it'll be like: 'And you gotta have a boy. You and [Vanessa] gotta have a boy; have somebody carry on the tradition, the legacy.' She's like, 'I got this.' "

There was no doubt Bryant seemed fascinated with the concept of greatness and mastering basketball's finer points. He attended Women's National Basketball Association games and frequently commented on the highly successful women's college teams at Connecticut and Notre Dame. In one of his final public appearances, Bryant and Gianna were courtside at a Lakers game in December, with Bryant appearing to intensely break down a play to his daughter.

If his commitment to fulfilling potential sometimes rubbed peers the wrong way, it also could be infectious. After the U.S. men's basketball team's disappointing bronze-medal performance in the 2004 Athens Olympics, Bryant was added to the team and quickly became a veteran leader. A noted early riser who, even as he passed his 40th birthday, would often be up by 5 a.m. for an intense workout or shooting session, he challenged Olympic teammates to join the "Breakfast Club." Bryant's group met each morning at 7 for weight training or basketball drills, and alongside fellow team leader and NBA superstar LeBron James, Team USA returned to its past dominance with gold medals in 2008 and 2012.

On Saturday, James passed Bryant on the NBA's career scoring list, and Bryant's final post to his 15 million Twitter followers was a congratulations to the 35-year-old James, who has spent the past two seasons with the Lakers.

"Continuing to move the game forward @KingJames. Much respect my brother," Mr. Bryant's tweet read, with a hashtag of James's points total when he passed Bryant: 33,644.

Between games and workouts, Bryant was an insatiable learner on and off the court. Early in his career, he picked the brains of Jordan and Hakeem Olajuwon to learn and mimic their signature basketball moves. Although Bryant had never attended college, he was nonetheless captivated by the pursuit of knowledge and lifelong improvement. He took summer school courses at UCLA after his rookie season in the NBA, and years later he invited entertainers and visionaries - Oprah Winfrey, J.K. Rowling and George R.R. Martin among them - for in-depth discussions about their crafts.

"It can seem a little obtuse, maybe, but he seemed to be interested in all of this," John Williams, the legendary film-score composer and five-time Oscar winner, said of Bryant in a 2018 interview with The Washington Post.

Although Bryant accomplished almost everything possible on the basketball court, a traditional retirement never held much appeal. A lifelong film buff who filled idle time by quoting "Star Wars," "The Big Lebowski" or a Harry Potter movie, Bryant began imagining his next career before stepping away from his first. His basketball career had made him a millionaire a few hundred times over, but his investments in the sports drink company BodyArmor and other companies that included grooming products and artificial intelligence were positioning Bryant to again follow Jordan, this time into an exclusive club of billionaires who began their careers as athletes.

Unlike Jordan, Bryant had no intention of spending his decades after basketball earning passive income. It was during a ride aboard "The Mamba Chopper," or what he called the Sikorsky S-76 helicopter he took to Lakers games, that in 2016 he conceived of an alternate world in which his stories and characters would exist. He would call that world "Granity" and would name his fledgling film studio the same.

"There are infinite possibilities," he told The Post in September 2018, and it was precisely that concept that drew him in.

During Bryant's final season with the Lakers, he wrote a poem called "Dear Basketball," or what amounted to a farewell to the game that made him a household name. He later adapted the poem into a nearly four-minute animated film, complete with a rousing score by Williams. It was one of five nominees for best animated short before the 2018 Academy Awards, and Bryant took to the stage in his victory and, in one of the four languages Bryant claimed fluency in, thanked Vanessa and his three daughters. (His fourth, Capri, was born in 2019.)

"You are my inspiration," he said first in Italian and then English before walking away with his Oscar statuette.

Kobe Bean Bryant was born in Philadelphia on Aug. 23, 1978, before spending many of his formative years in Italy. His mother, the former Pamela Cox, was a homemaker and the sister of former NBA player Chubby Cox; his father, Joe "Jellybean" Bryant, was a professional basketball player who spent most of his playing and coaching career in Europe. Both parents survived him, in addition to his wife of 18 years; three daughters, Bianka, Natalia and Capri; and two sisters.

Bryant first attracted national attention as a high school player at Lower Merion High in suburban Philadelphia, and he combined generational talent with looks and flair - his date to senior prom was R&B singer Brandy - perfectly suited for Hollywood.

Although his first name, at least according to Bryant mythology, was inspired by a visit to a high-end steak house, Yahoo Sports reported in 2016 that more than 14,000 boys had been named Kobe during Bryant's NBA career.

As a 17-year-old, he was the No. 13 pick in the 1996 NBA draft by the Charlotte Hornets, but he threatened to follow in his father's footsteps and begin his career in Italy if the Hornets retained his rights. The team traded him to the Lakers, with whom he would spend his entire career and become an immediate fan favorite by winning the 1997 slam dunk contest, beginning a sensational career and fulfilling Bryant's ambition for suiting up for an NBA team most famous for glitz, glamour and an era of glory known as "Showtime."

The journey had begun on his family's driveway in Philadelphia, where on snowy days Bryant's mother would ask him to clear the driveway. He would do so just enough to shoot hoops, sometimes putting up hundreds of shots per day as he perfected a form that would become internationally famous.

"As a six-year-old boy deeply in love with you," Mr. Bryant would write nearly two decades later in his poem "Dear Basketball," "I never saw the end of the tunnel. I only saw myself running out of one."