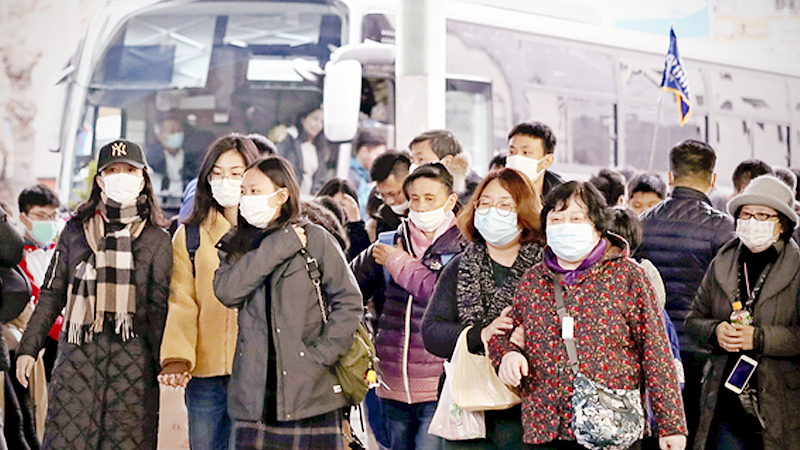 By Saki Sakamoto and Minoru Akita
The Japan News/ANN

TOKYO - The Chinese government on Monday banned its citizens from group trips abroad, in a bid to prevent the further spread of a new type of coronavirus.

The Japanese government has decided to allow Japanese residents in Wuhan, China, to return home.

Tokyo-based Kamome Tourist Co. in Shinjuku Ward has received cancellations of 480 group tours for about 20,000 tourists that were scheduled to take place as early as Monday.

“Many of our staff are coming to the office on their days off to cope with the situation, calling restaurants and shops that were included on our tours,” Yamazoe said.

A spokesperson for Prince Hotels Inc., where one-third of the foreign guests are Chinese, said, “We can’t predict the impact yet.”

J. Front Retailing Co., which owns Daimaru Matsuzakaya Department Stores Co. and other stores, is also concerned that “China’s move will have a big impact on duty-free sales,” according to a spokesperson.

Preliminary figures put 2019 spending in Japan by foreign visitors at about ¥4.81 trillion, with about 36.8% of this, or ¥1.77 trillion, spent by visitors from China. The amount spent per tourist from China was about ¥210,000, more than visitors from other Asian countries.

“The hotel and transportation industries that had prepared to receive visitors for the upcoming Tokyo Olympics and Paralympics are getting a smack in the eye in the stage where they would be recouping their investments,” said Shunsuke Kobayashi, a senior economist at Daiwa Institute of Research Ltd.

According to an estimate by Nomura Securities Co., if the number of foreign visitors to Japan declines by 10%, consumption will decline by ¥480 billion, pushing down the gross domestic product by about 0.1% a year. If Japanese people refrain from going out to avoid the risk of virus infection, domestic consumption may also decline, possibly fueling downward pressure on the Japanese economy.

According to the Japan National Tourism Organization, the number of Chinese visitors to Japan in 2019 increased 14.5% compared to the previous year to 9.59 million The online version of Chinese newspaper The Beijing News put the number of travelers on group tours at 55.24% of the total in 2018, and Monday’s ban is expected to have a significant impact on the flow of Chinese travelers.

The Japanese government aims to increase the number of foreign visitors to Japan to 40 million in 2020. A senior Japanese government official said, “It [the ban] was inevitable to prevent the spread of infection, but it’s now become difficult to achieve our goal.”