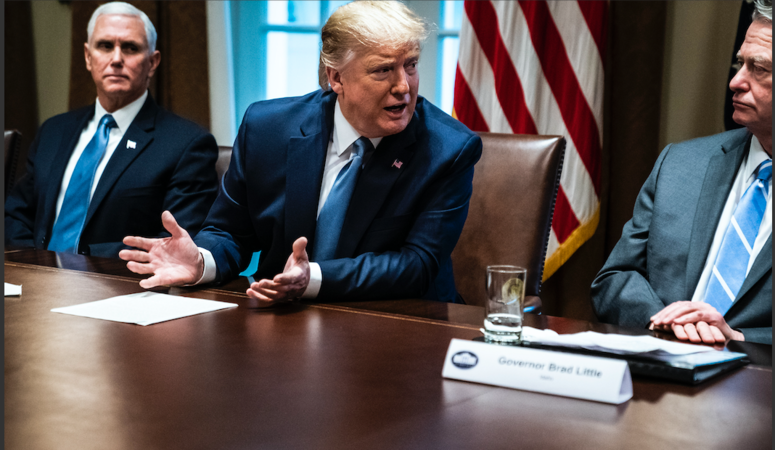 WASHINGTON - A new phase of President Donald Trump's historic impeachment trial began Wednesday, with senators posing questions to the House managers and the president's attorneys about Trump's conduct toward Ukraine.

Meanwhile, debate continues outside the chamber over whether to call witnesses, including former national security adviser John Bolton. In a closed-door meeting on Tuesday, Senate Majority Leader Mitch McConnell, R-Ky., told colleagues that he doesn't yet have the votes to block witnesses.

Trump faces charges of abuse of power and obstruction of Congress. The crux of the case for his impeachment is the allegation that he withheld military aid and a White House meeting to pressure Ukraine to investigate Joe Biden and his son. Hunter Biden served on the board of Burisma, a Ukrainian energy company, while his father was vice president. Bolton's upcoming book - which the White House has moved to rework - is said to detail the White House-Kyiv interaction.

They wanted Trump's counsel to explain how they should consider abuse of power if the president had "had more than one motive for his alleged conduct, such as the pursuit of personal political advantage, rooting out corruption and the promotion of national interests."

White House Deputy Counsel Patrick Philbin argued that if there were a motive "of the public interest, but also some personal interest," then it "cannot possibly be the basis for an impeachable offense."

He continued by arguing that as soon as there's any evidence of public interest motive, the case fails, because every politician is going to have some personal political interest in mind.

"All elected officials to some extent have in mind how their conduct, how their decisions, their policy decisions will affect the next election. There's always some personal interest in the electoral outcome of policy," Philbin said.

Earlier Wednesday, Romney told reporters what he wanted to hear from witnesses, such as Bolton.

"For instance, I'd like to know at the time the president decided not to immediately provide military aid to Ukraine, what was the reason he explained at that point," Romney said. "In addition, I'd like to know a little later on, was there any effort on the part of the president to communicate to Ukraine that aid was being held up and for what reason. Or was that something they just learned from the media?"

He continued: "So these are questions that would relate to important issues that I'd like to get the answers to."

In a follow-up to Philbin's initial argument, Senate Minority Leader Chuck Schumer, D-N.Y. submitted a question about witnesses, asking House managers if there is "any way to render a verdict in this case" without hearing from Bolton, acting White House chief of staff Mick Mulvaney and others.

Rep. Adam Schiff, D-Calif., the lead House impeachment manager, said the "short answer to that question is: No."

"There's no way to have a fair trial without witnesses, and when you have a witness who is as plainly relevant as John Bolton, who goes to the heart of the most serious and egregious of the president's misconduct, who has volunteered to come and testify - to turn him away, to look the other way, I think is deeply at odds with being an impartial juror," Schiff said.

Philbin fielded the third question, which invited Trump's team to respond to whatever the House managers just said.

"It's not just a question of, 'Well, should we just hear one witness?' That's not what the real question is going to be," he said. "For this institution, the question is: What is the precedent that is going to be set for what is the acceptable way for the House of Representatives to bring an impeachment of a president of the United States to this chamber, and can it be done in a hurried, half-baked partisan fashion?"

Constitutional law professor Alan Dershowitz, a member of Trump's defense team, said before the Senate convened Wednesday that there should not be witnesses in the impeachment trial.

Dershowitz told reporters that his view on witnesses flows from the larger argument he advanced earlier in the trial - which has been embraced by a number of GOP senators - that the allegations against Trump do not constitute impeachable offenses.

"If there's no impeachable charges, then it follows that you don't have witnesses," Dershowitz said. "It would be as if somebody were indicted for something that weren't a crime. You don't call witnesses, you get it dismissed."

Dershowitz said he hopes to expand on that point in the question-and-answer period the Senate embarked on Wednesday.

Dershowitz also said that his constitutional view is that, "if there are witnesses on one side there have to be witnesses on the other."

Sen. Joe Manchin, D-W.Va., told MSNBC on Wednesday that Hunter Biden is a relevant witness, a view at odds with fellow Democrats.

"You know, I think so. I really do," Manchin said during an appearance on MSNBC. "I don't have a problem there because this is why we are where we are. Now I think that he can clear himself, what I know and what I've heard. But being afraid to put anybody that might have pertinent information is wrong no matter if you're a Democrat or a Republican."

Other Democrats have argued that Hunter Biden has no direct knowledge of Trump's conduct toward Ukraine and that his appearance would be designed to hurt his father politically as he seeks the presidency.

In the first question requesting an answer from both the House managers and Trump's legal team, Sens. John Kennedy, R-La., John Cornyn, R-Tex., and Marsha Blackburn, R-Tenn., asked both sides why the House did not challenge claims of executive privilege and immunity during the impeachment proceedings.

Speaking for the managers, Rep. Hakeem Jeffries, D-N.Y., said Trump never raised the question of executive privilege and instead relied on a "notion of blanket defiance" or "absolute immunity" without case law or jurisprudence cited to justify it.

Philbin said Trump had "specific rationales" for defying subpoenas and other requests from House investigators. Philbin denied that the president engaged in "blanket defiance."

Also on Wednesday, House Foreign Affairs Committee Chairman Eliot Engel, D-N.Y., said Bolton told him to look into the removal of former ambassador to Ukraine Marie Yovanovitch during a phone conversation less than a week after Bolton's departure from the White House.

In a statement, Engel described the conversation publicly for the first time, saying it shows the importance of calling Bolton as a witness during the Senate trial.

Engel also said his phone conversation with Bolton directly contradicts Trump's claim that Bolton did not say anything about the "Trump-Ukraine scandal" at the time he was fired. Yovanovitch's removal is a pivotal event in the story of Trump's unconventional foreign policy toward Ukraine and was considered a victory by his personal attorney Rudy Giuliani.

Engel said he alerted colleagues on the Foreign Affairs, Intelligence and Oversight panels that led the House inquiry into Trump's dealings with Ukraine and that Bolton's remark was "one of the reasons we wished to hear from [him], under oath, in a formal setting."

"Ambassador Bolton has made clear over the last few months that he has more to say on this issue. And now that the President has called his credibility into question, it's important to set the record straight," Engel said, urging the Senate to call Bolton as a witness.

The White House moved last week to block the publication of a book from Bolton, saying it contained "TOP SECRET" and classified material that would endanger national security.

The Jan. 23 letter to Charles Cooper, Bolton's lawyer, said that Bolton's book contained "significant amounts of classified information" and that Bolton would be breaking his non-disclosure agreement if he published the book.

Several days later, The New York Times reported some of the most explosive aspects of Bolton's book, including his allegations that Trump told him in August that he was tying Ukrainian investigations to foreign aid.

Ellen Knight, the senior director for records, access and information security management, said the administration would work with Bolton to "revise the manuscript" so he can "tell his story in a manner that protects U.S. national security."

The letter indicates that Knight and Cooper had also spoken on the telephone the day before.

"The manuscript may not be published or otherwise disclosed without the deletion of this classified information," it said.

Trump referenced the trial as he recognized Republican senators attending a White House signing ceremony for the new U.S.-Mexico-Canada trade agreement that will replace the North American Free Trade Agreement.

"Maybe I'm being just nice to them because I want their vote," Trump said as he rattled off the names of senators attending the event on the South Lawn. "Does that make sense? I don't want to leave anybody out."

He gestured toward a member of the House and noted that Republicans had already voted unanimously against his impeachment.

"I think I have to mention some senators who are here," Trump said.

Democrats were conspicuously absent from the ceremony.