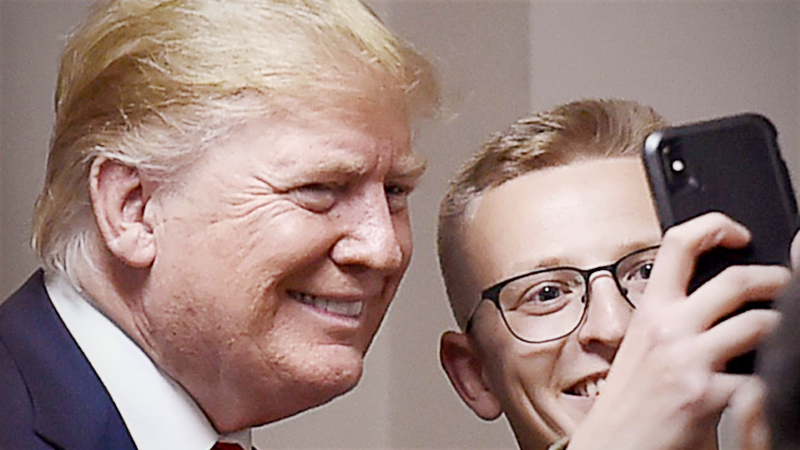 In 2012, he told CNBC that the Foreign Corrupt Practices Act was a "horrible law." In a 2017 Oval Office meeting, Trump ordered his then-Secretary of State Rex Tillerson to do away with it. "It's just so unfair that American companies aren't allowed to pay bribes to get business overseas," Trump said, according to "A Very Stable Genius," a book by Washington Post reporters Philip Rucker and Carol D. Leonnig published last month.

White House economic adviser Larry Kudlow said recently that the Trump administration is "looking at" making changes to the global anti-bribery law. "We have heard some complaints from our companies," he told reporters.

The Justice Department continues to levy and collect hefty fines, including a record $3.9 billion penalty against European aerospace giant Airbus announced Friday by American, French and British authorities. "Airbus engaged in a multi-year and massive scheme to corruptly enhance its business interests by paying bribes in China and other countries and concealing those bribes," Assistant Attorney General Brian Benczkowski of the Justice Department's Criminal Division said in a statement.

It's too early to tell if the decline in cases being initiated is part of a long-term trend, said Kristen Savelle, the managing director of the Rock Center for Corporate Governance at Stanford University. But "if the decline in new cases continues" it could result in fewer prosecutions later, she said.

Despite the president's apparent antipathy towards the Foreign Corrupt Practices Act, or FCPA, the Justice Department says it is setting prosecution records, particularly in cases against individuals. Last year, 34 individuals were charged in FCPA-related crimes compared with 24 in 2017, according to department data.

These cases are "not an outlier or a statistical anomaly. Rather, it is part of the department's continued dedication to holding individual wrongdoers accountable across the board," Benczkowski said at a conference last month.

"With these numbers in mind, it is fair to say that reports of the death of white collar enforcement at the department are grossly exaggerated," Benczkowski said, citing the number of criminal cases the department has pursued.

In December, Ericsson, a Swedish telecommunications company, agreed to pay $1 billion in penalties after admitting to paying bribes over 17 years - one of the largest anti-bribery fines ever paid. The SEC fined Deutsche Bank $16 million last year for violating the law by hiring relatives of government officials to win business. The "referral hires" were often not qualified but bypassed the bank's traditional hiring process, according to court documents.

And former Goldman Sachs banker Tim Leissner is scheduled to be sentenced in June after admitting to bribing foreign officials to win business for the bank in Malaysia. Goldman Sachs is in discussions with federal authorities to settle claims about its role in the scandal.

Corporate anti-bribery investigations typically take years to complete and most of those closed recently were initiated under the Obama administration, said Savelle.

When the Department of Justice, for example, closed one of the highest profile corporate bribery investigations in recent memory last year, reaching a $282 million settlement with Walmart, it came at the end of a seven-year investigation. The country's largest retailer settled charges it ignored internal corruption for years as it expanded aggressively overseas.

The Foreign Corrupt Practices Act was largely dormant for decades after its passage in 1977 with very few prosecutions until then-President George W. Bush began using the anti-bribery statute to propel the country's moral authority across the globe, legal experts say. It led to a global shift in attitudes about bribery with the United States as the leading voice, said Andy Spalding, a professor at the University of Richmond School of Law and a senior editor of the FCPA Blog.

"A Republican administration dusted off the law and gave it some teeth," Spalding said.

But the law has been criticized by those who say it gives foreign competitors an advantage.

In a 2011 paper, Jay Clayton, chair of the Securities and Exchange Commission said, the United States' anti-bribery policies were "causing lasting harm to the competitiveness of U.S. regulated companies and the U.S. capital markets." Trump nominated Clayton to chair the SEC in 2017.

Last September, he told the Economic Club of New York: "We must face the fact that, in many areas of the world, our work may not be having the desired effect. . . . Many other countries, including those that have long had similar offshore anti-corruption laws on their books, do not enforce those laws."

A few months into his presidency, Trump signed a bill canceling an SEC regulation, adopted during the previous administration, that would have required oil and gas and mining companies to disclose in detail the payments they make to foreign governments in a bid to boost transparency in resource-rich countries.

The Justice Department has also made some improvements to the way it enforces the anti-bribery statute, including giving corporations credit for having corporate compliance programs in place, said Harold Kim, president of the U.S. Chamber of Commerce's Institute for Legal Reform. "We're all against corruption but how can this all work better?" Kim said.

Congress should discuss ways to focus prosecutions not just on companies paying bribes but on foreign officials soliciting them, Kim said. The law should be modernized to better define who counts as a foreign official and whether a company can be held liable for misdeeds of a corporation it acquires, he said.

The Trump administration also appears to be more focused on prosecuting foreign companies accused of bribery, said Savelle. Over the last decade, U.S.-based firms have been the target of twice as many FCPA-related sanctions as foreign ones, according to the Stanford data. But among the ongoing cases, the breakdown is nearly even split, she said. (Friday's Airbus case adds to the total of foreign companies targeted by DOJ.)

"It may be an intentional effort to level the playing field by going after more foreign companies," Savelle said.