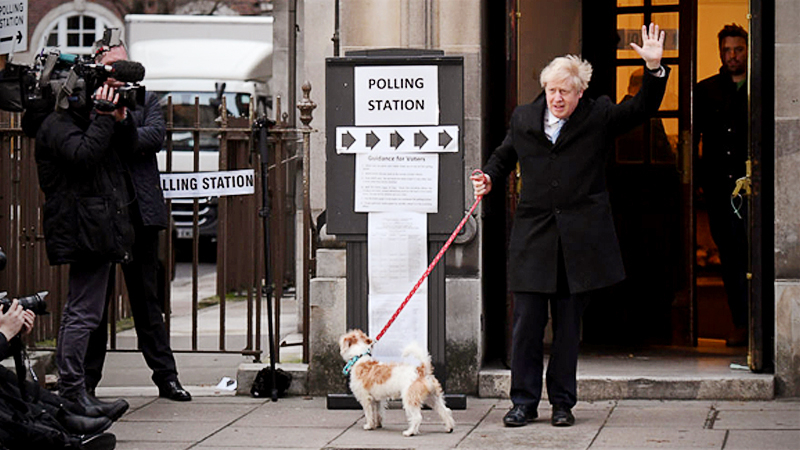 The United Kingdom will hold a major international climate summit in Glasgow in November - considered the most significant gathering of world leaders since the 2015 climate meeting in Paris - and Britain is keen to strengthen its claim to leadership in the area, especially as it prepares for its place on the world stage post-Brexit.

Johnson officially began COP26, as the climate talks are known, at London's Science Museum on Tuesday. Appearing alongside revered British naturalist David Attenborough, the prime minister declared that Britain, as the "first country to industrialize," has a "responsibility to lead the way."

Johnson urged other countries to match Britain's pledge - made by his predecessor Theresa May last year - to cut greenhouse gas emissions to net zero by 2050. He also announced that Britain will ban new gas, diesel and hybrid cars by 2035, cutting the current target of 2040 by five years. Other countries, such as Germany, Ireland and the Netherlands, are banning fossil fuel vehicles by 2030.

Britain's car industry questioned whether the goal is achievable. Climate campaigners said the target is not ambitious enough.

Johnson came under broader criticism from Claire O'Neill, a former energy minister who was heading up the climate conference until Johnson's government fired her last week.

O'Neill hit back Tuesday, saying better leadership is needed from the top. She told the BBC that although Johnson has made "incredibly warm statements about this over the years, he's also admitted to me that he doesn't really understand it." She added that the prime minister "doesn't really get it, but others around him do."

In a scathing letter to Johnson published by the Financial Times, O'Neill said that she wasn't given enough resources to do the job and that Britain's plans for the summit were "miles off track" from where they needed to be.

By all accounts, those spearheading the annual U.N. climate conference this fall face a daunting assignment: Convincing nations around the world to show up with bold new promises to cut their carbon emissions rapidly in the years ahead.

The prospects for that actually happening seem, at best, uncertain.

Already, more than 100 countries have vowed to submit more ambitious plans to fight climate change by the end of the year. But collectively, they represent only about 15% of global emissions. That means big emitters, for the moment, largely have remained on the sidelines.

The most recent global climate gathering last December was supposed to lay the groundwork for countries to lock in aggressive new pledges this fall. But instead, the summit ended largely in disarray and disappointment.

After two weeks of intense negotiations, punctuated by raucous public protests and constant reminders of a need to move faster, negotiators in Madrid patched together a lackluster compromise that failed to achieve their own goals of moving closer to meaningful action to combat climate change.

"We are not satisfied," Chilean Environment Minister Carolina Schmidt, who chaired the conference, said at its conclusion after all-night negotiations limped to a close. "The agreements reached by the parties are not enough."

In the meantime, the world is falling short of where it would need to be to meet the goals of the Paris agreement.

Global greenhouse gas emissions once again hit a record high in 2019, even as they fell slightly in the United States due to the continued shift away from coal. The U.N. also warned last fall that global temperatures are on pace to rise as much as 3.2 degrees Celsius (5.8 Fahrenheit) by 2100, and that emissions must begin to fall by 7.6% each year beginning in 2020 to meet the Paris accord's most ambitious aims.

So far, that kind of change remains nowhere in sight.

"The world's governments must stop treating climate change as a marginal issue, and put it at the center of economic policy, global diplomacy and international relations," said Nat Keohane, who oversees the climate program at the advocacy group Environmental Defense Fund. "As the COP26 president, the U.K. has the opportunity and the responsibility to take the first step in that direction.

Climate campaigners are watching the Johnson government to see if it backs up announcements with actual delivery plans. In the lead-up to the December general election, Johnson did not impress climate activists when he did not show up for a televised leadership debate about climate change. (The broadcaster put a melting ice sculpture in his spot.)

Doug Parr, Greenpeace's chief scientist for Britain, said the country needs to "lead by example," adding: "It can proselytize about net-zero dates and coal phaseout dates - that's all good. But we also need a credible delivery plan and strategy to bring people on board."