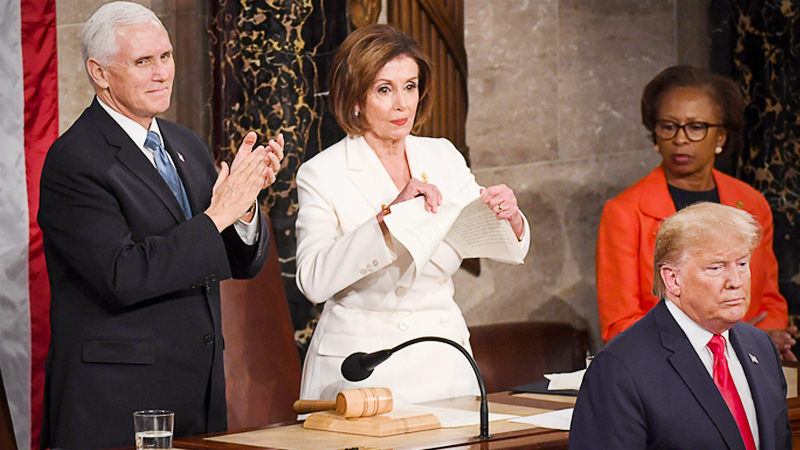 WASHINGTON - From the brilliant white suitcoat to the carefully assembled guest list to the health-care-focused talking points, House Speaker Nancy Pelosi sought on Tuesday to stick closely to the script she used a year ago, when she last hosted President Donald Trump in the House chamber.

She stuck to it until the very end of Trump's third State of the Union address - when she stood up, picked up her copy of the speech and tore it neatly in half.

It was a dramatic gesture, caught on camera, that encapsulated a tumultuous year in the relationship between the speaker and the president.

Last Feb. 4, Pelosi, D-Calif., sat before the nation in triumph. Not only had Democrats retaken the House just months before, they had emerged victorious from a record-long federal shutdown - and through the standoff, Pelosi had cemented her leadership of a fractious party.

The mood of the moment was captured in a single image: A coyly smiling Pelosi clapping sideways at Trump, as if stifling a snicker.

This Feb. 4, however, the initial gesture of dominance belonged to Trump: As the president ascended the rostrum, he handed a copy of his speech to Pelosi, barely making eye contact. Pelosi extended her hand; if Trump saw it, he did not react. Leaving after the speech, Trump did not even turn in Pelosi's direction.

The tables, after all, had turned. Trump arrived at Capitol less than 24 hours before a what was expected to be a historic acquittal on impeachment charges - an outcome that Democrats warned would unleash a monarchic president. A Gallup poll released Tuesday found his approval rating at a record-high 49%. And Pelosi's party was mired in recriminations and embarrassment after a disastrous delay in reporting the first voter results of the 2020 campaign.

Explaining her decision to tear up the speech, Pelosi told reporters, "It was the courteous thing to do considering the alternative."

Later, the White House's official Twitter account accused her of ripping up a list of touching moments from the speech, including recognition of a surviving Tuskegee Airman who was present in the chamber. "That's her legacy."

Earlier in the day, Pelosi had telegraphed that she had no interest in being part of any story outside of the Democrats' poll-tested, focus-group-approved safe space - highlighting the Trump administration's attacks on the Affordable Care Act and Medicaid.

She fended off reporters' questions about the Iowa debacle and the looming acquittal. Pelosi then joined her fellow House Democratic women, all wearing suffragist white. They reprised a group photo they had taken the year before.

The pose was the same, but the mood was different.

Once the speech began, the atmosphere grew more tense - and the anger could be read on Pelosi's face.

What began as a placid smile became a grimace as Trump worked his way through remarks that alternately touted his achievements, slammed his Democratic predecessor and called for hard-line policies that infuriated Pelosi's caucus.

The speaker stood on occasion - to welcome Venezuelan opposition leader Juan Guaidó, to praise a bipartisan expansion of paid family leave for federal employees, for rural broadband Internet - but her dismay was more often on display.

When Trump claimed he would protect health insurance coverage for preexisting conditions, Pelosi shook her head - hours after calling on Trump to drop his support for a federal lawsuit that would eliminate those very protections. When Trump went on to pledge that he would "always protect your Medicare and always protect your Social Security," she shook her head again.

When Trump announced that Janiyah Davis, a Philadelphia fourth-grader, would receive a school voucher, she stayed seated - inspecting the speech she would later shred.

Ahead of the speech, some acknowledged that the swagger Democrats had felt a year ago - which Pelosi had embraced in the months after her party's midterm victory - has given way to a more reflective posture.

"I think history will probably judge us in a positive light," said Rep. Daniel Kildee, D-Mich. "There's a permanent, indelible mark on this presidency for good reason."

As far back as March, Pelosi had warned that impeachment had to be for "something so compelling and overwhelming and bipartisan." Republicans repeatedly read those words back to Democrats as Trump's party held its ranks together - even as the facts grew so damning that several GOP lawmakers publicly conceded Trump's alleged efforts to solicit investigations of his political enemies from a foreign power by withholding military aid and a coveted meeting were wrong, though not impeachable.

While some griped about a tactical misstep here and there, few Democrats have openly criticized Pelosi's decision to pursue impeachment. One who did, Rep. Jeff Van Drew of New Jersey, left for the GOP in December. He could be found on the center aisle Tuesday, seeking out Trump as he entered the chamber.

In recent public appearances, Pelosi has come to terms with her decision to move forward with impeachment more bluntly: Trump, she has said repeatedly, is "impeached forever."

"No matter what the Senate does, it can never be erased," she said in an HBO interview last month.

Republicans are hoping the impending acquittal proves to be an inflection point, a moment where their currently dim prospects of retaking the House majority - and unseating Pelosi - begin to reverse.

"It is really clear to me that the American people are going to look at that and say, we just can't trust the Democrats with power," said Rep. Liz Cheney, R-Wyo., the Republican Conference chairwoman. "I mean, I'm sure she's trying to make a hard pivot away from impeachment."

While Pelosi spent much of Tuesday aiming to send a message of cooperation, not combat, some of her closest allies doubted whether that was even possible.