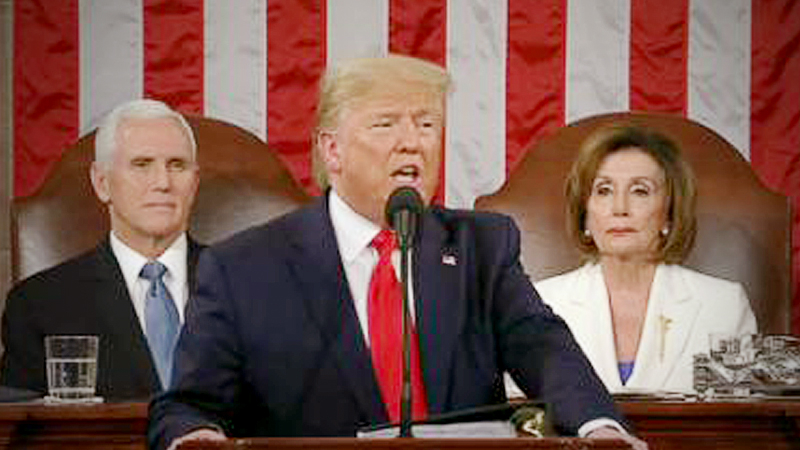 President Donald Trump delivered his third annual address to Congress on Tuesday night at a key juncture in his presidency: It came on the eve of his likely acquittal in the impeachment trial, the 2020 Democratic nominating process saw its first results mere hours before the speech, and Trump's poll numbers have taken a turn for the better in recent weeks.

Here are some takeaways from the speech.

You wouldn't know from Trump's speech that he was about to wrap up his Senate impeachment trial - he didn't mention "impeachment" once - but that didn't mean it didn't loom over the proceedings.

Indeed, the speech began by Trump opting not to shake House Speaker Nancy Pelosi's hand. Trump simply handed her a copy of his speech, as presidents do, and turned around.

Pelosi, D-Calif., offered, but Trump didn't go for it.

The raw feelings were also on display throughout the speech as Democrats expressed dissent when Trump made over-the-top claims or criticized them.

There was even a brief protest by Democrats. When Trump mentioned lowering prescription drug costs, they stood and chanted "HR-3," putting three fingers in the air. Senate Majority Leader Mitch McConnell, R-Ky., has declined to take up a House-passed bill on that topic.

Pelosi concluded the scene by demonstrably ripping up Trump's speech as he left the podium.

There is no question that the U.S. economy is strong and is a feather in Trump's cap as he builds a reelection campaign. But in his speech Tuesday, Trump offered plenty of trademark hyperbole - and false claims.

"The years of economic decay are over," Trump said toward the beginning of his remarks, saying he "moved rapidly to revive the economy."

"In just three short years, we have shattered the mentality of American decline, and we have rejected the downsizing of America's destiny," he said. "We are moving forward at a pace that was unimaginable just a short time ago, and we are never ever going back."

To hear that, you'd think Trump had arrested the backward momentum of his predecessor, rather than - in large part - continuing the progress and slightly bettering it. Gross Domestic Product growth has ticked over 3% in a few quarters on Trump's watch, but otherwise it has been about 2% for most of his presidency - right where it was in the final years of Barack Obama's. It's been about 2% over the past three quarters, in fact - far shy of the 4, 5 and even 6% Trump has floated.

As with Trump's repeated comparisons of his record in three years versus Obama's in eight, this is in large part because of the recession that Obama inherited. Job growth under Obama in his final years was about where it's been under Trump.

Trump has a good story to tell on the economy - and creating jobs when you're at or near full employment would be a great point to make - but he insists on apples-to-oranges comparisons and pretending the economy he inherited was in some kind of free fall, which just wasn't the case.

Trump entered the House chamber to a raucous welcome by the Republicans in the crowd who just fought off his removal from office, including chants of "four more years."

And the speech, perhaps not surprisingly given the man and the context, quickly took on the feel of a campaign rally. But as with some of the above quotes, you could be forgiven for thinking he was running against Obama, rather than Sen. Bernie Sanders, I-Vt., former vice president Joe Biden or Sen. Elizabeth Warren, D-Mass.

"If we hadn't reversed the failed economic policies of the previous administration, the world would not now be witnessing this great economic success," Trump said.

And: "If we had not reversed the failed economic policies of the previous administration, the world would not now be witness to America's great economic success."

That latter claim is factually incorrect; about 4.2 million people have stopped receiving food stamps since February 2017, according to the latest data - not 7 million.

That aside, this is how Trump talks up his progress. And some of the comments seemed geared toward Trump's long-running campaign to use Obama as a foil rather than simply making a favorable comparison with him - or making 2020 Democrats his foil.

Trump chose to include an unusual moment in his speech - and one rather clearly designed to elicit a reaction.

Nearly an hour into the speech, Trump recognized conservative radio host Rush Limbaugh, who was seated next to first lady Melania Trump. He then announced that he was awarding Limbaugh the Presidential Medal of Freedom - on the spot. The first lady put it around Limbaugh's neck right then and there.

Limbaugh announced this week that he has been diagnosed with advanced lung cancer. His opponents this week have been balancing their distaste for Limbaugh's political with their regard for his humanity. Trump seemed to invite the conversation to go even further with the highly unorthodox awarding of the highest civilian honor.