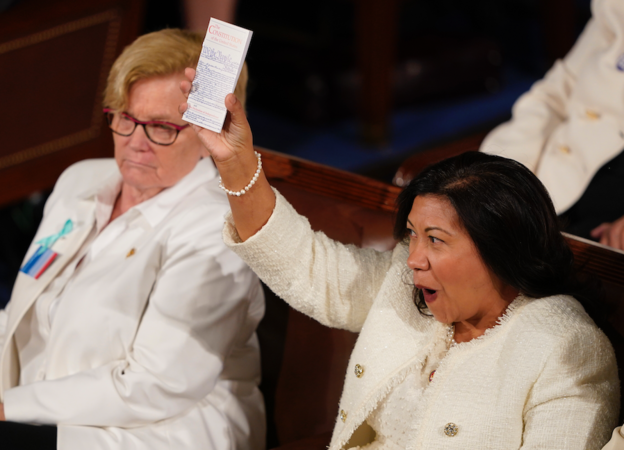 Rep. Veronica Escobar, D-Texas, holds the Constitution during the State of the Union address on Tuesday, Feb. 4, 2020. MUST CREDIT: Washington Post photo by Jabin Botsford

WASHINGTON - Like a premature cast party, President Donald Trump and many of the 535 members of Congress focused on his impeachment got together in the House of Representatives chamber Tuesday night for the State of the Union address, one day before the Senate will vote on whether to kick him out of office.

It was elegant and weird, this bipartisan gathering of two parties irreconcilably split over Trump's fate, come to the Capitol to stand for him and clap for him and listen to his teleprompted musings on the state of the nation. The exterior of the House end of the building happened to be covered in plastic tarp and scaffolding for repairs, lending the affair a sort of quarantine vibe as the members and their guests filed in for the evening. 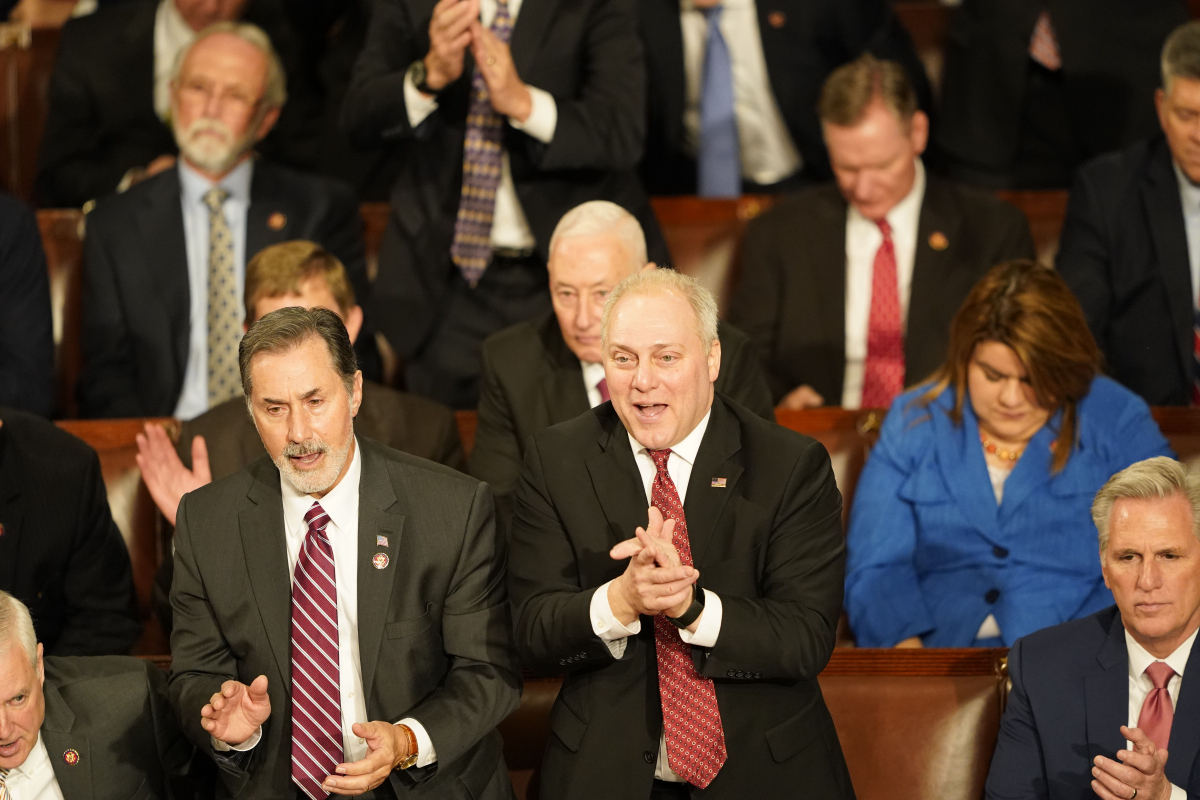 "My Democratic colleagues, they sat on their hands last time, even when there wasn't an impeachment," said Rep. Mark Meadows, R-N.C., posing for photos beside a sculpture of Will Rogers outside Statuary Hall. "They'll sit on their hands this time, in spite of impeachment."

A few paces away, Democratic members filtered out of the office of House Speaker Nancy Pelosi, D-Calif., and wandered the Capitol, waiting for a man many of them loathe. More than half a dozen members of Congress, including Rep. Alexandria Ocasio-Cortez, D-N.Y., refused to attend. Rep. Ayanna Pressley, D-Mass., boycotted the speech, too, but still made an appearance at the pre-gathering, striding through the corridors in suffragette white, which many other Democrats also wore, and a naturally bald scalp.

"You are beautiful and amazing," a man called to her from the top of a stairwell.

None of the three senators running for the Democratic presidential nomination showed up, having jetted back to the campaign trail - though they might be back in Washington on Wednesday, when the Senate is expected to acquit Trump of abuse of power and obstruction. Rep. Ilhan Omar - a Somalia-born Democrat from Minnesota whom Trump said last year should "go back" to where she came from - sat near the back of the chamber as the president's entourage filed in at 9 p.m.

"My presence tonight is resistance," she wrote in a tweet before the event.

As Trump arrived at the podium and handed his speech to Pelosi and Pence, the speaker reached out her hand to shake the president's, and he did not reciprocate, though whether it was an intentional snub is unclear (he didn't shake Pence's either).

Trump's previous annual addresses were relatively anodyne things: forward-looking, poetic, a world away from the typo-riddled, all-caps rage that constitutes his daily public addresses on Twitter. Republicans had been fretting that he would not restrain himself this time - in the same chamber whose occupants impeached him weeks earlier. But Trump, like the impeached Bill Clinton before him, made no mention of the fact. He strode into the chamber directly past Chief Justice John Roberts, who is presiding over his trial, and launched into the same themeless checklist of alleged accomplishments and airy promises that presidents have been soothing the nation with for decades.

"America's enemies are on the run, America's fortunes are on the rise and America's future is blazing bright," Trump began, leaving unspecific which enemies he meant as Democrats stared and Republicans cheered.

His speech started tinny and raspy - at least so it seemed from the upper balconies - but Trump found his volume and cadence as he proceeded through the highlights of his presidency and took veiled swipes at his opponents. "Socialism destroys nations," he said. Omar spat something into a napkin.

A few parts of the speech brought the room together in applause: when Trump praised an eighth-grade aspiring astronaut, and a 100-year-old Tuskegee Airman. When the president called out the conservative radio host Rush Limbaugh in the balcony, and first lady Melania Trump hung a Medal of Freedom on his neck, an "Oh no!" floated from the Democratic side of the chamber at the same time as a Republican shouted "Thank you, Rush!"

It went like that for more than an hour - lines to thrill Republicans and leave Democrats groaning or clapping limply in their seats. Omar left her chair before the speech ended, and several Democratic members flipped through their phones as Trump recounted "the night that United States Special Forces operators ended [Islamic State leader Abu Bakr] al-Baghdadi's miserable life."

Left unmentioned but inferred from the members' body language, the Democrats' glares and Republicans' riotous cheers of "four more years" was the morning after the party - when a large fraction of Trump's audience would take their seats at the opposite end of the Capitol and weigh judgment on the state of a president.

Pelosi tore up her printed version of the speech as it ended. Rep. Adam Schiff, D-Calif., the lead impeachment prosecutor, was one of the last to leave the chamber. He lingered in the empty rows long after the president and his Cabinet and Republican loyalists filed out, reading something on his phone, his mind perhaps on other business.

Tags:
State of the Union Congress