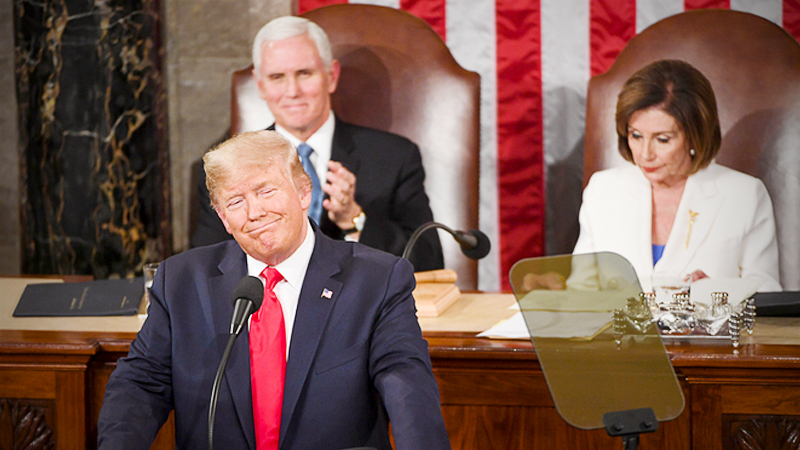 WASHINGTON - President Donald Trump on Tuesday made a theatrical prime-time appeal for the success of his divisive and turbulent stewardship after three years, projecting confidence that a strong economy and a reset of U.S. standing in the world has put the nation on the right path despite the historic impeachment that has marred his term.

In his third State of the Union address - and final one before voters will cast their verdict on his presidency this fall - Trump made no mention of the impeachment battle that has consumed him for months, even as he faced down his Democratic adversaries in the House chamber where they had voted to charge him with abuse of power and obstruction of Congress less than two months ago. 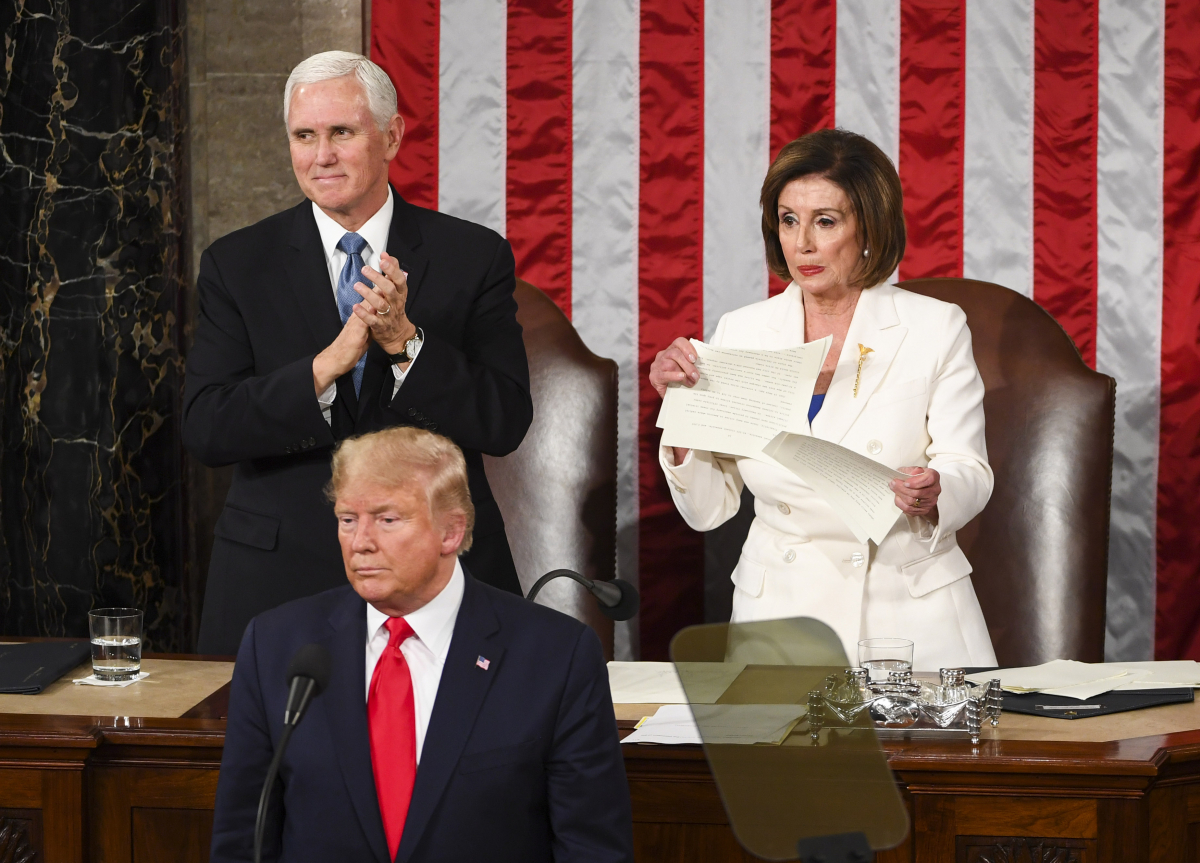 But Washington's poisonous political atmosphere was palpable throughout the evening. Several prominent Democrats, including Rep. Alexandria Ocasio-Cortez of New York, chose to boycott the address, and a handful of others walked out as the president was speaking. As Trump basked in applause after concluding his 77-minute speech, House Speaker Nancy Pelosi, D-Calif., standing behind him on the dais, tore up a printed copy of the remarks in four separate piles. 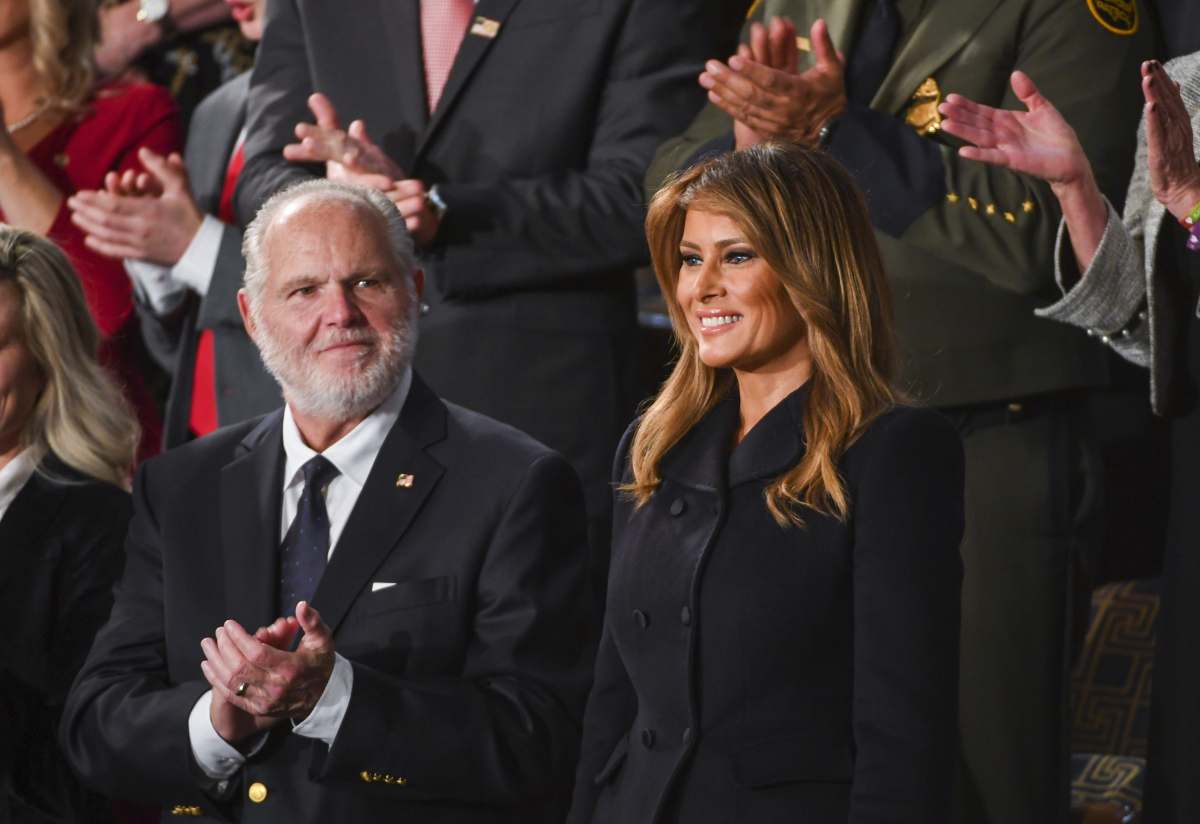 Though Trump avoided the kind of personal attacks and inflammatory rhetoric that have defined his fierce fight for political survival on impeachment, his speech was laced with inaccuracies and heightened partisanship as he offered an implicit argument that Americans have prospered and would be foolhardy to remove him from office. 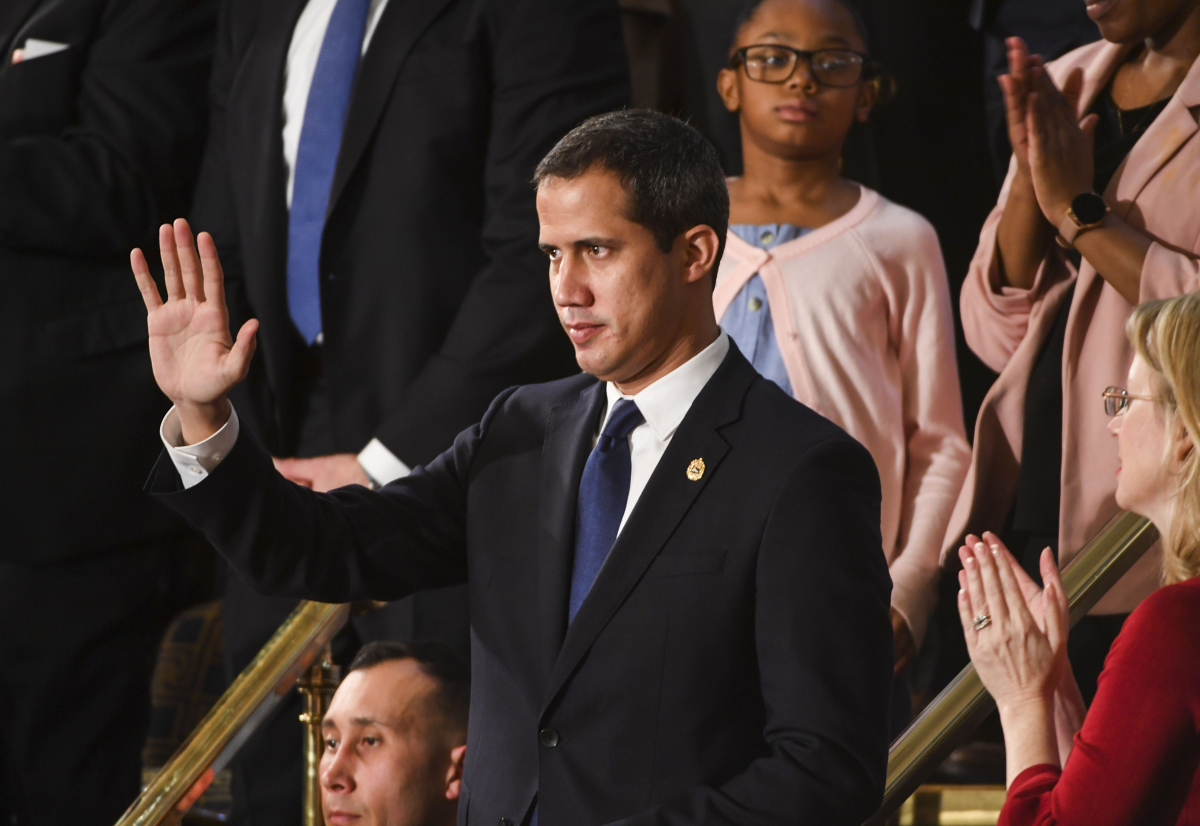 "In just three short years, we have shattered the mentality of American decline, and we have rejected the downsizing of America's destiny," Trump said. "We are moving forward at a pace that was unimaginable just a short time ago, and we are never going back." 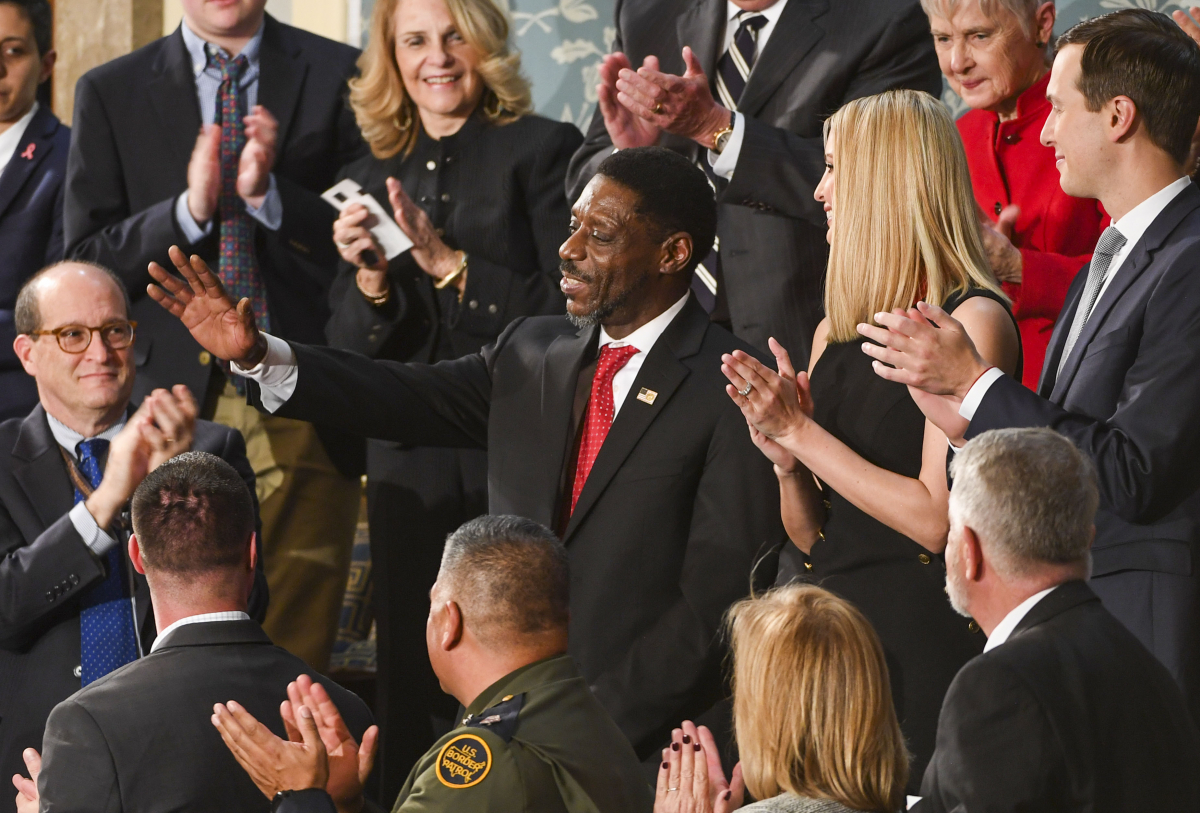 Aides said the theme of the speech was "The Great American Comeback," which could be read as an allusion to Trump's own political fortunes. 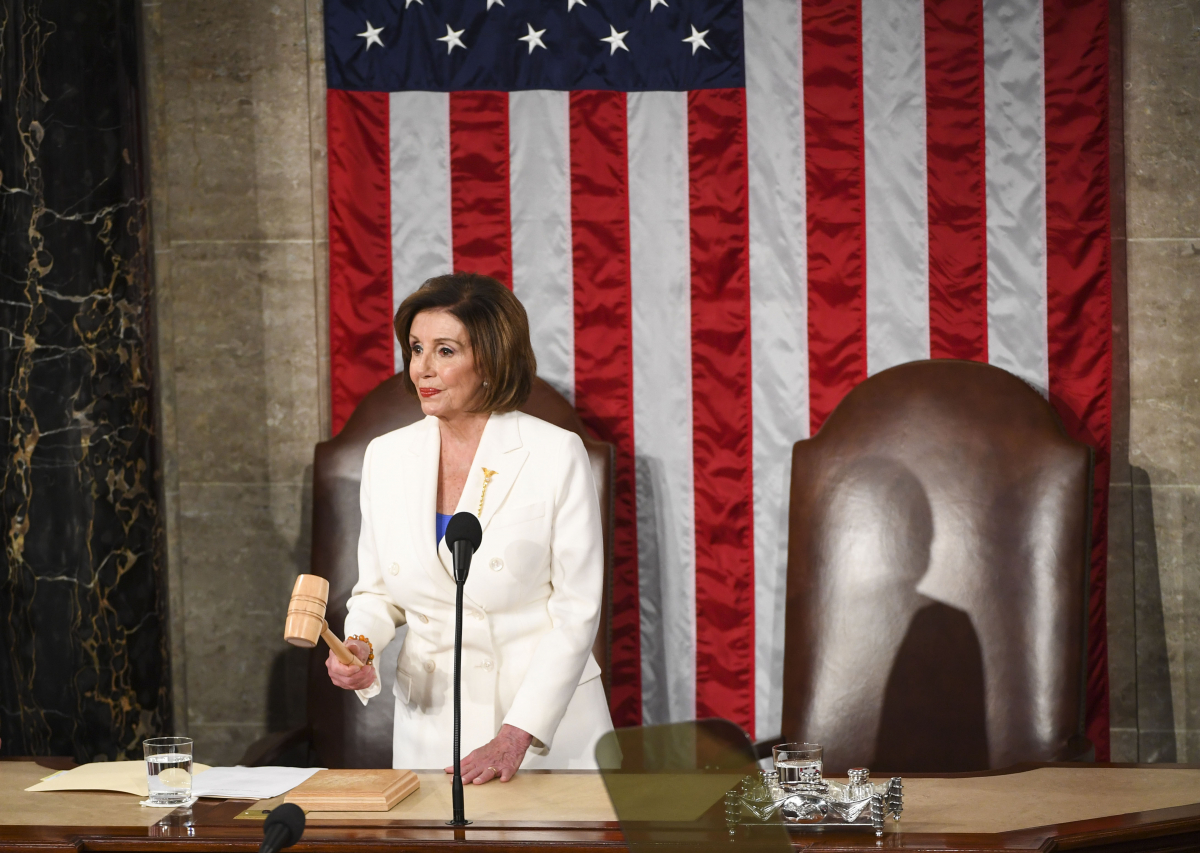 Trump took the dais buoyed by a poll showing a 49% job approval rating, his strongest since taking office, and radiating a sense of vindication that the Republican-controlled Senate is expected to vote Wednesday to acquit him of the House articles that he abused his powers and sought to obstruct Congress.

Wearing his trademark solid-red tie and a dark-blue suit, the president entered the chamber just after 9 p.m. and took his place at the dais in front of Vice President Mike Pence and Pelosi, who along with dozens of Democratic women was dressed in white, the color of the suffragist movement.

As Trump handed them printed copies of his remarks, Pelosi offered her hand to shake, but Trump did not reciprocate, and Pelosi awkwardly withdrew it. It was not clear whether the president had seen her gesture, but the lack of coordination seemed appropriate: The nation's two most powerful political leaders reportedly have not spoken in four months, since Pelosi confronted Trump during a White House meeting on Syria and stormed out with other Democratic leaders.

The president, who had railed on Twitter earlier in the day against "phony Witch Hunts and Hoaxes," sought to convince the public that he had made good on his promises to improve the economy, tighten border controls, toughen the nation's image abroad and disrupt establishment Washington.

In doing so, Trump sought to portray his presidency as a success for more than his hardcore conservative base, on which he has focused extensively for three years. Though he has consistently sown and exploited divisions along lines of race, ethnicity and gender, the president peppered his remarks with nods to prosperity among minority groups and women. His guests seated in first lady Melania Trump's viewing box featured broad diversity.

"The vision I will lay out this evening demonstrates how we are building the world's most prosperous and inclusive society," said Trump, who has attacked African American lawmakers and sports stars and demonized undocumented immigrants, "one where every citizen can join in America's unparalleled success, and where every community can take part in America's extraordinary rise."

And the former reality television star produced moments of pronounced theatrics, including having the first lady drape the presidential Medal of Freedom around the neck of conservative talk show host Rush Limbaugh, who announced this week that he is suffering from pronounced lung cancer, and staging the surprise reunion of a U.S. service member back from a tour in Afghanistan with his family, including two young children.

In a rare moment of bipartisanship on policy, Democrats and Republicans stood to applaud as Trump introduced Juan Guaidó, Venezuela's opposition leader whom the United States has recognized as that nation's rightful president over the authoritarian regime of Nicolás Maduro.

For Trump's adversaries, the evening offered a reminder that he remains in a strong position for reelection with nine months to go. After months of testimony from former Trump administration officials who sketched a picture of a president working with a team of outside advisers, including his personal lawyer Rudolph W. Giuliani, to pressure a foreign leader for his own political gain, Democrats had hoped to win the battle of public opinion even if the president's GOP allies ultimately protect him in the Senate trial.

Trump did not mention the Democratic presidential contenders vying for the nomination to challenge him in November. But ahead of the speech, he sought to create a sense of momentum for his presidency and reelection campaign, offering it as a contrast to the Democrats, who were reeling in the wake of their botched Iowa presidential caucuses, the results of which were still not fully known nearly 24 hours after polls closed Monday evening.

The president and his surrogates touted his own easy victory in the GOP caucuses in Iowa, a result that is expected of an incumbent, promoting it as a sign of Republican Party unity. Trump gloated in a series of tweets, mockingly suggesting Democrats would blame "RUSSIA, RUSSIA, RUSSIA, instead of their own incompetence" - a reference to the 17-month special counsel investigation into Russian interference in the 2106 presidential election and the Trump campaign's contacts with Russian operatives.

"The Democrat Party in Iowa really messed up, but the Republican Party did not," Trump declared.

Trump touted the low unemployment rate and spiking stock market, new trade deals with Mexico, Canada and China, progress on construction of a wall on the U.S.-Mexico border, and the killing of Islamic State leader Abu Bakr al-Baghdadi and Iranian general Qasem Soleimani.

The Gallup poll released Tuesday puts Trump's approval at 94 percent among Republicans, where it has held steady, and 42 percent among independents, up five points since early January. The survey highlighted the stark partisan divide - just 7 percent of Democrats approve, making the 87-point gap between the parties the largest in Gallup's history - but it also laid bare how low unemployment and strong economic growth have powered Trump's standing recently: 63% of Americans approve of his handling of the economy, up six points since November.

In his speech, Trump highlighted successful legislation to provide federal workers with paid family leave, his administration's investment in a new Space Force branch of the military and efforts to slash "job-killing regulations."

Twice he railed against the ills of socialism, possibly intended as a dig at Sen. Bernie Sanders, I-Vt., self-described "democratic socialist" who is a leading contender for the Democratic nomination.

In an apparent attempt to clean up a recent suggestion that he would consider cutting entitlement spending, Trump said: "I have also made an ironclad pledge to American families: We will always protect patients with preexisting conditions. And we will always protect your Medicare and your Social Security." Trump and Republicans, however, are asking the courts to toss out the Affordable Care Act, which guarantees protections for preexisting conditions, and have not offered any replacement.

With the president commanding a national audience in the tens of millions, the Democrats faced an uphill task in countering his message. The party tapped a young female governor from a Midwestern swing state, Michigan's Gretchen Whitmer, 48, to offer their rebuttal, in an address that traditionally reaches a far smaller television audience.

Like the president, she did not mention impeachment, focusing on health care and pocketbook issues, a message that helped Democrats take control of the House and win several key statewide elections in the 2018 midterms.

"It doesn't matter what the president says about the stock market," Whitmer said. "What matters is that millions of people struggle to get by or don't have enough money at the end of the month after paying for transportation, student loans or prescription drugs."

But the policy talk was promptly overshadowed after the formal remarks were over as the vicious political combat resumed. Asked by a reporter what she thought of Trump's speech, Pelosi responded bluntly: "I tore it up."