A study by Visa, the leader in digital payments, revealed that Thai consumers spent the most during the Christmas holiday period last year, accounting for 30 per cent of total holiday spending in 2019, ahead of King Bhumibol’s Birthday Anniversary, New Year’s Eve, Chulalongkorn Day, Chinese New Year and Songkran.

The Visa Holiday Study analysed anonymised data from VisaNet, one of the world’s largest electronic payment networks, to gain a better understanding of Thai consumers’ spending habits during holiday periods. The data will be used to help create and improve payment solutions and offers in collaboration with Visa’s partners.

Suripong Tantiyanon, Country Manager for Visa Thailand said: “At Visa, we always look for innovative ways to add value to our partners and consumers. One way is by harnessing the vast amount of data that flows through our global network VisaNet, in the most secure and ethical ways. Visa’s Consulting & Analytics team analysed the data used in the Visa Holiday Study to provide insights that will support our partners and the industry to grow their businesses and further the adoption of digital payments in Thailand”. 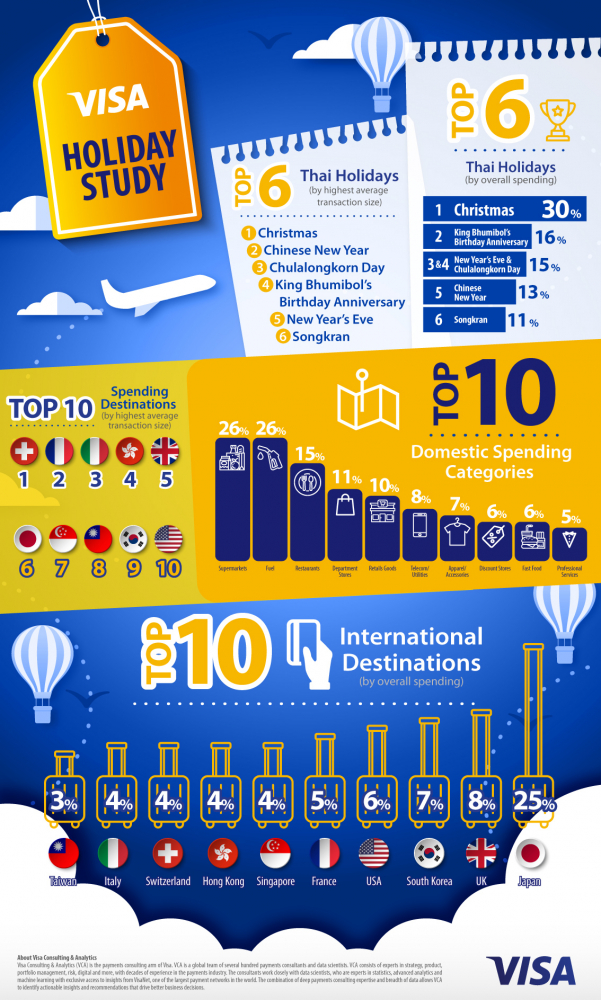 “Thai Visa cardholders are enjoying the speed, convenience and security of electronic payments no matter where or how they choose to spend their holidays. We hope these insights in Visa’s Holiday Study will be helpful to everyone in the industry and beyond as we continue to transition towards a cashless future,” concluded Suripong.