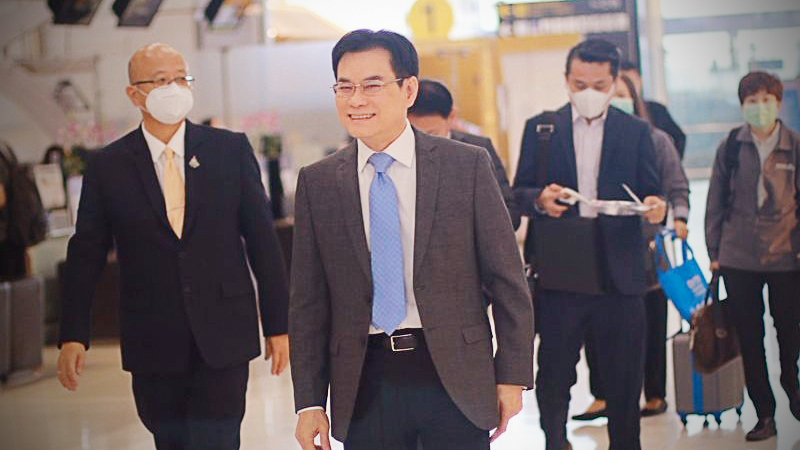 Jurin Laksanawisit in the middle.

Representatives of the departments of International Trade Promotion, Foreign Trade and Trade Negotiations were in Cambodia on Friday (February 7) for the opening of “Top Thai Brands” at the Diamond Island Convention and Exhibition Centre in Phnom Penh.

The promotional event continuing through Sunday is expected to draw 100,000 visitors and pull in Bt350 million in revenues.

International Trade Promotion said its chief aim was to promote small and medium-sized enterprises, expand exports and enhance the image of participating businesses.

The show has wares from 185 companies, of which 112 are Thai and 50 of those are based outside Bangkok. The Commerce Ministry made sure six blocks were set aside on the show floor for entrepreneurs based along the Cambodian border.

Thai-Cambodian trade was worth Bt282.48 billion last year, with Bt214.32 billion coming from exports. The figures are expected to increase this year.

Deputy Prime Minister and Commerce Minister Jurin Laksanawisit, thanking Cambodian authorities for their collaboration, will witness the signing of three memoranda of understanding between Thai and Cambodian entrepreneurs during the event.

The deals envisioned are worth a combined Bt210 million.