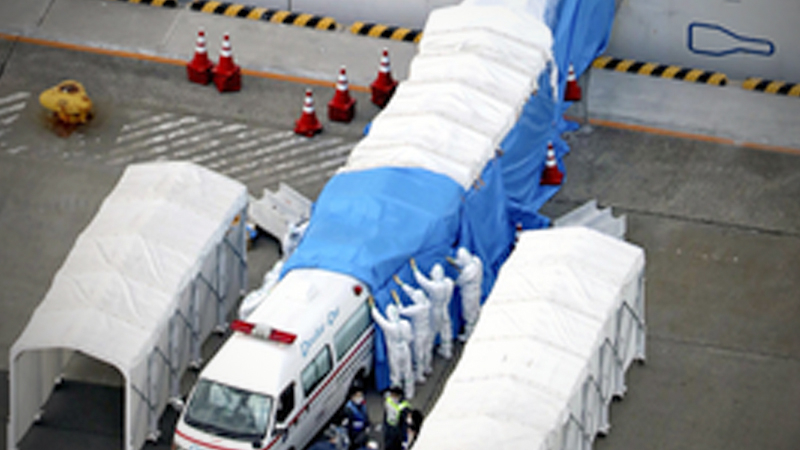 YOKOHAMA, Japan - For now, only the sick can leave.

In the four days since the Diamond Princess cruise ship quarantined around 3,700 passengers and crew members in a Japanese port, the few dozen who have disembarked were wheeled off on stretchers and helped into ambulances. They coughed and ached and burned with fever - the latest to fall ill as the coronavirus outbreak spreads rapidly across Asia.

Growing desperate after days of being cooped up, Vana Mendizabal, 69, suddenly realized: What if her only escape route from the ship and the mandatory 14-day quarantine would be to come down with the virus?

She is one of hundreds of Americans stuck on the cruise ship halfway around the world, in a confinement that is one of the strange repercussions of the coronavirus epidemic that was first documented in Wuhan, China, in December. Since then, more than 31,000 people have been infected and more than 630 people have died - most of them in China. Cases have also been recorded in more than two dozen countries.

Vana Mendizabal's travel insurance won't arrange an evacuation unless she falls ill. Japan won't allow anyone off the ship unless they are being transported to a hospital or have completed at least two weeks in quarantine. U.S. officials have not offered another solution to evacuate American passengers who are anxiously holed up on the cruise liner.

Mendizabal and her husband, Mario, 75, who are from Crystal River, Florida, feel stranded as they run out of clean clothes and patience.

"We are trying to somehow reach the State Department in hopes they will get us off here," Vana Mendizabal said in a phone call from the couple's cabin. "We are confined to our cabins, we're breathing recirculated air, and it's not a healthy environment for us to be staying in."

"We just want to get off the ship," she said. A friend with whom the Mendizabals are traveling learned Thursday that her mother had died back home, news that compounded their group's sense of urgency.

A State Department official said Friday that U.S. officials were closely tracking the situation aboard the ship and that "once the passengers on the Diamond Princess finish their 14-day quarantine period, they will be permitted to depart Japan on commercial flights, which are readily available, and will not be subject to additional quarantine upon return to the United States."

But as the number of sick steadily ticked up to 61 Friday, fears mounted among passengers that the quarantine could potentially expose them to the virus rather than protect them from it.

The outbreak on the ship is believed to have begun when an infected passenger carried the virus onto the ship, later disembarking in Hong Kong.

Alan Steele, 58, is among the dozens of people aboard the cruise liner who have since learned they have the virus. Steele and his wife, Wendy, married last month and were celebrating their honeymoon with a cruise vacation that has turned into a nightmare.

"I have been infected and am being transferred to hospital," Alan Steele said via Facebook Messenger on Friday. "Must say I am not showing any symptoms at the moment."

Wendy, a nurse, is to celebrate her 52nd birthday Tuesday, and her husband was to start a new job Monday.

The couple was reluctant to be separated but only Alan tested positive for the virus and disembarked for treatment.

"It was a hard first night without Alan," Wendy said the next morning. But she added that the pair are in constant communication and that "Japanese doctors are excellent and he is in safe hands."

All who tested positive have been or will be taken to local hospitals for treatment.

Of the most recent 41 found to have the virus, 21 are in their 70s and six are in their 80s, Japan's public broadcaster NHK reported, citing the Ministry of Health.

Japan's tourism industry has been badly hurt by the epidemic, and fears are mounting that the 2020 Tokyo Olympics could be disrupted. Aside from the 61 cases on the cruise ship, 25 people have tested positive for the virus in Japan.

A second ship, the World Dream, is being quarantined in Hong Kong, pending test results and health checks for the 3,800 people aboard, after three passengers who sailed between Jan. 19 and Jan. 24 tested positive for the virus.

Japanese Prime Minister Shinzo Abe said Thursday that foreigners would not be allowed to get off a third cruise ship, the Westerdam, which left Hong Kong on Saturday, except in special circumstances. The country's transport minister on Friday said similar measures would be implemented for other cruise ships if there were fears of infection aboard.

Aboard the Diamond Princess, the tests were carried out on passengers and crew members deemed at highest risk of having caught the virus after an initial health screening, either because they showed symptoms or because they had interacted with the infected passenger who disembarked in Hong Kong.

The remaining passengers have been issued thermometers to check their own temperatures. And they've been left trying to make the best of a strange situation.

The only interactions passengers have with anyone outside their cabins are visits by crew members delivering and removing food trays several times a day.

Some passengers do not seem to mind.

American passengers Matthew Smith and his wife, Katherine Codekas, both 57, regularly vacation on cruise ships and said even this experience on the Diamond Princess won't put them off taking another trip.

"The only thing now is not to think about how much time remains," Smith said. "You just kind of take it day by day, moment by moment, and that's not so bad."

On Twitter, Smith posted a photo of food that had been delivered to his room: salmon, fresh bread and chocolate cake.

"You might have to drag me off the ship when the quarantine ends," he wrote, complimenting his feast.

On Thursday, some passengers were allowed to spend time on a deck so long as they wore masks, kept at least three feet apart and avoided using elevators. They have been given rubber gloves to wear outside their cabins.

But for some passengers, even just a few days in quarantine seem impossibly long. When the Mendizabals planned their three-week vacation, they did not imagine they would be in for an extra two weeks away from work and home.

"It's been very disruptive," Vana Mendizabal said. "It's very stressful."