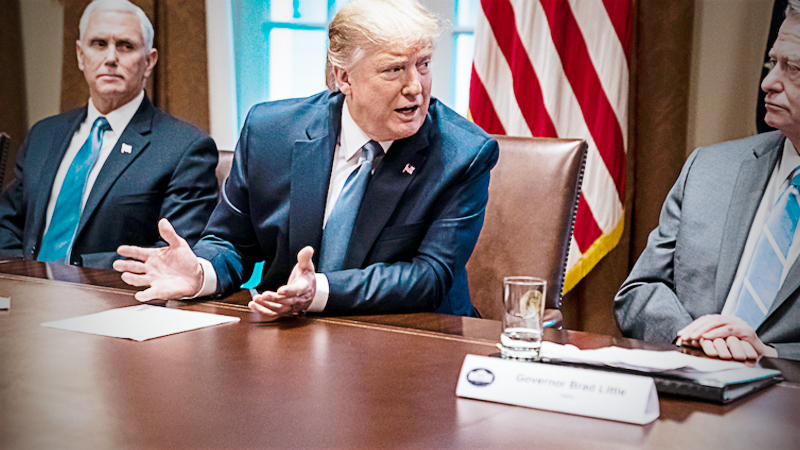 WASHINGTON - President Donald Trump has again proposed to reduce the value of federal retirement benefits while requiring most federal employees to pay more toward those benefits.

In some cases the benefits would be reduced only for future retirees but in other cases those already retired would face a cut as well.

The proposals, outlined in Trump's budget released Monday, would require changes in law. They likely will face opposition from Democrats in Congress and federal employee organizations that have thwarted them in prior years.

Legislation already has been introduced in the House and Senate by several Democrats for an average 2021 raise of 3.5 percent.

Trump's proposals would "align federal compensation with the private sector," a budget book says, referring to a 2017 Congressional Budget Office study that found salary to be comparable on average between the two sectors. But the study also found the federal benefits package to be superior, resulting in "total compensation" advantage of 17 percent for federal workers.

"The disparity-which varies significantly by education level-is overwhelmingly attributable to benefits. CBO found that, in comparison to the private sector, the Federal Government continues to offer a very generous package of retirement benefits, even when controlling for certain characteristics of workers," the budget says.

An annual comparison by a salary advisory council that does not take benefits into account shows that federal employees are substantially underpaid-by 27 percent on average in the most recent report.

The two reports use different methods and different sets of data, however; the CBO report further cautioned that comparisons of benefits are difficult, especially regarding retirement.

Tony Reardon, president of the National Treasury Employees Union, said in a statement: "For the fourth year in a row, President Trump's budget proposal would starve federal agencies to the point of paralysis, pick the pockets of middle-class federal workers and their families, weaken our nation's nonpartisan, merit-based civil service, and deprive Americans of the basic services and protections they expect from their government."

The budget plan, for the fiscal year starting Oct. 1, once again calls for requiring employees covered by the Federal Employees Retirement System to increase the amount they must pay toward their retirement benefits.

For most employees, that would mean an increase of about 6 percentage points; employees hired since 2012 already pay at somewhat higher rates so the increase would not be as large for them.

The required amount would increase by 1 percentage point per year until the employer and employee contributions are equal.

That proposal would not affect those under the Civil Service Retirement System, who were first hired before 1984 and who now account for less than a tenth of federal workers.

The budget also would eliminate a supplemental payment that also applies only in the FERS system for those who retire before age 62. That payment is roughly equal to what they will receive in Social Security benefits and is paid until they reach age 62 and can start receiving those benefits.

Prior versions of that proposal have specified that it would apply only to those retiring after a future date.

Another proposal that would apply only to future retirees would base their annuity calculations on their highest five consecutive years of salary rather than the currently used three years.

Yet another would apply to annual cost of living adjustments to retirement benefits under both retirement programs. It would eliminate the inflation adjustment for those receiving annuities under the FERS program while lowering the CSRS adjustment by a half percentage point.

The budget projects that changing inflation adjustments as proposed would reduce their value to current and future retirees by $53.6 billion over the next 10 years.

Eliminating the annuity supplement and changing the annuity calculation formula would reduce their value to future retirees by $19.9 billion and $8 billion over that time, while the increase in required contributions toward retirement would cost employees $87.4 billion, it said.

A final proposal would reduce the interest rate paid in the Government Securities G Fund of the Thrift Savings Plan, the 401(k)-style retirement savings program for federal employees. That fund consists of special Treasury Department securities that in recent years have paid about a 2 percent interest rate.

The proposal would reduce that rate to a small fraction of 1 percent, reducing the return to investors by a projected $10.5 billion over 10 years.

"We oppose a change to the G Fund interest rate as it would make the G Fund inadequate and ineffective for TSP investors and would meaningfully impact the retirement savings of millions of Thrift Savings Plan participants," TSP spokeswoman Kim Weaver said in an email.

Of the $633 billion in the TSP as of year-end 2019, about 40 percent was in the G Fund. That fund is especially popular among retirees and those close to retirement because of its stability.