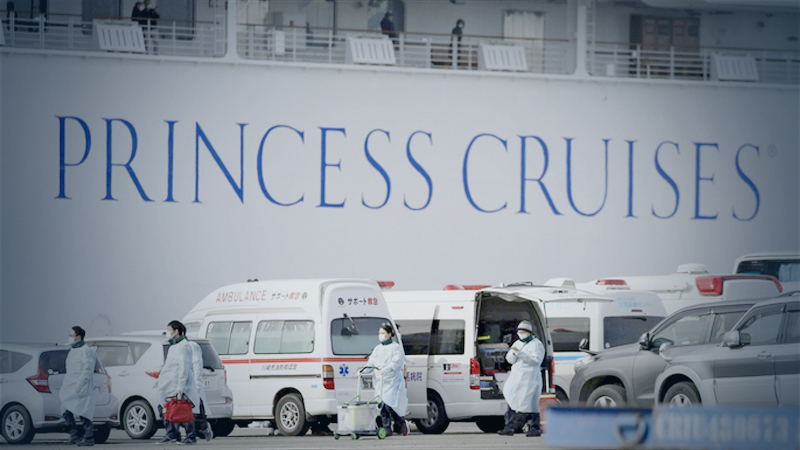 ​TOKYO - The new coronavirus continues to spread on the Diamond Princess cruise ship in the Port of Yokohama.

As of Wednesday morning, more than 170 people had been infected, and the coronavirus was found to have spread to a quarantine officer for the first time as well. Crew members who come into contact with many people as they move around the ship and deal with passengers are also concerned.

“If we stay on the ship like this, we might all get sick,” a Japanese crew member in her 20s told The Yomiuri Shimbun on Wednesday morning. She said she was concerned about the increasing number of infected people on board.

During the cruise, which lasted until Feb. 3, the woman served passengers at duty-free shops and spas on the ship. After returning to Yokohama, she was tasked with escorting people to the deck. Working in an environment where everyone is at risk of infection “exhausts crew members,” she said.

Passengers are kept in isolation in their cabins, but crew members eat buffet-style in the crew’s dining room and use shared tongs when serving themselves. The woman did not wear a mask for several days after returning to port, due to limited supply.

When the ship returned to Yokohama, 2,666 passengers and 1,045 crew members were on board. So far, a few of the crew members have tested positive for the virus.

“We come in contact with many passengers as well as other crew members. I just want everyone to be examined and for them to let us off the ship,” she said.

Binay Sarkar, an Indian who is believed to be a member of the crew, posted a video on Facebook with several of his colleagues stating that they were scared because they did not know who was infected. Sarkar urged the government to expand its testing, which is currently limited to those who have developed symptoms.

The anxiety of the crew is beginning to show in the way they deal with passengers.

An elderly passenger who is still required to stay onboard said a Japanese crew member accidentally brought medication that was supposed to go to another passenger on Feb. 9. When the passenger said, “This isn’t mine,” the crew member took the medication back but would only touch it with his fingertips.

“The atmosphere seems to be that the crew doesn’t want to touch anything that the passengers have touched. I keep hoping I’ll be able to get off the ship safely, but I’m not sure I can hold on for that long,” the passenger said anxiously.