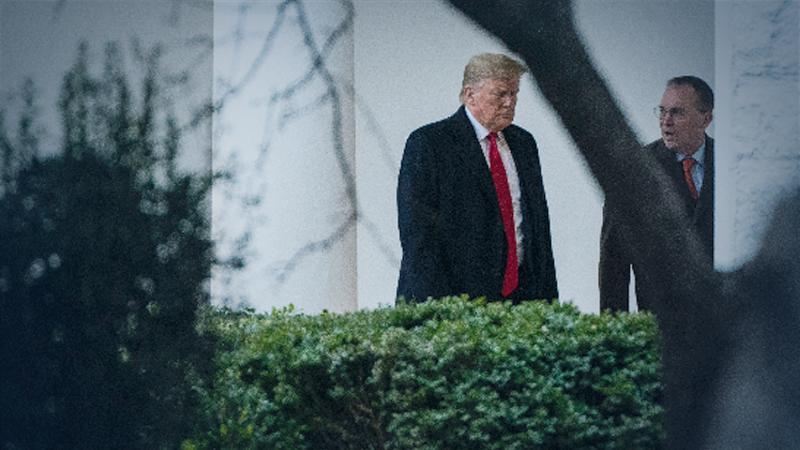 I have to hand it to President Donald Trump. Not only is he the rare politician to understand the most powerful, insidious but overlooked dynamic in American presidential politics, he has now become the first to fully weaponize it.

For 32 years, I have been reporting in this newspaper about the effect of height on electoral success. No other journalist or political scientist ever seemed inclined to heed my research, but Trump recognizes this unhappy truth: Height is destiny. All too often, the taller candidate wins.

His fascination with stature has been on display over the past four years, as he has repeatedly tarred his antagonists - even those who aren't actually short - with unsubtle diminutives: "Little Marco" Rubio, "Little Katy" Tur, "Little Rocket Man" (Kim Jong-un), "Liddle' Bob Corker," "Liddle' Adam Schiff." (The House impeachment manager is reportedly 5-foot-11.)

But these had the feeling of mere playground taunts. Now he is expanding his epithets into rants. This month, Trump explicitly raised the issue of height as if to suggest it is central to political leadership. In a pre-Super Bowl interview, Fox's Sean Hannity asked him what he thought of candidate Mike Bloomberg.

Bloomberg, the former mayor of New York, is 5-foot-8. His camp has denied asking for a box. On Tuesday, Trump was harping on height again with an insinuating message on his retweet of an old golf-course photo of the two of them. "Mini Mike is a short ball (very) hitter. Tiny club head speed. KEEP AMERICA GREAT!"

I started writing about this in 1988 - the year George H.W. Bush (6-2) faced off against Michael Dukakis (5-8) - because I thought it was wrong to judge candidates by their height. I never imagined anyone would take my heartfelt research and use it to diminish opponents. Now I'm less eager to take credit for exposing this flaw in our system. I am afraid of what happens next.

Granted, it can be hard to get a handle on the exact heights of these image-sensitive public figures. Trump said he was 6-foot-3, a number that still circulates in online search results, but in the televised 2016 primary debates he was clearly shorter than 6-foot-3 Jeb Bush, who stood next to him. Politico found evidence that Trump's 2012 driver's license put him at 6-foot-2. And while Hillary Clinton was 5-foot-5 in 2008, according to her spokesperson, by 2016 the anonymous brain trust of Google had decreed that she was 5-foot-7.

So Trump had a 7- to 9-inch advantage over his opponent, the most since 1864 when Abraham Lincoln beat George McLellan, 10 inches shorter. Some pundits argued his unusual decision to cross the stage behind Clinton during the Oct. 9, 2016, presidential debate was an attempt at physical intimidation. Nonsense: He just wanted to make his height advantage clear.

Since 1952, when many voters had their first chance to see presidential candidates on television, 12 of the 17 contests have been won by the taller person. And no shorter candidate has ever succeeded overcoming a deficit larger than five inches - the gap between George W. Bush and John Kerry in 2004.

Heightism is wrong. The electoral bias against us short people should be exposed and eradicated. I don't have a solution yet. I rather liked the idea of boxes behind the debate lecterns, but now Trump has spoiled that.

Blatant heightists may argue that taller people make better presidents, pointing to Lincoln, our tallest. I note that two of our worst chief executives, James Buchanan and Warren G. Harding (both 6-foot), were among the big guys.

The bias goes back to our species' earliest days, when pecking-order struggles were often settled by larger humans winning the fights. Height became synonymous with power and competence. Which may be the reason that taller people are more likely to get the big promotions, while those of us with height challenges are picked only for tasks like tunneling out of prisons or acting as stunt doubles for Danny DeVito.

In my lonely, early years of reporting on this, I had difficulty convincing people that height was a valid issue. Some campaign spokespeople would laugh at me when I asked how tall their candidates were. But my persistence has given height analysis a bit more respectability. Campaign officials now readily answer the question, although they may still snicker while typing the email.

Democrats running for president, in rough order of height, include Joe Biden (6-foot), Bernie Sanders (6-foot), Tom Steyer (5-10), Pete Buttigieg (5-9), Elizabeth Warren (5-8), Amy Klobuchar (5-8) and, as I said, Bloomberg (5-8). Please alert me if you know any of those numbers to be wrong. Campaigns tend to exaggerate.

Trump, meanwhile, has faced a GOP challenge from Bill Weld (6-3) and, until he abandoned the race Friday, Joe Walsh (6-foot). Trump is unlikely to debate Weld because his true height would be revealed if he stood next to the former Massachusetts governor.

Klobuchar suggested at the Democratic primary debate in Iowa that height didn't matter. "You don't have to be the tallest person in the room," she said. She's wrong! We have to accept the truth before we can fix the problem!

I apologize for that emotional outburst. I admit that below-average height is not a total bar to success. The current owner of The Washington Post, whom I revere, is only 5-foot-7. But I am often the puniest person in the room, and it's getting worse. In 1988 when I started writing about this, I was 5-foot-5¾. I haven't checked in many years, so I got out the tape measure. I am down to 5-foot-4.

Perhaps I should take comfort in the fact that three of the last five presidential elections (2000, 2004, 2012) have been won by the shorter person. An unconscious sense of injustice may be sinking in. Even at 6-foot-2, Trump is taller than any of his likely opponents, but he is sloppy with his facts, which might hurt him. Two of the men on his short list, Schiff and cable-news personality Donny Deutsch (5-10), are actually at or above the average height for adult American males (5-10).

I am upset when Trump demeans the undersized. But I also empathize with him, and the anxiety that leads him to pretend he is taller than he is. Having come from the reality-TV environs of show business, he knows how important height is. Some of his fellow celebrities have gone to great lengths to disguise the truth. Men's Health magazine once looked at published heights and checked them against reality. It found that Charles Bronson was 5-foot-7, not 5-foot-11; Burt Reynolds was 5-foot-8, not 5-foot-11; and Arnold Schwarzenegger was 5-foot-10, not 6-foot-2.

A tweet from Trump on this subject would help. He seems committed to what he's doing, but I have hope he will see the light. You don't have to admit anything, Mr. President. Just call for an end to the posturing and comparing. It would be a boon to those of us still shrinking, with no end in sight.