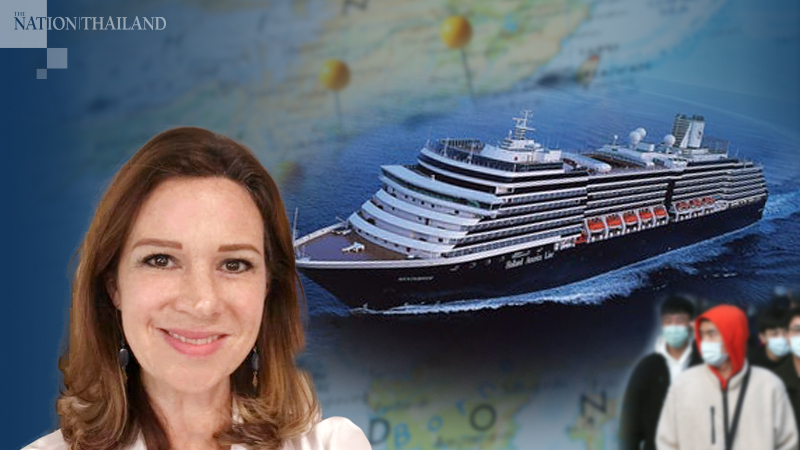 Christina Kerby was corralled aboard a massive luxury cruise ship, charting a meandering course somewhere in the South China Sea, when she began thinking about the apocalypse.

Luckily, the WiFi on Holland America's MS Westerdam was plentiful. She tapped out a tweet.

"Here's a science fiction plot line for ya," she wrote. "Amidst a global epidemic that wipes out the earth's population, it's up to the people aboard one cruise ship - the only safe place on earth - to repopulate the planet. **Passengers onboard the #Westerdam begin eyeing each other nervously**"

It was an idea that befit her new dystopian reality - but instead of a sci-fi thriller, she was going for lighthearted comedy. The way she saw it, there wasn't much else she could do, as her long-planned vacation was ensnared in a global frenzy over a fast-spreading disease and the story of her cruise ship had spiraled into international news.

Kerby boarded the ship in Hong Kong on Feb. 1, but hundreds of other passengers had been cruising since Jan. 21, riding a route that was supposed to ferry them north, from Cambodia to Japan. Soon after Kerby got on, plans began to change.

Four times the Westerdam tried to dock at ports across East and Southeast Asia, and four times it was turned away, rebuffed by governments frantically trying to protect their countries from the spread of coronavirus, now known as covid-19. Authorities are wary of cruise ships after infections rose aboard the Diamond Princess, which is quarantined at a port in Yokohama, Japan. Strict new measures have also banned from ships anyone who has recently traveled in China.

Even after the cruise line decided to cancel the rest of the trip, it struggled to find a country nearby that would allow its legions of passengers and crew to disembark and catch flights home.

Holland America tried to reassure officials in Japan, Taiwan, the Philippines and Thailand: the ship is virus free, the company said again and again, no known or suspected cases on board. On Monday, the crew told passengers they'd be able to get off in Bangkok, the cruise aborted but fully refunded.

But by the next day, they'd been told once more they were unwelcome. They'd have to keep floating, with no end in sight.

That's about when Kerby, a 41-year-old who works in health care communications, decided to start tweeting.

"I felt like it was really important to dispel some of the fears and misconceptions about what was going on in the ships," Kerby told The Washington Post in an interview from the ship. "I was reading a lot of really scary and negative media reports and I thought, this is not giving an accurate picture of what's going on, so I wanted to bring some truths and some positivity to the mix."

Because life aboard the ship bore little resemblance to the dire plot Kerby outlined in one of her tweets - at least for the passengers, who paid a premium to ride the stately Westerdam, recently remodeled with a new bar and something called the Music Walk, which includes a "Lincoln Center Stage" and a "B.B. King's Blues Club."

Kerby was traveling with her 75-year-old mom, a mother-daughter trip she had eagerly anticipated, and when coronavirus fears scuttled their plan, she endeavored to make the best of a bad situation. Her Twitter account became a live, public diary of the unexpectedly adventurous cruise. She has posted two dozen times, sharing photos and videos, opening a window into the strange pattern of life on board.

The ship was stranded, on the verge of a geopolitical crisis, but the revelry did not stop.

Counting passengers and crew, there were roughly 2,200 people aboard, making the Westerdam's population about the same as a midsize New Hampshire city. Even with all the idle minds, bodies and time, Kerby said, the entertainment was constant and meticulously planned. She praised the cruise employees, who had to cancel trips to see family when the ship couldn't dock and who have worked grueling hours for weeks in a row.

In cruise ship parlance, days traveling between ports are known as "sea days," when the crew must arrange full days of events to amuse the boatload of people.

There was the illusionist who performed magic tricks, the dueling pianos that played the hits, the nacho bar that came back every day. Then, the pièce de résistance: the chocolate surprise, when a parade of waiters appeared carrying trays piled high with chocolates.

In between performances, Kerby sat by the pool, attended spin classes and practiced folding pool towels into animals, a pastime that, aboard cruise ships, has been elevated to art form. She went to a hair salon and attended a watch party for the Academy Awards, which aired Monday morning ship time - all without stepping foot on land, like a floating summer camp.

Her Twitter missives have kept family and friends informed and have buoyed the spirits of passengers and crew, one of whom left a handwritten note at her cabin door, thanking her for the posts, the "witty sense of humor" and the "positive attitude."

Her mother has enjoyed the ride, and Kerby remains relentlessly optimistic. But she did concede that the stress and uncertainty has been difficult at times. Nearly 8,000 miles away, in California's Bay Area, Kerby's husband and two young children have tracked her journey.

"I was starting to get concerned as the days went on," her husband, Tony Martin-Vegue, said in an interview.

He wasn't worried she was in danger from the disease, he said, but was concerned that a government would overreact.

"I thought, uh oh, at this point, anything can happen," Martin-Vegue said. "She could be stuck on the cruise line for month or in quarantine on some military base because of innuendo, not necessarily facts."

"I have a new understanding of cruises and how they work and how truly out of control you are," he added. "If she were in a hotel in Hong Kong, she'd have more options, but she's completely at the mercy of the cruise liner and local governments."

But when Martin-Vegue saw her first few tweets, he knew Kerby would be all right.

"This is just her magic power," he said. "She turns any situation into something positive."

Kerby said she has drawn on her work with an organization called the Medical Clown Project, which sends trained clowns to hospitals to help families cope with illness. Aboard the ship, she saw passengers anxious and annoyed. She decided to channel her inner clown.

"I thought, well, this is an opportunity to give that a try in a stressful situation and see if I can lighten the mood," she said. "I've always been the type of person to lead with humor."

On Wednesday, for the second time in three days, Kerby tweeted "Homeward bound!" But this time, she was hopeful it was for real. The Cambodian government had agreed to allow the Westerdam to dock at a port on the country's southwestern coast. Holland America said in a statement that "All approvals have been received and we are extremely grateful to the Cambodian authorities for their support."

The U.S. Ambassador to Cambodia also tweeted his thanks. Kerby posted a video of passengers bopping to a cover of Bill Haley's "Rock Around the Clock" in celebration. When she woke up Thursday, local time, Kerby could see land. The ship was anchored near Sihanoukville, and the crew said they'd be off soon, after a health check.

Finally, the cruise to nowhere had a destination.