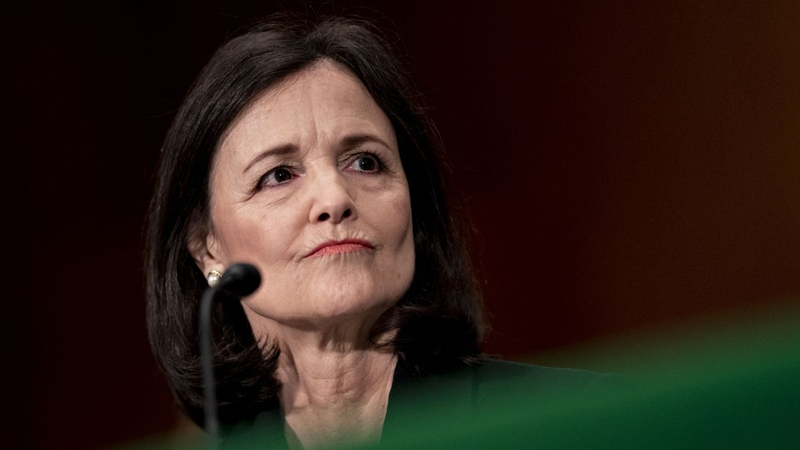 WASHINGTON - President Donald Trump's nominee to the Federal Reserve appears to be in danger of rejection by the GOP-controlled Senate after she struggled to defend what one Republican senator called "outlier" views during a confirmation hearing on Thursday.

Judy Shelton, a longtime Republican, is known as an outspoken critic of the Federal Reserve and for advocating that the United States return to something akin to the gold standard, which the nation abandoned in 1971. She has alarmed many in the financial world by calling for more coordination between the Fed and the White House. She has also altered some of her views to appear more in line with Trump's aggressive push for lower interest rates, spurring more concerns that she might not uphold the Fed's independence from politics.

Three GOP senators on the Senate Banking Committee publicly said Thursday that they are undecided about whether Shelton should have a seat on the nation's most powerful economic policy-setting board that sets interest rates and oversees a significant amount of bank regulation. It would only take one Republican no-vote to stall or derail her confirmation in the committee. The White House has emphasized a commitment to standing fully behind Shelton, who said several times during her confirmation hearing that she would bring "intellectual diversity" to the Fed.

"I believe everyone has the right to criticize the Federal Reserve, including the president, every member of Congress and every citizen," Shelton said, adding that it's "refreshing" that Trump's Fed bashing is "out in the open," compared with some past presidents, such as Ronald Reagan, who did so in private.

Shelton is the latest in a string of problematic Fed nominations for the president. Trump's prior two candidates - businessman Herman Cain and conservative pundit Stephen Moore - both had to withdraw because of dicey personal issues. Republicans have shown a greater willingness to push back on Trump when it comes to the Fed, one of Washington's last remaining institutions that is considered free of politics. Two other Fed nominees were also passed over.

Her supporters like that she would bring a contrasting voice to the Fed board and a lighter touch on regulation. Critics say her views are so far outside the mainstream that she would be dangerous at the Fed and undermine the central bank's reputation for apolitical decision-making. Trump has made no secret that he regrets picking Jerome Powell to be Fed chairman, and there's concern that Trump would be quick to elevate Shelton to the top job at the central bank when Powell's term expires in early 2022 - if he were still president.

Sen. Patrick Toomey of Pennsylvania and Sen. Richard Shelby of Alabama, top Republicans on the Senate Banking, Housing and Urban Affairs Committee, told reporters after the hearing that they had "concerns" about her.

Toomey said he was "not sure" if Shelton would uphold Fed independence, a key tenet for the central bank. Shelby said Shelton sounded like she "could be an outlier" for such a key position at the helm of the U.S. economy.

Policy analyst Isaac Boltansky of Compass Point Research put Shelton's confirmation chances at "no better than a coin flip." Two banking lobbyists who spoke on the condition of anonymity to speak freely predicted that she would make it out of committee but not come up for a full Senate vote.

"I don't claim to be in the mainstream of economists," Shelton told the Banking Committee on Thursday as she tried to defend and, in many cases, soften some of her more controversial views from the past four decades.

Lawmakers on the committee, including some Republicans, sharply questioned Shelton about her views on the gold standard, her Trump ties and her past opposition to federal deposit insurance, which currently backs consumer deposits up to $250,000 at U.S. banks.

"Let's go back to the gold standard," Shelton wrote in a 2009 opinion article in The Wall Street Journal. "Under a gold standard, if people think the paper money printed by government is losing value, they have the right to switch to gold."

At the hearing, Shelton distanced herself from such writings and told senators that they misunderstood her position on the gold standard, saying instead, "I would not advocate going back to a prior historical monetary arrangement."

In her 1994 book, "Money Meltdown," Shelton wrote that "eliminating federal deposit insurance would restore the essential character of banking." But at the hearing on Thursday, she denied that she wants to get rid of the popular program that has been a bedrock of the U.S. banking system since the 1930s.

"I think that having deposit insurance is essential to maintain trust in the American banking sector. I was merely using an example to explain moral hazard," she said Thursday.

Democrats pounced on Shelton for flip-flopping as evidence she should not be confirmed, saying they were unclear what her views are and feared she might change them to appease Trump. Sen. Robert Menendez, D-N.J., questioned why Shelton had missed 11 of 26 board meetings when she was serving as U.S. executive director to the European Bank for Reconstruction and Development for much of 2018 and half of 2019.

"Showing up is a basic requirement of the job. If any of us missed half of our votes, half of our hearings, I don't think our constituents would send us back," Menendez said.

Shelton previously told The Washington Post that she had to travel back to Washington to meet with Treasury Department officials and that she had made all the key meetings at the EBRD, which is headquartered in London. She made a similar argument at the hearing, but Menendez replied that she could have just called the Treasury.

Some Republican senators were also clearly uneasy during the hearing.

"I do have some trouble with some of your writings," Shelby said. After the hearing ended, he told reporters that he is "still concerned."

Toomey told reporters that Shelton had not alleviated his concerns that she would uphold Fed independence and that he had not decided how he would vote. Toomey has broken occasionally with Trump in the past, such as when the president asked Congress to approve a national emergency at the U.S.-Mexico border.

Sen. John Neely Kennedy, R-La., also said he has not made up his mind about whether to support her nomination.

"I'm undecided," Kennedy said after the hearing, adding that it doesn't bother him that someone might change their mind on a position but that "nobody wants anybody on the Federal Reserve that has a fatal attraction to nutty ideas."

Many Democrats said Shelton was acting like a "new Judy," by distancing herself from previous writings or saying lawmakers misunderstand the context in which she had said unconventional things.

"We don't know who we are nominating for the Federal Reserve. Ms. Shelton has disavowed 40 years of her writing to say what she needs to say to be confirmed," said Sen. Sherrod Brown of Ohio, the top Democrat on the Banking Committee.

Shelton has a PhD in business administration from the University of Utah and has spent years as a conservative scholar and head of the Sound Money Project, for which she has spoken often about ways to transition back to a gold standard. She was also an adviser to Trump's 2016 campaign and has called for a big monetary conference to take place at Mar-a-Lago, Trump's Florida resort.

Sen. Mike Crapo, a Republican from Idaho and chair of the Banking Committee, accused Democrats of a "orchestrated, calculated effort" to discredit Shelton.

But opposition remains strong among many economists and Wall Street investors to her nomination. The Washington Post reached out to 17 economists after the hearing and just five, or fewer than a third, said they supported her for the job. If confirmed, several said they worried that she would be the "heir apparent" for Fed chair, a role that would make her one of the top economist policymakers in the world.

"The most problematic thing about Judy Shelton is the fact she changed her tune," said Danielle DiMartino Booth, CEO and chief strategist of Quill Intelligence and a former adviser to former Dallas Fed President Richard Fisher. "I am concerned she might be politically malleable."

The White House continues to express full support for her nomination and that of Christopher Waller, a St. Louis Fed economist who is Trump's other nominee for the two open seats on the Fed's seven-seat board.

"The nominations of Judy Shelton and Christopher Waller are not being pulled," said White House spokesman Judd Deere. "The White House expects both to be confirmed by the Senate."

Larry Kudlow, Trump's top economic adviser who helped select the nominees, also said he was "completely confident" that she would be confirmed.