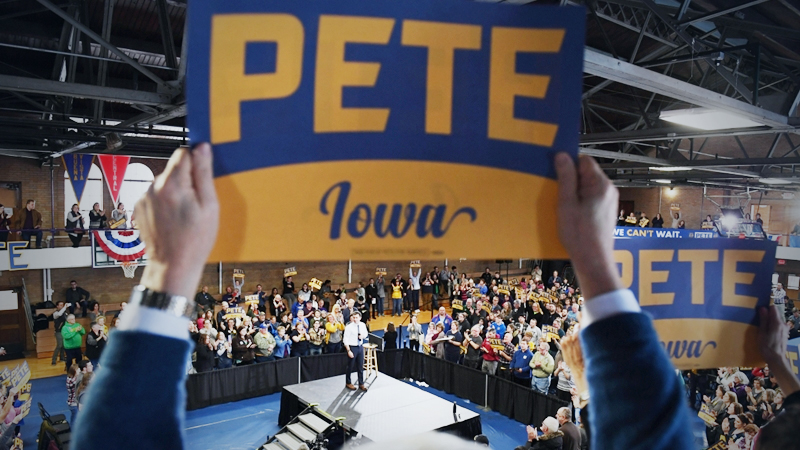 By The Washington Post · Amy B Wang, Chelsea Janes

Allies of President Donald Trump have sharply focused attention on the sexual identity of presidential contender Pete Buttigieg in recent days, questioning in stark terms whether Americans are ready for a gay candidate who kisses his husband onstage.

The attacks are prompting blunt responses from Buttigieg's allies and even his Democratic rivals, who call the remarks inappropriate and offensive. The exchanges were ignited by radio host Rush Limbaugh, who received the Presidential Medal of Freedom from Trump last week and who framed his comments as an ostensible analysis of how Democrats feel.

The episode abruptly injected the topic into the political discussion after months when it had a lower profile. And it underlines a notable feature of Buttigieg's rise: An openly gay, married candidate has never gotten so far in the presidential arena, and it's not clear how some voters will react.

The episode is a window into what Buttigieg could face if he becomes the Democratic nominee. Buttigieg did not publicly address Limbaugh's remarks, but his surrogates and supporters pushed back.

Elliot Imse, spokesman for the Victory Fund, which supports LGBTQ candidates, said it's clear the Trump camp would "use homophobia to try and define who Mayor Pete is as a person and as a candidate." He added, "That will likely backfire with most of America if we are able to expose the homophobia for what it is and refocus quickly on who Pete is as a candidate."

Victory Fund staffers deliberated internally on whether to respond to the comments since they did not want amplify them. But given Limbaugh's high profile, the group decided it needed to respond.

"The real question is who wants to kiss Rush Limbaugh," the group tweeted Thursday. "But seriously folks: we must watch for and rally against this type of hate. It will not go unanswered in November."

Meanwhile, Limbaugh's comments quickly reverberated around right-wing circles; the Federalist, a conservative magazine, defended them as "not homophobic," saying he was simply asking, albeit in an "uncouth" way, how voters would respond to a gay candidate.

On his own radio show Wednesday, Sebastian Gorka, a former deputy assistant to the president and a Trump campaign surrogate, questioned "what right" Buttigieg had to talk about abortion rights.

"Why is a homosexual man lecturing us about the sanctity of life in the womb? Just a little curious there. Strange, strange," Gorka said. "I thought you're supposed to stay in your lane as a leftist. You can't comment on the lived experience of the other."

Conservative radio host Ben Ferguson said Wednesday he had no problem with Buttigieg being gay, though he seemed to be implying Buttigieg was less masculine because he was gay when he posted on Twitter, "For people who don't think "masculinity" matters in elections call this former Presidential candidate!" He appended a photo of 1988 Democratic nominee Mike Dukakis in a tank, the subject of ridicule at the time.

Now that early primary results have solidified Buttigieg's role as a top contender, some of his allies are bracing for more attacks.

Previous candidates have sometimes decided to confront identity issues directly: Barack Obama delivered a highly personal talk on race in 2008, and John F. Kennedy gave a major speech about his Catholicism in 1960 to a group of Protestant ministers.

So far the Buttigieg campaign has evidently concluded that ignoring the remarks is the best course, but that could change if the attacks become louder and more frequent, or show signs of resonating more widely.

It was in part because Limbaugh's remarks spawned other comments in conservative circles that some of his allies felt the need to respond Thursday.

"Rush is a nasty and hateful person who lives in a bigot bubble and doesn't realize he's out of touch with America," Imse said. "We want to avoid giving Rush any more attention than he deserves, but when he says something as outrageous as he did and it's already making the rounds, I think it's important that our community and mainstream media expose his homophobia for what it is."

Limbaugh's remarks also prompted a defense from former vice president Joe Biden, who is running against Buttigieg for the Democratic nomination.

"I mean, my God," Biden said, after hosts on ABC's "The View," where he appeared Thursday, played clips of Limbaugh's comments. "It is part of the depravity of this administration . . . Pete and I are competitors, but this guy has honor, he has courage, he's smart as hell."

Buttigieg's campaign did not respond to a request for comment. His campaign rarely discusses the prospect that he will be vilified for his sexual orientation, and Buttigieg himself almost never utters the word "homophobia."

When voters ask how he will handle attacks from Republicans, he almost always gives the same line: "We can't allow him to change the subject," Buttigieg often says, adding: "I grew up gay in Indiana. I'm not afraid of bullies."

Still, Buttigieg did not come out when he was growing up. He often talks about thinking he could be either a politician or openly gay but not both.

When he did reveal he was gay, during his reelection campaign in South Bend, Indiana, he faced pushback, although he also won decisively. Early in his presidential campaign, when he was still largely unknown, he said his office was already receiving vitriolic messages.

"It doesn't matter much," he told The Washington Post at the time. "The criticisms that really get to you are ones you take seriously, ones that might be right. When someone's attacking me over a decision I made that might be wrong, that's going to make me stop and think . . . If someone calls me a faggot - OK."

Since Buttigieg's strong performances in Iowa and New Hampshire, journalists have begun raising the issue of his sexuality more frequently, prompting responses like his recent comment to People magazine that he was excited to start a family "soon" with his husband Chasten.

"No matter what happens, I think the next chapter in our personal lives is going to be about kids," Buttigieg said.

Some reactions are less celebratory. In a video that recently went viral, an Iowa woman who supported Buttigieg, then learned he was gay, asked whether she could change her vote. "He'd better read the Bible," the woman said in the video.

Colorado Gov. Jared Polis said the fact that he and other openly gay politicians have won statewide shows the limits of such attacks. He said he did not think his sexuality swayed voters either way, since anti-gay conservatives would be unlikely to support a Democrat in any case.

"I'm obviously pro-choice; there's obviously voters who didn't vote for me because they're pro-life," he said in an interview. "They might not like my orientation, it might not be consistent with what they would want for themselves, but I'm completely convinced that if there were a pro-life candidate who was gay they would vote for that person over a straight person who was pro-choice."