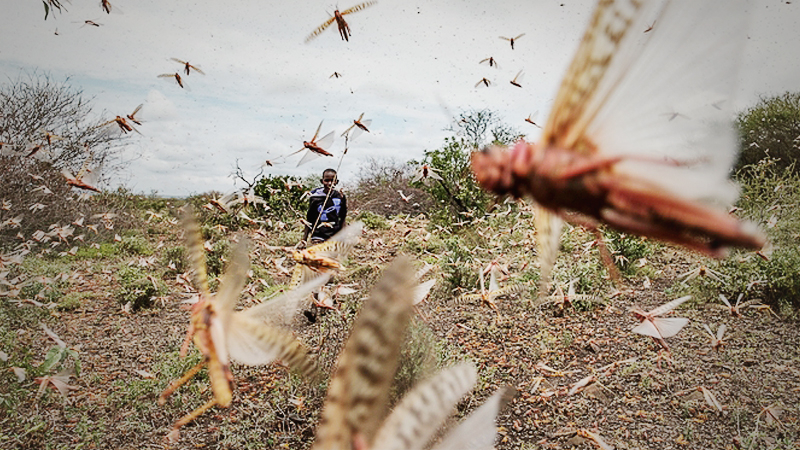 A youngster runs making noise in order to scare away from their homestead a swarm of desert locust, in the zone of Borena, Ethiopia, on February 1. Photo by Eduardo Soteras Jalil for The Washington Post.

BORENA ZONE, Ethiopia - From a distance, it looks like billowing smoke. But as it nears, the swarm of locusts comes into focus: Billions upon billions of them, thick as a blizzard, uncountable as raindrops, a jaw-dropping procession of the ravenous creatures of biblical infamy, flailing and flapping in the air, blocking out the sun like a bad omen.

The pests, known and feared by the world's most ancient civilizations, are invading southern Ethiopia and neighboring parts of Kenya in numbers not seen in generations.

They breed freely in areas outside government control in conflict-ravaged Yemen and Somalia, and they reach their voracious adolescence while migrating west toward the feeding grounds of lusher inland Africa. Unseasonable rain, linked to a climate-change-driven event in the Indian Ocean, has turned the region into a buffet for locusts.

"Our only option is to try to kill them all," said Bayeh Mulatu, a pest control expert at the United Nations' Food and Agriculture Organization (FAO) in Addis Ababa, Ethiopia's capital. A similar surge of locusts in northern Ethiopia in 1954 devoured nearly 100 percent of green-leaf plant cover and, along with a drought, caused a year-long famine, Bayeh said.

Despite technological improvements, the prospects of control remain slim. Hundreds of swarms have hatched in the sandy soil of Yemen and Somalia's coastal plains, where little to nothing is being done to control them. Ethiopia has only three operational planes to spray insecticides, and Kenya has five. Meanwhile, the biggest of the swarms are getting closer every day to Ethiopia's breadbasket in the Great Rift Valley, where smaller swarms are already stripping some farms.

"There is no such thing as containment of locusts," Bayeh said. "There is only control. Only killing."

The funding is "required by, actually, now," said FAO chief Qu Dongyu at a recent news briefing. "If after April the money has come, it's somehow useless."

Ethiopia is likely to be hit the hardest by the infestation, which began last June but is only now reaching epic proportions. While giant swarms have been reported in Kenya, and smaller ones in Djibouti, Eritrea, Sudan and Somalia, Ethiopia is the only country among them where adolescent or "gregarious" swarms are expected to descend en masse on cropland. The locusts moved into Uganda this week and may move into South Sudan, the United Nations warned.

"Our resources are not enough," said Zebdewos Salato, director of plant protection at Ethiopia's Agriculture Ministry. "Soon we may see the locusts passing over the whole country, into the major crop-growing regions."

Years of drought have led to widespread dependence on food aid in the region, and sudden rains have sparked deadly flash floods. In a cruel twist, an unusual, prolonged rainy season has alleviated some of the pressure on food supplies but also provided the ideal conditions for locust reproduction.

Farmers in southern Ethiopia were lucky that the biggest swarms didn't show up here until January, after the harvest season. But now new seeds of corn and wheat are in the ground - as are hundreds of billions of locust eggs.

The weather anomaly is caused by an El Niño-like event in the Indian Ocean that once occurred about every 10 years but that studies show has become more frequent, as well as more intense. The events lead to heavy rainfall in East Africa - which saw eight cyclones off its coast last year - and dry conditions in Australia, exacerbating bush fires there.

Rainy conditions are expected until at least June, setting the stage for those swarms-in-waiting to devour the coming harvest.

"In our culture, we celebrate the locusts because their arrival means rain," said Haphi Elema, a farmer and rancher who lives on an isolated homestead in southern Ethiopia and belongs to the Borana community. "But we know that if they stay longer than the rain, then they will eat everything and we will starve."

Elema's family relies on the surrounding shrub land for food for their cattle and goats. With continued rain, the leaves and grass regenerate quickly, but every day is still a fight against the appetite of the swarms.

"First we used my gun to scare them with the sound," he said. "Then we made big fires. Now we spend all morning chasing them off the plants, but they are too many."

The Ethiopian government has encouraged what it calls "cultural methods" of fending off the swarms, like the ones Elema described. They also have positioned scouts on the top of prominent hills to keep a lookout for swarms and send text messages to regional officials about their movements. But spraying malathion, an insecticide, is the only way to kill entire swarms.

The pilots can effectively spray swarms only when the insects are on the ground. Because locusts are coldblooded, they have little energy before the day warms up, and the best spraying time is early in the morning. Unfortunately, frequent early-morning rain often prevents spraying missions, and pilots reach the swarms when they are already in the air, spread out over miles and miles.

"They ride up on thermals [or updrafts] as high as 3,000 feet," said Andrew Van Zyl, a South African who flies a spraying plane called an Air Tractor for a private company contracted by the Ethiopian government. "The swarms are thick enough that they block the plane's air intake. The conditions are actually quite dangerous."

On a recent day, Van Zyl returned from a spraying mission and his plane was covered with greasy locust guts, so much so that he could barely see through his windshield.

The Ethiopian government and the United Nations are agitating for more money to stave off the nightmare scenario: A plague that sweeps across the heartland, leaving decimated fields in its wake. With the aid of wind, locusts can travel 100 miles in a day. That means they are already well within striking distance of vast amounts of farmland that feeds Africa's second most-populous country.

"We cannot sit idle. If we did, the whole region would be infested. It would become a huge, huge crisis," said Bayeh, the FAO expert. "The conditions are perfect for them; 2020 - it is the year of the locust."