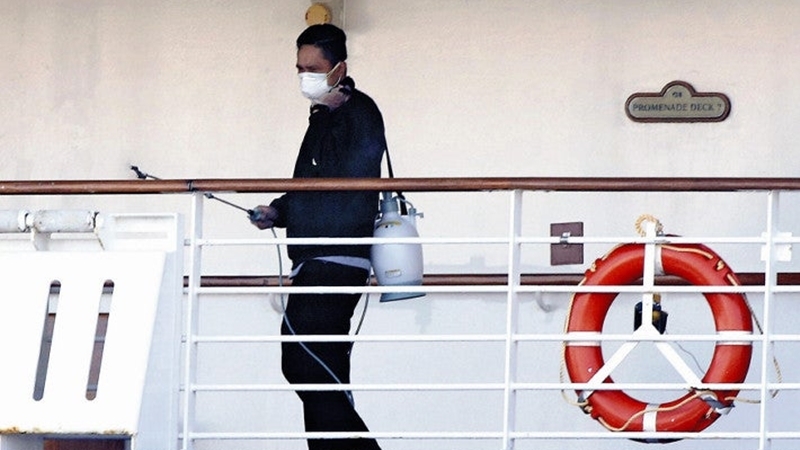 An area on the Diamond Princess cruise ship where passengers walked is sprayed on Feb. 13, 2020 in Yokohama, Japan. MUST CREDIT: Japan News-Yomiuri

As the new coronavirus continues to spread, the government decided Thursday to ramp up emergency steps such as reinforcing the nation's quarantine system and accelerating checks for the virus.

These moves come after the mass infection that has occurred on the Diamond Princess cruise ship exposed the limitations of steps taken so far to deal with the outbreak.

"We must take the concerns of the public seriously and further strengthen our efforts," Prime Minister Shinzo Abe said the same day at a meeting of the Novel Coronavirus Response Headquarters at the Prime Minister's Office. All Cabinet ministers attended the meeting.

The enhanced steps specifically include establishing a support system that will enable quarantine officers from around the nation to be assembled during an emergency situation, and crafting a system that enables the National Institute of Infectious Diseases to check a larger volume of samples at once. The countermeasures also included a plan to respond flexibly to cases involving passenger ships such as by refusing to allow passengers and others to disembark.

"All these steps were based on the assumption of a mass infection occurring, like the one that has happened on the cruise ship," a senior government official said.

The number of people infected on the liner has increased to more than 200. One Cabinet minister was unable to conceal his shock at the rising figure, saying, "It's like the virus 'epicenter' of Wuhan in China has shifted across to Japan."

A man from Hong Kong who was later diagnosed with the virus boarded the cruise ship in Yokohama on Jan. 20 and got off in Hong Kong on Jan. 25. Although authorities think the infections spread on the ship before it returned to Yokohama Port on Feb. 3, the government's response to the outbreak has always been one step behind. The reason for this is the "flag state principle" under international law, which holds that the nation in which a ship is registered is responsible for enforcing regulations on the vessel when it is on the open sea.

Consequently, Britain's laws applied to the British-flagged Diamond Princess - and the Japanese government could not legally issue instructions to the liner - until it arrived in Japanese territorial waters. According to sources, even after the World Health Organization declared a global health emergency on Jan. 30, parties and other events were held on the cruise ship, suggesting that measures taken to prevent the virus from spreading were insufficient.

The Health, Labor and Welfare Ministry decided, after 10 people on the ship tested positive for the virus on Feb. 5, to demand that all passengers stay in their cabins for two weeks in principle. The government's initial response, according to a senior official of the ruling coalition party Komeito, was "blunted" by a system in which quarantine inspections were not sufficient and medical facilities were not equipped to accept so many people.

The nation's first confirmed death because of the coronavirus on Thursday has made the government nervous about how the international community will react.

Since the virus was confirmed to have infected people in Japan, four Pacific island nations including Samoa have restricted entry to people traveling from Japan. According to Russian media, a Russian Foreign Ministry spokesperson blasted Japan during a radio program on Monday, saying the nation's response had been "chaotic" and "ad hoc."

Chief Cabinet Secretary Yoshihide Suga hit back at those claims on Thursday. "We are staying in very close contact with the embassies and other channels of affected nations, such as Russia, and we have carefully explained the steps taken," Suga said at a press conference. "We have thoroughly implemented measures to combat the virus."