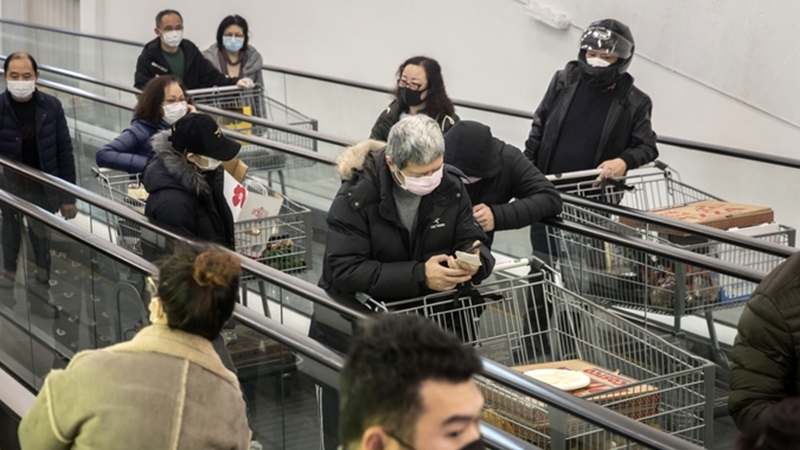 Shoppers move through a supermarket in Shanghai on Feb. 14, 2020. MUST CREDIT: Bloomberg photo by Qilai Shen.

China has upended expectations around the coronavirus epidemic this week with changes to the data and the way cases are diagnosed, forcing a dramatic recalculation of where the country stands in containing the spread.

On Friday, China's National Health Commission lowered the country-wide death toll by more than 100 and the infected case count by more than 1,000 due to "double-counting" in Hubei, the province at the epicenter of the outbreak.

The lowering came a day after a shock 45% surge in new cases of nearly 15,000 was reported by Hubei due to the inclusion of a revised method to diagnose infections.

The changing numbers, and the reluctance of Chinese health officials to sufficiently explain the inconsistencies, has crushed optimism that the epidemic is waning.

A: On Friday, China revised its total death toll lower to 1,380, saying that 108 cases had been removed due to "double-counting" in Hubei.

It also removed 1,043 cases from the official national count of infections, bringing the total number to 63,851, for the same reason.

The revisions came a day after Hubei added 14,840 additional cases of people infected with the novel coronavirus in its daily information release, the biggest spike ever in the crisis.

That surge was attributed to the inclusion of a new group of patients diagnosed through the use of CT imaging scans -- so-called clinical diagnosis -- alongside those confirmed by the previous method of nucleic acid testing kits.

The additions raised the total number of people infected in Hubei by 45% in one day and pushed the global total over 60,000 cases.

On Friday, the second day of the adjusted methodology, Hubei reported 4,823 additional cases, of which 3,095 were diagnosed with the CT scan method.

Q: What does it mean for the numbers going forward?

A: While it's now clear that the nearly 15,000 additions on Thursday were a one-off adjustment, the latest figures are still roughly double what the province was reporting daily before the new method was used, and reveals the scale of the outbreak is larger than previously realized.

But the deletion of cases for double-counting further confuses matters, raising the prospect that the new numbers could have inflated the true picture.

Q: Why was the change made?

A: It's been widely reported that the nucleic acid testing kits used worldwide can be unreliable. There is also a severe shortage of tests and medical personnel to carry out the procedure in Hubei.

"A patient may be found as negative for the first or second test, and then found to be positive the third time," said Jonathan Yu, a doctor at a university hospital in Wuhan, in an interview last month. "It is like fishing in a pond: You did not catch a fish once, but that does not mean the pond does not have fish."

There also aren't enough test kits and medical staff to do the specimen scrub in Hubei province, where medical facilities are at breaking point. People have reported standing in line for hours to get tested, only to be sent home if the result is negative, even if they have a fever and cough.

A: Not necessarily. CT scans can show signs of pneumonia in a patient, but this could be caused by another virus like the common flu, said Sanjaya Senanayake, an infectious diseases specialist at the Australian National University in Canberra.

So the new method of counting may include patients who have pneumonia, but not the coronavirus. Making matters worse is the possibility that such patients could end up in the same hospital wards as those who actually do have the virus, putting them at risk of infection from being in close quarters.

One advantage that CT scans have over the nucleic acid tests is speed, said Bloomberg Intelligence industrial and medical analyst Nikkie Lu. Each machine can screen approximately 100 to 300 patients a day, while nucleic acid tests take about two hours each.

A: In an update to its treatment guidelines on Feb. 5, China's National Health Commission added the category of "clinically diagnosed cases" in recognition of a shortage of nucleic acid tests. But Hubei province didn't include this category in its case count until Thursday, a week later.

A spokesman at the National Health Commission said doctors in Hubei should have started diagnosing patients using CT scan images shortly after the update was released on Feb. 5, and it isn't known why Hubei didn't start reporting the clinically diagnosed case number sooner.

Chinese authorities also announced the replacement of the top officials in Hubei on Thursday. The failure of the previous officials to update the count could be why they were removed. Or, the timing of the expanded tally may represent an attempt to allow the new party secretary to start with a fresh slate.