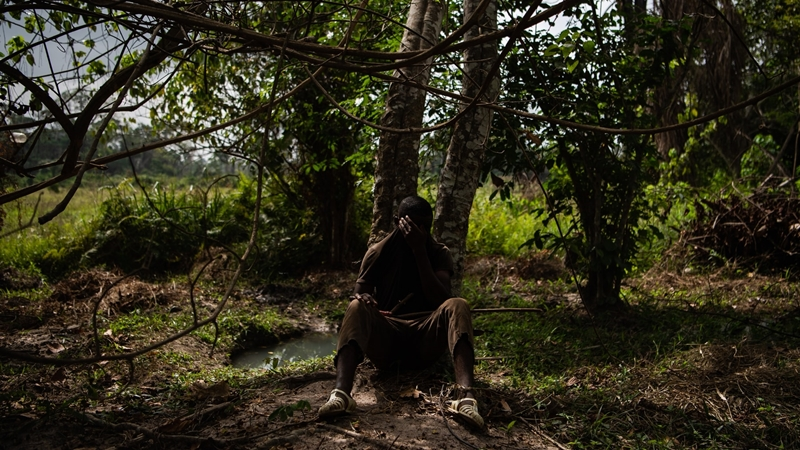 Abou Traore, 15, from Burkina Faso, sits against a tree drying the sweat on his face after drinking milky-colored water that he scooped with plastic bottle from a pond on a cocoa farm where he's working with other children on March 15, 2019, near the village of Niambly, Côte d'Ivoire. MUST CREDIT: Washington Post photo by Salwan Georges

Human rights advocates petitioned U.S. customs Friday to stop some of the world's largest chocolate companies from importing cocoa from Ivory Coast, the world's most important supplier, unless they can show that it was not produced with forced or trafficked child labor.

Child labor on cocoa farms is widespread in Ivory Coast and elsewhere in West Africa, and human rights advocates have sought for more than two decades to halt the practice by bringing pressure to bear on the large chocolate companies who buy cocoa from that region. It is the source of most of the world's supply.

The petition filed by three human rights groups Friday included video and audio files that they say provide evidence they have gathered of children working on Ivorian cocoa farms, as well as indications that the children were trafficked there for that purpose.

The video and audio files were not made public for the protection of the children, they said, but it is consistent with other reports from West Africa. The petition also cited evidence from a number of other sources - newspaper articles, documentaries, government reports - of child labor on Ivorian cocoa farms.

The legal action seeks to force Nestle, Mars, Hershey, Mondelez, the owner of the Cadbury brand, and other companies to produce evidence by August that the cocoa they're importing is produced without forced or trafficked child labor. Without such proof, the groups said, U.S. customs should use its authority to block the Ivorian cocoa imports.

"This investigation was a result of many years of inaction on the part of the cocoa industry," said Charity Ryerson of the Corporate Accountability Lab, which filed the petition with International Rights Advocates and the Civil Rights Litigation Clinic at the University of California Irvine School of Law. "We needed to push back on the companies' claims that they were taking meaningful steps against child labor. Our investigation showed that their efforts have been woefully inadequate."

A June story in The Washington Post depicted children from Burkina Faso who were working on Ivorian cocoa farms. The story also noted that representatives of some of the biggest and best-known brands could not guarantee that any of their chocolates were produced without child labor.

After the story, U.S. Customs and Border Protection officials opened an investigation into forced child labor on Ivorian cocoa farms.

About two-thirds of the world's cocoa supply comes from West Africa where, according to a 2015 Labor Department report, more than 2 million children were engaged in dangerous labor in cocoa-growing regions. The next census of child labor in the region is due in March.

Most of those children are working on impoverished family farms, but some are trafficked into the cocoa farms from neighboring countries.

Exactly how many are in a situation of "forced labor" is a matter of dispute.

A representative of the chocolate industry said that forced child labor in Ivory Coast is "extremely rare" and that a ban on Ivorian cocoa would be counterproductive.

"This irresponsible call for a U.S. ban on cocoa imports from Côte d'Ivoire will hurt, not help," Richard Scobey, president of the industry group World Cocoa Foundation, said in a statement. "It could push millions of poor farmers deeper into poverty, even though the vast majority of them are innocent of such practices, and threatens to damage the economy and security of a vital U.S. partner in West Africa."

Scobey noted that the Ivorian government has at times conducted raids to stop the child-trafficking, halting buses of unaccompanied children coming from Burkina Faso.

The State Department has indicated, however, that Ivory Coast appears ill-prepared to police child trafficking because the budget for the anti-trafficking program is "severely inadequate." As State Department officials noted in a 2018 report, the primary police anti-trafficking unit is based in the nation's economic capital, Abidjan, several hours away from the cocoa-growing areas, and its budget was about $5,000 a year.

In response to the allegations of child labor, the large chocolate companies say they condemn child labor and point to efforts that they say will eradicate the practice from their cocoa suppliers.

To address child labor issues, Mars has what it calls the Protecting Children Action Plan. Nestle and others use a program called the Child Labor Monitoring and Remediation System. Hershey promotes a program called Cocoa for Good, and Mondelez has Cocoa Life.

The human rights advocates, however, say that such efforts have fallen far short.

The world's chocolate companies have missed previous deadlines to uproot child labor from their cocoa supply chains in 2005, 2008 and 2010. This year, they face another target date and, industry officials have indicated, they probably will miss that, too.