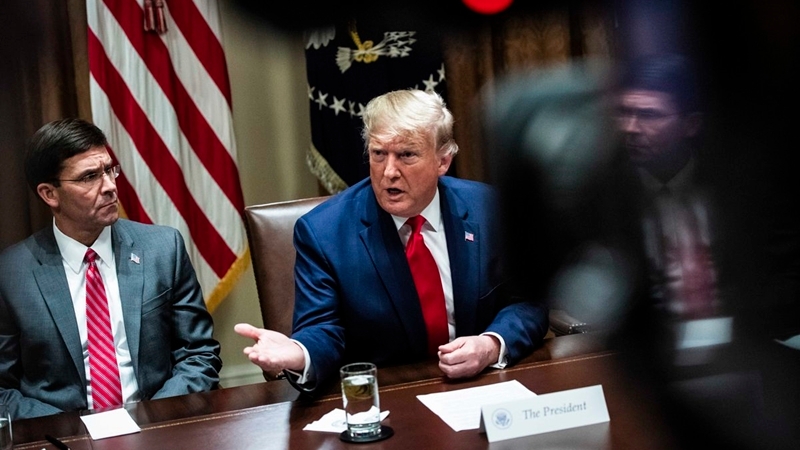 WASHINGTON - A White House memo justifying the U.S. strike that killed Iranian military leader Qasem Soleimani in early January makes no mention of an imminent threat, which was President Donald Trump's rationale for the attack.

The two-page memo made public by the House Foreign Affairs Committee on Friday instead says the Soleimani strike was carried out in response to previous attacks and to deter Iran from conducting or supporting attacks in the future.

"Although the threat of further attack existed, recourse to the inherent right of self-defense was justified sufficiently by the series of attacks that preceded the January 2 strike," the memo reads.

Congressional Democrats, and some Republicans, were furious that Trump approved a deadly military attack that threatened to escalate tensions in an already strained region without consulting Congress. They cast doubt on whether the White House had reacted to thwart an imminent threat.

"This official report directly contradicts the president's false assertion that he attacked Iran to prevent an imminent attack against United States personnel and embassies," said House Foreign Affairs Committee Chairman Eliot Engel, D-N.Y. "The administration's explanation in this report makes no mention of any imminent threat and shows that the justification the president offered to the American people was false, plain and simple."

A spokesman for the National Security Council said the White House had no further comment beyond the memo.

The letter appeared to confirm what Democrats had suspected almost from the start about the lack of a specific, immediate threat to U.S. forces or other personnel that would merit the killing of Soleimani and his traveling party almost immediately after he had arrived at the Baghdad airport. U.S. intelligence agencies have tracked Soleimani for years.

The administration gave shifting descriptions of the immediacy and scope of the threat, with Trump and Secretary of State Mike Pompeo initially claiming that the strike had been taken to avert an urgent, imminent threat to American lives and Embassy infrastructure.

Trump said the threat to diplomats and other personnel was "imminent."

The killing was "in response to imminent threats to American lives," Pompeo said on Twitter on Jan. 3. Later the same day, Pompeo told CNN that Soleimani had been actively plotting "a big action" that "would have put dozens if not hundreds of American lives at risk" in the region.

The administration produced no evidence of such an immediate threat and two days later, Pompeo appeared to soften his description. "It's a collective. It's a full situational awareness of risk and analysis," Pompeo said on NBC's "Meet The Press."

A week later, after Trump had said the threat included targeting of four embassies, his Pentagon chief demurred.

"I didn't see one with regard to four embassies," Defense Secretary Mark Esper said on CBS's "Face The Nation." "I share the president's view that probably, my expectation was, they were going to go after our embassies."

Iran retaliated with airstrikes on bases housing U.S. personnel in Iraq, injuring scores, but both nations stepped back from possible war.